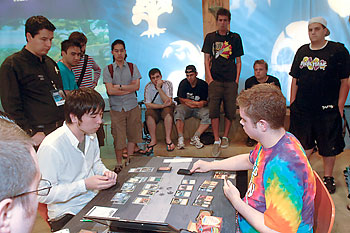 Shuhei Nakamura and Rasmus Sibast draw a crowd. A former Player of the Year and well-traveled Pro Tour warrior, Shuhei Nakamura is one of the very best Japan has to offer. His opponent, [http://www.wizards.com/Magic/Magazine/Events.aspx?x=mtgevent/ptpra06/wel... Tour–Prague Top 8 competitor Rasmus Sibast, doesn’t have quite the same resume, but he is no slouch in the 40-card formats. Known affectionately as “Big Oots” by his friends on Tour, the young player lost the die roll to the seasoned vet from Asia.

Nakamura kicked things off with a second-turn Tidehollow Strix, then followed it up with a Talon Trooper. Rasmus worked on fixing his mana by landcycling a Sylvan Bounty, then showing off a Naya mana base. He cycled Jund Sojourners to deal with his opponent’s 2/1 Strix, drawing a card in the process, but could only watch as Nakamura played yet another flyer in the form of Scavenger Drake.

Oblivion Ring hit the board for Sibast, nailing the Talon Trooper, and at five mana Shuhei Nakamura simply passed the turn without making a play. When Rasmus attempted a Rakka Mar, however, Shuhei revealed why: Soul Manipulation netted him his Tidehollow Strix back and countered the legendary four-drop.

Trying to keep his head above water, Rasmus Sibast made a Skyward Eye Prophets, staring down an opposing board that included Scavenger Drake, Zombie Outlander, Frontline Sage, and Brackwater Elemental. At 11 life, Sibast didn’t have forever to get something going. Looking to buy himself some breathing room, Rasmus played Captured Sunlight to gain 4 life, revealing a free Soul’s Fire he used to blow up the Scavenger Drake.

Nakamura had an Esperzoa to keep the pressure on, comboing it with Kaleidostone to net himself an additional card each turn in the process. Sibast worked hard on grinding out as much advantage as he could from his Skyward Eye Prophets, but they were simply netting him cards, not solutions—that is, until he plopped Dragon Broodmother onto the table. The 4/4 immediately promised to control the skies, providing numerous flying chump-blockers each turn, Verdant Force–style, should Shuhei fail to have an answer.

An almost all-in attack from Shuhei, however, put Sibast in a bad position, and wound up costing him most of his board. When Shuhei revealed an Ethersworn Shieldmage, Rasmus didn’t get the trades he was expecting, putting him further behind than anticipated and costing him his Broodmother in the process. When he failed to find help from two activations out of his Skyward Eye Prophets (one on Shuhei’s end step and one on his own turn), he scooped up his cards for the second game. 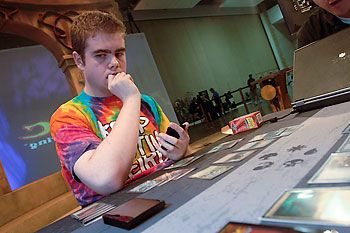 'Big Oots’ brings many colors to the table.Neither player had much in the form of exciting action during the early turns of their second game, with Shuhei breaking parity first on the back of a Frontline Sage. His follow-up was Sewn-Eye Drake that attacked for 4, thanks to exalted, but Sibast was ready. He used a cycled Jund Sojourners to kill the Drake, and had Dragonsoul Knight to start getting on the board himself.

Skyward Eye Prophets and Giltspire Avenger were next up for Rasmus, who was trying to overwhelm Shuhei with more powerful cards. Not to be outdone, Nakamura had a Wall of Denial and not one but two Jhessian Zombies in an attempt to fear his way to victory. Once Giltspire Avenger was active, however, the Japanese super-pro had a really tough time getting in profitably. Before long, Sibast had assembled domain to change his Dragonsoul Knight from Knight to Dragon, and the Skyward Eye Prophets revealed a Sphinx of the Steel Wind. It wasn’t looking good for Shuhei Nakamura at all.

A Brainbite from the Japanese all-star revealed his opponent’s hand to be Deathbringer Thoctar, the previously revealed Sphinx, and Kiss of the Amesha. Shuhei took the Sphinx, but when Rasmus revealed yet another card for Skyward Eye at the end of the turn, Shuhei conceded rather than drag out the inevitable.

The match was headed to the third game, and Rasmus Sibast’s deck had demonstrated it was packed to the brim with powerful rares. Shuhei Nakamura, on the other hand, had a deck that was slightly less powerful on a card-by-card basis, but was considerably more focused inside the Esper triad. That led to better mana draws and a more cohesive strategy overall. The crowd leaned in to see what would happen. 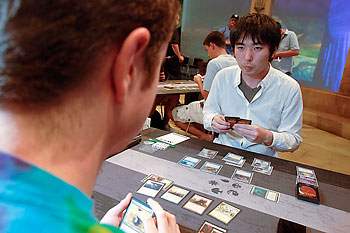 Shuhei’s style, and his deck, are more subdued.Zombie Outlander from Shuhei Nakamura was met by Dragonsoul Knight from Rasmus Sibast. Nakamura followed up with a Sanctum Gargoyle, albeit one that did not return anything from the graveyard. Sibast opted to work on his mana base, landcycling Jhessian Zombies and Gleam of Resistance, before playing an Esper Cormorants. The 3/3 would help stem the beats from Shuhei’s Gargoyle, but Nakamura came right back with a hasty Sewn-Eye Drake.

With no blocks the previous turn, Sibast had taken a full 7 damage, but when he played Deathbringer Thoctar, it became abundantly clear why he wanted his creatures in play. The more they died after the Thoctar hit play, the more future creatures of Shuhei’s he’d be able to destroy with the Thoctar’s +1/+1 counters. Shuhei used a Brainbite to try to stay in things, but was forced to take Sphinx of the Steel Wind for the second game in a row, leaving Soul’s Fire in Sibast’s hand. When the removal spell hit the board to take out Nakamura’s Sanctum Gargoyle, it got the Thoctar chain going. At one counter, Rasmus could blow up the Sewn-Eye Drake at his leisure, and still keep a +1/+1 counter on the Deathbringer.

Captured Sunlight netted Rasmus a Giltspire Avenger, and it wasn’t looking good for Shuhei Nakamura. When Sibast tried to use his Thoctar to kill the aforementioned Sewn-Eye, Nakamura fired back with a Drag Down. Sibast shrugged and played Bant Charm to counter the removal spell, then attacked with Dragonsoul Knight to put his opponent at 15. With the situation getting increasingly out of hand, Shuhei looked at his next card, then decided to concede the game to the overwhelmingly superior board position.

1 Sphinx of the Steel Wind
23 Cards