Pro Tour–Honolulu Round 8: Esper On Two 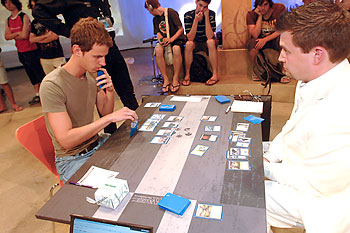 Sebastian Thaler and Brian Kibler: a study in opposites.Brian Kibler and Sebastian Thaler are both undefeated going into the last round of Day One here at Pro Tour–Honolulu. Only one of them will leave this round without a blemish on their record. Both players have impressive pedigrees. Thaler was the Pro Tour Rookie of the Year in 2007 and has Pro Tour Top 8s in both Constructed and Limited. Kibler has only one Pro Tour Top 8, but among his eight Grand Prix Top 8s are two outright wins.

Both Kibler and Thaler drafted Esper decks, but they are very different. Kibler’s deck is all three of Esper’s colors and has a powerful top end that includes two Glassdust Hulks and a Tower Gargoyle. Thaler’s is only blue and white and is extremely aggressive and low-slung. He has ten creatures that cost two mana and nine cards that have exalted, as well as three Kathari Screechers.

The difference between the two players was obvious. Kibler was still in his white suit and was still rocking out to “Smashing the Opponent” by Infected Mushroom on repeat. On the other hand, Thaler was wearing a T-shirt and shorts and chose not to bring any musical devices. Although both players were playing Esper decks, in every other aspect it was a battle of opposites.

Thaler came out of the gates with Ethercaste Knight and Kathari Screecher. A Sedraxis Alchemist from Kibler bounced the Screecher thanks to a Mistvein Borderpost, but it came back down next turn. Brian then tried to come over the top with a Tower Gargoyle that dwarfed the rest of the creatures on the board. Sebastian made an Ardent Plea, which eventually found an Ethersworn Canonist. The Knight and Plea combined allowed the Screecher to attack for 4, exactly enough that it could kill the Tower Gargoyle.

Kibler returned fire by attacking with the Tower Gargoyle and adding a Glassdust Hulk. The game was a race between evasion creatures, but whose would be faster? Thaler decided to change the equation a bit by using a Welkin Guide to sending the Canonist to the air and attack. This left the life totals at 14-6 in favor of Thaler. Kibler was going to need a big turn to stay in this game.

Kibler’s version of that big turn involved a Parasitic Strix that stole some life from his opponent and gave him an extra flyer and an attack with both Glassdust Hulk and Tower Gargoyle. The Welkin Guide chumped the Gargoyle, but at the end of the turn the life totals stood at 8 to 8. That was exactly the big turn that Kibler needed. 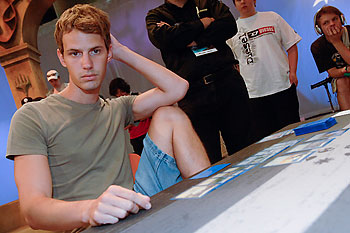 “I have three cards,” said Kibler. “They’re all very good.”

Thaler thought, tapped five mana, thought, then played a second Welkin Guide that once again sent the Canonist into the air. It attacked for 6 thanks to Ardent Plea and Ethercaste Knight. Kibler threw his Parasitic Strix in the way.

Kibler thought for a long time, manically flipping through the cards in his hand while staring at the board. He finally went with an Angelic Benediction and a Tower Gargoyle attack that tapped Thaler’s Screecher. This time it was Thaler’s turn to chump-block, and he threw the Welkin Guide into the Gargoyle’s hungry jaws.

Kibler was out of potential chump blockers, so Thaler cast an Aven Squire and sent in his Kathari Screecher for 5, taking Kibler to 3. Kibler frowned to himself as he played a Frontline Sage, then attacked with a very blockable Glassdust Hulk. The Angelic Benediction tapped one of Thaler’s blockers, but left an Ethercaste Knight untapped who was more than happy to die for the cause. Thaler’s return attack with a 4/4 Kathari Screecher forced Kibler to trade his Tower Gargoyle away.

Kibler was at 3, and the Kathari Screecher in Thaler’s graveyard threatened to kill him next turn. Kibler activated Frontline Sage, then attacked with a still-blockable Glassdust Hulk. Aven Squire chump-blocked, then Kibler played a second Sedraxis Alchemist that emptied Thaler’s board of creatures. Despite his confidence, he still had nothing to stop Thaler’s unearthed Kathari Screecher from doing the last three points of damage.

While shuffling for the second game, Kibler informed me that “Glassdust Hulk is much more exciting when I actually draw artifacts.” Good to know.

In the second game, it was Kibler’s turn to start off with an Ethercaste Knight on turn two. Thaler’s unconventional response was to not play a second land and instead discard Bant Battlemage. Kibler pressed his advantage with Esper Battlemage and Etherium Abomination while Thaler discarded two Kathari Screechers. By the time Thaler found a second land he had no chance of catching up.

Kibler looked confused while he shuffled for Game 3. Thaler took pity and offered an explanation: “I kept a one-land hand with six two-drops.”

“It seems like you could quickly get outclassed if all you had was two-drops. I guess sometimes you get there and sometimes you don’t. I wouldn’t argue against you doing it again.” 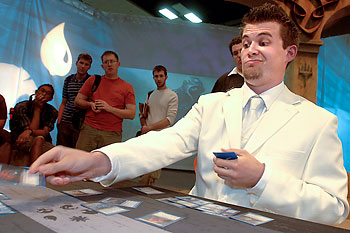 Kibler smells something fishy.Thaler mulliganed to start the third game, then led with Vedalken Outlander and Kathari Screecher. Kibler played a second turn Ethercaste Knight, then attacked it into his opponent’s two 2/2s and dared him to double block. Thaler took the bait, and Kibler killed the Screecher, then followed up with Esper Sourjourners. Thaler spent his next turn merely unearthing the Screecher and hitting for 2. Kibler shot back with the Sojourners, then played the Tower Gargoyle that had so dominated the first game.

Thaler’s next play was Stormcaller’s Boon. With that and a few creatures he could swat the Tower Gargoyle out of the sky, but he needed some creatures first. The Ethercaste Knight that he cascaded into promised to help. Thaler passed with no attacks.

Kibler pressed his advantage by attacking with Tower Gargoyle, then added Esper Battlemage and Parasitic Strix. This put Thaler so far on the back foot that he could not afford to attack after playing a Welkin Guide. When Kibler sent his Tower Gargoyle, Parasitic Strix, and Esper Sojourners in, Thaler gave up.

Kibler lamented after the match that he had built his deck wrong. He chose to play Frontline Sage and Angelic Benediction, where he should have played Scornful Æther-Lich and Etherium Abomination. This almost mattered in this match; he drew both of those cards in Game 1, and had his deck been built correctly, those two artifact creatures would have allowed him to win the race. Neither Frontline Sage nor Angelic Benediction are artifacts, so he did not win. Despite that error, Kibler will be entering the second day with an undefeated record.

1 Gleam of Resistance 1 Path to Exile