Pro Tour–Honolulu Round 9: "That's What You Get For Thinking!"

Welcome to Day Two of Pro Tour–Honolulu. Zac Hill and Brian Kibler were the only two players to earn undefeated records yesterday, and only one of them will remain undefeated after this round. Kibler was once known as the “Dragonmaster,” a title he earned by playing Rith, the Awakener to the Top 8 of Pro Tour–Chicago in 2000. Hill, however, is more of a master of dragons this weekend than Kibler. He managed to convince Nicol Bolas, Planeswalker to hang out in his Shards of Alara Block Constructed Five-Color Control deck, while Kibler played an Esper aggro deck.

This draft, Kibler and Hill have very different decks. Hill’s is a five color control deck that uses Armillary Spheres and other mana fixers to set up for powerful spells like Bull Cerodon, Conflux, Worldheart Phoenix, and Prince of Thralls. Kibler’s deck is a low-slung Jund deck with lots of haste creatures. He’ll need to use those creatures to win games before Hill’s bombs take over. 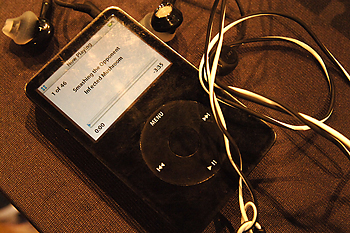 Kibler is still listening to the song “Smashing the Opponents” this morning. I was disappointed to discover last night that other than the title, the song itself had nothing to do with actually smashing opponents. Still, it seemed to be working. Would the song continue working its magic today?

Both Kibler and Hill enjoy talking, and they started a steady stream of banter before they had even finished resolving the coin flip.

Hill: “Can you turn the music down a little? I can hear it from here.”

Hill: “Just had to finish rocking out? I understand.”

Kibler: “Sometimes my song lasts too long for the space between the pairings and sitting down, and that’s always a problem.”

The two players continued to shuffle. 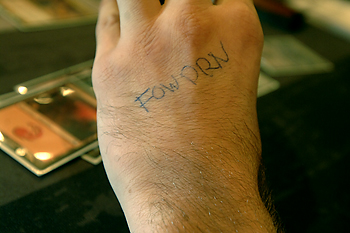 Kibler: “What’s that on your hand?”

Kibler: “What does it mean?”

Kibler had a song; Hill had an acronym. Which would prove more powerful?

Zac started out with a “Sphere” of the Armillary variety. Kibler responded with a “beater” in the form of Goblin Deathraiders. When Zac used the Sphere to fetch an Island and Mountain to go with his two Plains, Kibler recoiled.

Kibler: “I thought you took the Infest second!”

Hill: “That’s what you get for thinking.”

Zac used a cycled Jund Sojourners to kill the Goblin Deathraiders, and Kibler played a Canyon Minotaur to replace it. A Cumber Stone from Hill threatened to slow Kibler down, but Kibler came over the top with Giant Ambush Beetle and hit for 5. Hill’s attempted to defend with an Esper Cormorants. Kibler was unimpressed. He played an Igneous Pouncer and sent it in with the Beetle and Minotaur.

Kibler: “I have a theme deck.” 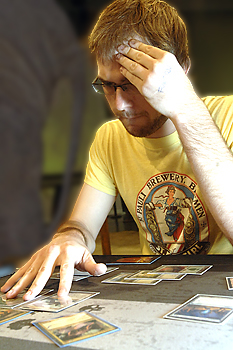 Zac Hill looks for a way out.Hill ate the Canyon Minotaur with his Cormorants thanks to the Cumber Stone, but took 7 damage. The next turn, he played Faerie Mechanist, which came up empty, and Stun Sniper. Kibler killed it with Wretched Banquet, then played a Sewn-Eye Drake and attacked with all three of his haste creatures. The Esper Cormorants found another meal in Sewn-Eye Drake and the Faerie Mechanist traded with Kibler’s Igneous Pouncer, but Hill fell to 2 life.

Hill felt safe enough behind his Esper Cormorants despite his opponent’s Giant Ambush Beetle that he chose to draw some cards with Covenant of Minds. It revealed Bull Cerodon, Path to Exile, and Obelisk of Jund.

Kibler: “You can have the next five.”

Unfortunately for Hill, Kibler had an Absorb Vis that made those five extra cards irrelevant.

Hill: “I thought I was getting Breath of Malfegored.”

There was a pause while each player pile-shuffled, then Kibler continued.

Kibler: “I hate first-picking Bull Cerodon now. I didn’t see it, so I know that’s what you took first. Every time I take him first my deck is terrible.”

Kibler: “He is one of those creatures that does not mess around.”

There was some more shuffling.

Kibler: “You would have liked my seat. In my first Conflux pack I passed Martial Coup.”

Hill: “It’s not a burn spell, but you could have just taken it anyway. Mana stability is overrated.”

Kibler: “I was happy spending my turns attacking you while you fixed your mana and then you died.”

Hill started the second game off with a mulligan.

Kibler: “I can’t say I’m sad. Pikula was right, you have to at least mentally pump the fist.”

His opponent nodded, then Kibler continued his discourse. “To be fair, sometimes you still get lucky. In Constructed, I double mulliganed playing first against a Jund deck and I killed him with two Esper Stormblades that he couldn’t remove. That deck has so much removal. A single Maelstrom Pulse and I would have been dead.”

The first action of the game was a second-turn Goblin Deathraiders from Kibler. Hill responded with an Obelisk of Jund to play a Wild Nacatl that was 3/3 thanks to a Plains and a Mountain, no Forest necessary. Kibler used a Wretched Banquet to kill it and a Dark Temper to kill the Faerie Mechanist that followed, allowing two attacks that took Hill down to 14 life.

Zac tapped three mana, then untapped it and thought another moment.

Kibler: “Three mana! I thought it was Zap.”

The same three lands tapped again, and a cycled Jund Sojourners killed the Goblin Deathraiders. Kibler replaced it with a Canyon Minotaur, then used a Jund Charm to power it through the Pale Recluse that Hill hoped to defend himself with. However, this left the 5/5 Canyon Minotaur as the smallest creature on the table, so a Wretched Banquet from Hill was able to remove it. The same turn, Hill played and popped an Armillary Sphere, getting the two basic land types he was missing.

Hill: “I wish I had Allied Strategies!”

Kibler: “That card was insane, but I preferred Collective Restraint.”

Hill: “I played that card two years ago.”

Kibler: “I played that card six years ago.” 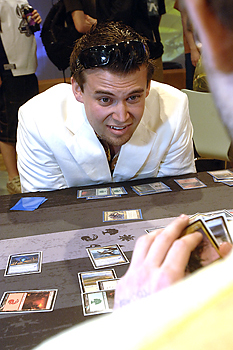 Brian Kibler gets a close look at Zac’s board.Hill placed Esper Cormorants into the empty board, which traded with a Sewn-Eye Drake from Kibler. Hill used the moment of calm to play a Cumber Stone, but Kibler broke it by playing Kresh the Bloodbraided and Canyon Minotaur, then attacking the next turn. A cycled Resounding Silence from Hill removed both of them. Kibler sheepishly played a Singe-Mind Ogre after combat, which revealed a Path to Exile. Hill added a second Cumber Stone, then used Offering to Asha on a Grixis Battlemage.

Kibler was going to need more than a single Singe-Mind Ogre to get past Hill’s two Cumber Stones and a Path to Exile in hand. Kibler’s first attempt was with Giant Ambush Beetle, which the Path promptly turned into a basic land. That Path to Exile was the last card in Hill’s hand. Would his draws be enough to put the game away?

First, a Kathari Remnant from Hill cascaded into a Putrid Leech. Next turn, the Putrid Leech hit for 2 and he played a freshly-drawn Skyclaw Thrash. The turn after that, a Bull Cerodon arrived. A Molten Frame took out the Thrash, but the Bull Cerodon would prove problematic. Kibler fell to 11 life and could only manage an Absorb Vis that made it 8 to 13. Hill’s squad pulled Kibler back down to 6 next turn.

The turn before he would die, Kibler played a Pestilent Kathari. Kibler gave the Kathari two +1/+1 counters with his second Jund Charm to get its damage past the Cumber Stone, which allowed it take out the Bull Cerodon. The solo Putrid Leech was still more than enough to kill Kibler two turns later.

Kibler: “I guess I should have played the Singe-Mind Ogre before attacking, then I might have known about the Resounding Silence. I also could have just not attacked with both of them.”

Hill: “I would have just let you 2 me every turn with Kresh, but you could have waited too.”

Kibler: “Yeah, I think I could have played that game differently and won.”

As Hill cut Kibler’s deck before Game 3, Kibler teased “I don’t know if you want those on top.” It turned out that Hill did want exactly those cards on top. Kibler did not play a creature on turn two, nor did he play a third land on turn three. This gave Hill the time to play and pop an Armillary Sphere, giving him access to all five colors of mana.

Kibler found a land on turn four and a played Grixis Battlemage. Hill’s Cumber Stone forced it to attack for only one. Kibler’s Igneous Pouncer found him another Swamp, but would not help him put pressure on Hill, whose Wretched Banquet killed the Grixis Battlemage. Kibler replaced it with a Canyon Minotaur. Hill once again used a Kathari Remnant to cascade into Putrid Leech. Kibler used his own Wretched Banquet to take out the Remnant before Hill could untap his Swamp.

Hill’s Covenant of Minds made a repeat appearance, revealing Bull Cerodon, Offering to Asha, and Rupture Spire. This time Kibler allowed Hill to have the revealed cards, then Hill added a Stun Sniper.

Kibler pondered his options, then attacked with his Canyon Minotaur. This was strange given that the Putrid Leech could become a 4/4. Did Kibler have a trick? Hill thought, announced “Call”, then blocked with the Leech and paid 2 life to pump it. Kibler used a Dark Temper to kill it in response.

The Bull Cerodon from the Covenant of minds finally came down on Hill’s side and hit for 5, taking Kibler to 15. Kibler frowned and threw his Canyon Minotaur at it using a Bone Splinters.

Hill surveyed the empty board, then attacked for one with his Stun Sniper. While this happened, Pro Tour photographer Craig Gibson took some pictures of Hill’s hand. 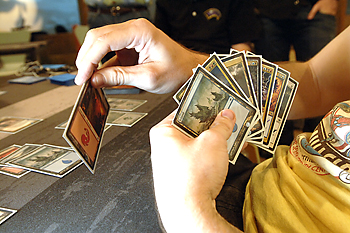 OK, maybe it was bad for Kibler after all.Kibler: “Taking pictures of his hand can’t bode well for me.”

Gibson: “I’m taking pictures of the back of his hand.”

Kibler’s relief was short-lived. A moment later, Hill played an enormous Prince of Thralls. Kibler fell to 5 on the following attack, then sat back even more in his chair when Hill added a Worldheart Phoenix to the table.

Kibler: “Well, this is awkward. I’m trying to figure out what outs I have, if any.”

Kibler: “I guess I have to Jund Charm. Two damage to everything. If I draw a Wretched Banquet, I can kill the Prince of Thralls, but I didn’t. You win.”

After the match, Kibler was disappointed with the second game, which he said he “didn’t play well on a number of levels.” Of course, he’s still in great position with only one loss in nine rounds. Meanwhile, Hill is now the only undefeated player in the room.