By Josh Bennett and Craig Gibson 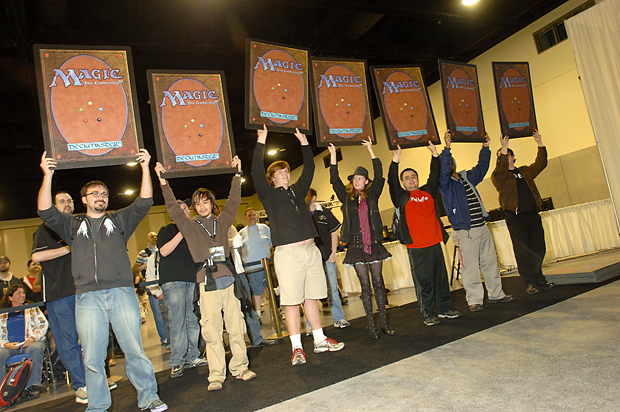 The crowning spectacle of Saturday at the Pro Tour was Massive Magic hosted by the good people from Robot Chicken. Magic R&D brought two decks of massively oversized cards and conscripted audience members to act as the spells and monsters battling for their amusement. Mark Gottlieb and Mike Turian were the captains of Team R&D, and here is their opening hand. 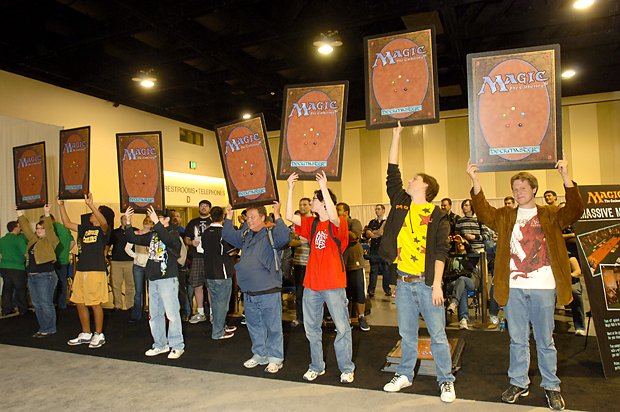 Team Robot Chicken was made up of comedy gurus (and Magic-playing fiends) Mike Fasolo, Clare Grant, and Hugh Sterbakov. Fans were eager to act as their personal stewards. 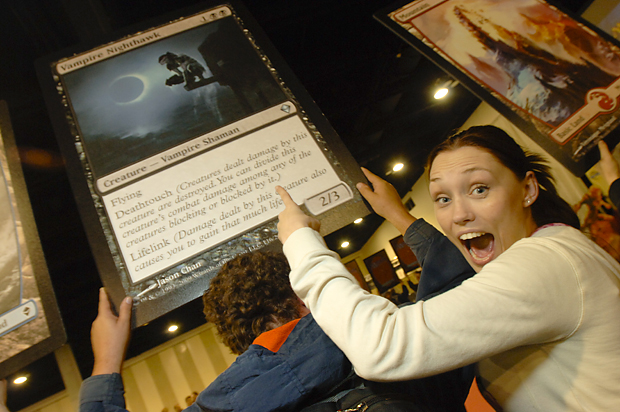 Team R&D were playing mono-green, and Team Robot Chicken were excited to find themselves playing a spicy Grixis-colored deck. Here we see Clare Grant losing it when her team’s opening hand featured this bomb. 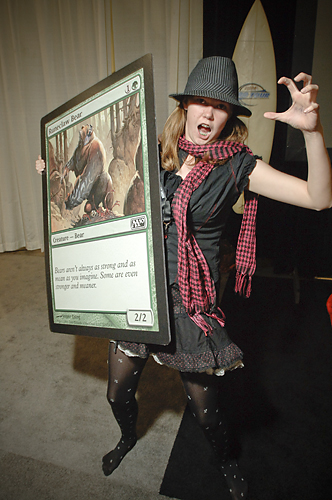 R&D was the first team on the board with a turn-two Runeclaw Bear. Doing her best to look scary is Astara Leech, who came to the Pro Tour on Saturday eager to play Two-Headed Giant but wound up in a Zendikar Sealed event. A relatively casual player, her favorite part of the weekend was playing against so many different cards. She made an excellent Bear. 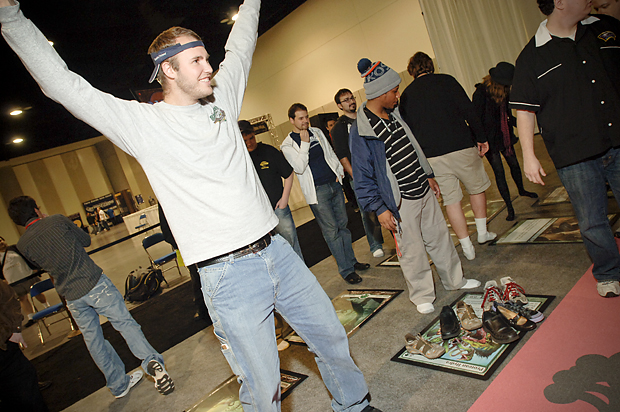 Big cards demand big tokens, and so Protean Hydra wound up wearing many different pairs. In the foreground we see a Beast token made by an off-camera Garruk. Mike Turian strides authoritatively nearby, surveying his team’s handiwork. 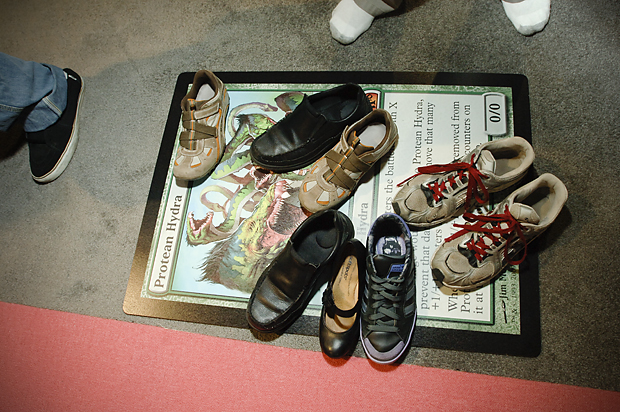 Yep, that’s an 8/8 Hydra alright. It was around here that Team Robot Chicken took a break to throw trivia at the audience. Winners took home awesome Robot Chicken merchandise, including an exclusive crew hoodie. 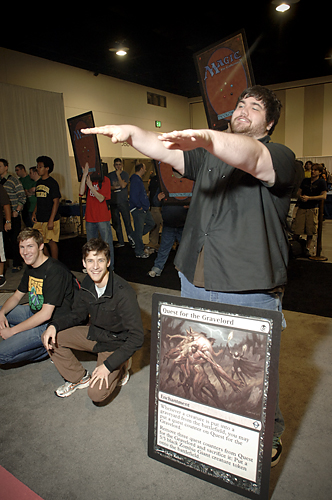 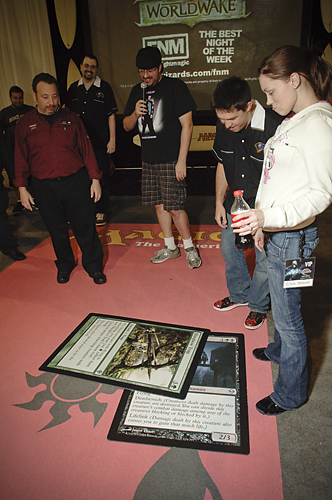 “OK, everyone ... on three. One ... Two ... Three—IT’S A TRAP!” R&D’s minions shouted in unison as they brought down an incoming Vampire Nighthawk. Team Robot Chicken refused to believe that Slingbow Trap was a real card. 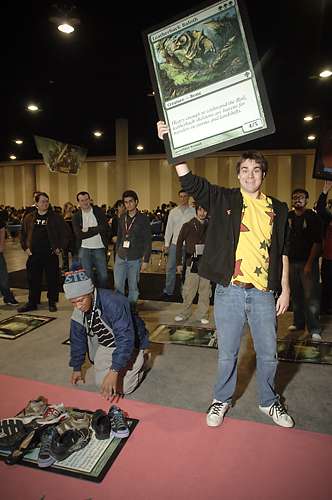 So happy to be a Leatherback Baloth is Hans Hauser, a California local. He sent a shoutout to his Friday Night Magic store “Thou Shalt Game” in Temecula. He came to the Pro Tour hoping to play a lot of Standard, and gamed his heart out. He said the best thing was playing against different decks with Bloodbraid Elf, because it was exciting to see what they’d flip up. 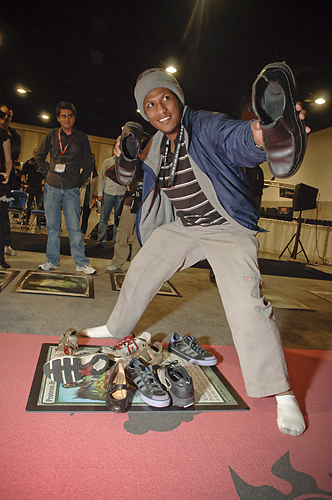 Here we see the Protean Hydra himself, Devon Everett, who’s been at the Pro Tour all weekend to play in Qualifying events. In addition to the nonstop gaming, his favorite part of the weekend was battling R&D at the Champion Challenge. 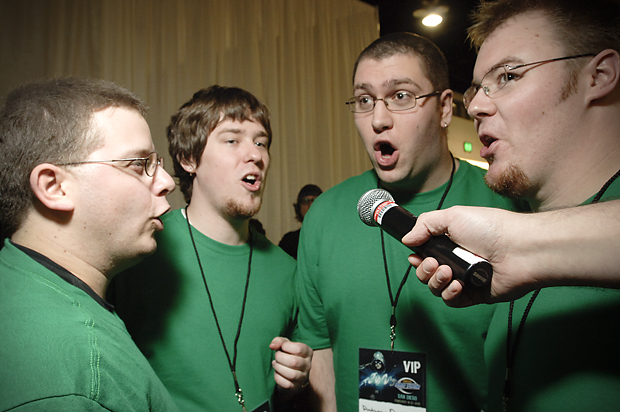 The massive Hydra had Team Robot Chicken with their backs against the wall. They needed something big to turn it around, and the barbershop quartet Thundercats were more than happy to announce their next spell in song form .... 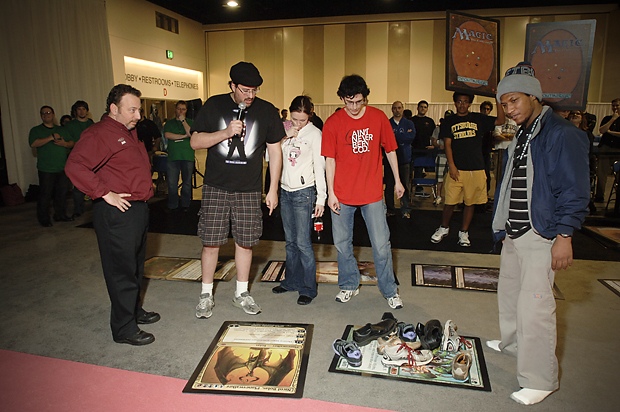 NICOL BOLAS, PLANESWALKER! Devon looks disappointed to be working for the other team. Sadly it wasn’t quite enough. R&D still had enough power on the board to swing in for the win, to the cheers of the crowd. 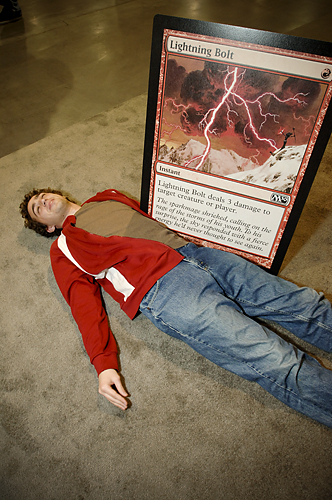 Afterwards the helpful volunteers enjoyed gifts of Robot Chicken swag and the crowd took the chance to pose with the giant cards. Here is one of the best.

Massive Magic is just one of the unique, unforgettable experiences available to anyone who shows up at the Pro Tour. How can you say no to a weekend that includes free cake, non-stop gaming and a barbershop quartet?