Jeroen Kanis, at 12-4, is definitely the underdog in this match-up. One of Kanis's losses came Round 10 at the hands of Scott-Vargas when they faced off with their draft decks.

Scott-Vargas got off to a strong start, casting Birds of Paradise, Noble Hierarch, Ranger of Eos, and two Wild Nacatls before Kanis got his second land. Kanis was able to burn the Birds right away, but was at 16 life when he played an Arid Mesa, then at 15 life when he cashed it in for his second Mountain. He started to stabilize with a landfallen Searing Blaze killing one of the Nacatls and bringing Scott-Vargas down to 16, which promptly became 15 when Scott-Vargas popped his own Arid Mesa. 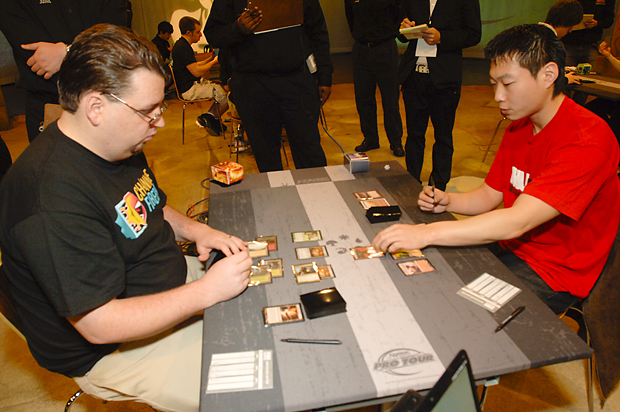 Scott-Vargas kept up the pressure with Elspeth, Knight-Errant. She kindly gave the remaining Wild Nacatl +3/+3 and flying, and the Nacatl attacked Kanis down to 6. Facing an apparently unstoppable army, Kanis conceded.

The sideboarding in a Pro Tour Top 8 is different from regular sideboarding. For one thing, both players know both deck lists, so they know exactly what could be coming out. Also, there's an entire night of testing behind them, so each player theoretically knows the best plan for foiling his opponent's plans.

A third difference is sometimes overlooked: The matches are three out of five, not two out of three. With each player required to win at least two games after the sideboarding, this means that the sideboarded version of the deck is more important than it is during the Swiss rounds.

Kanis chose to go first, hoping that his burn deck would explode out of the gates a little faster this time. His second-turn Plated Geopede fell victim to a classic Beta Lightning Bolt, and Scott-Vargas's Noble Hierarch promptly died to a Punishing Fire.

Both players had taken some damage from fetch lands when Kanis took out an opposing Cunning Sparkmage and sent a Ball Lightning over to take Scott-Vargas down to 11. Scott-Vargas didn't seem fazed and calmly put out a Basilisk Collar with no creature to which to attach it. Kanis pressed his advantage, casting Hell's Thunder and adding a Teetering Peaks to deal 6 damage. 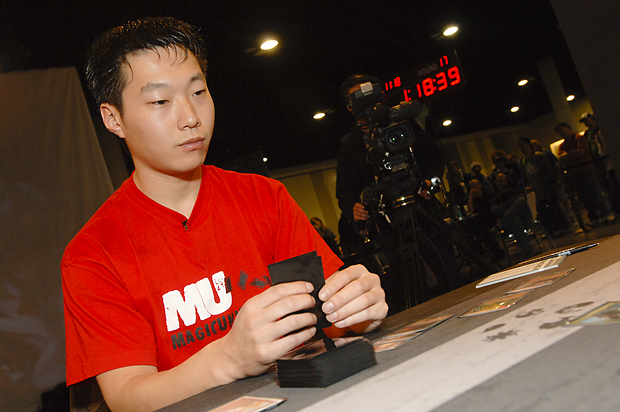 Kanis tries to turn things around.

Scott-Vargas thought a bit about his next play. After considering his options, he summoned a Knight of the Reliquary and passed the turn. Kanis flashed back Hell's Thunder and attacked.

At this point, Kanis's life total was 18, while Scott-Vargas stood at 1.

Scott-Vargas equipped the Basilisk Collar on the Knight of the Reliquary and attacked for 6, which was a 12-point life swing. He added a Wild Nacatl and a second Basilisk Collar to his board and ended his turn.

Kanis attacked with an unearthed Hellspark Elemental, but Scott-Vargas declined to block it, preferring to go down to 10 life for the moment. Kanis conceded, sending them to Game 3. "I knew the Knights were gonna be a problem," commented Kanis.

The first thing that Scott-Vargas did that stuck was a fourth-turn Ajani Vengeant, which moved three life points from Kanis's side of the table to Scott-Vargas's before absorbing a Burst Lightning. Then another Kanis Hellspark Elemental came over and pushed Scott-Vargas's life total to 8. 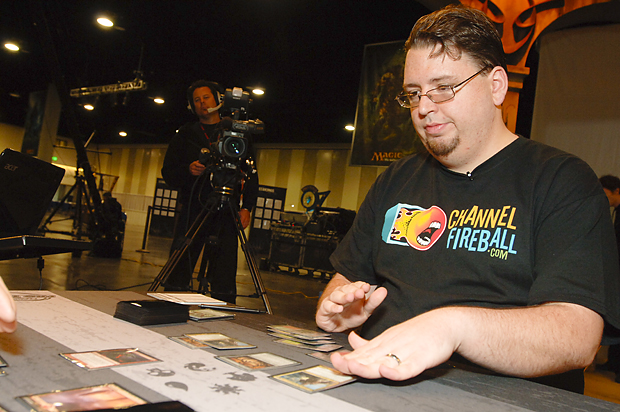 Thanks to his Basilisk Collars, Luis Scott-Vargas just will not die.

Scott-Vargas, as calm and unruffled as ever, cast a Stoneforge Mystic, getting a Behemoth Sledge for his hand, and added a Cunning Sparkmage. Kanis had an Earthquake for 3, but got pinged in response by the Sparkmage. The life totals were now 9-5 in favor of Kanis, who had been doing a great deal of fetch-landing. When Scott-Vargas used a Bloodbraid Elf to turn up a Lightning Bolt to Kanis's face, the life totals got even closer, with Kanis at 6 and Scott-Vargas at 5. Scott Vargas played an Arid Mesa, but did not sacrifice it.

Kanis unearthed a Hellspark Elemental, which traded with the Bloodbraid Elf and dealt one point of trample damage to Scott-Vargas. On his turn, Scott-Vargas played another Arid Mesa and a Knight of the Reliquary. Kanis threw a Punishing Fire at Scott-Vargas, putting him down to just two life.

When Kanis untapped, he promptly attacked with a freshly cast Hell's Thunder. Scott-Vargas had no choice but to pay 1 life to turn one of his Arid Mesas into a Plains so he could use Path to Exile on the elemental.

Once more, Scott-Vargas was down to 1 life while facing a dedicated burn deck. This time, though, his opponent had only 6 life himself. Scott-Vargas untapped, put a Basilisk Collar on his Knight of the Reliquary, and put the game away.

Luis Scott-Vargas defeats Jeroen Kanis 3-0 and advances to the Semifinals!