This Quarterfinal saw Pro Tour journeyman Craig Wescoe take on relative newcomer Daniel Gräfensteiner of Germany. While they shuffled they made only the most perfunctory small talk, mentally preparing for the challenge ahead. Wescoe was piloting a White Weenie deck the surprised the field this weekend, and Gräfensteiner was playing the modern version of the black-green-white deck called Junk.

Both players had their desired first turn: a Hierarch for Gräfensteiner and a Steppe Lynx for Wescoe. Gräfensteiner played a second Forest and Hierarch and hit for 2. Wescoe played a Plains and returned the favor, following up with White Knight. 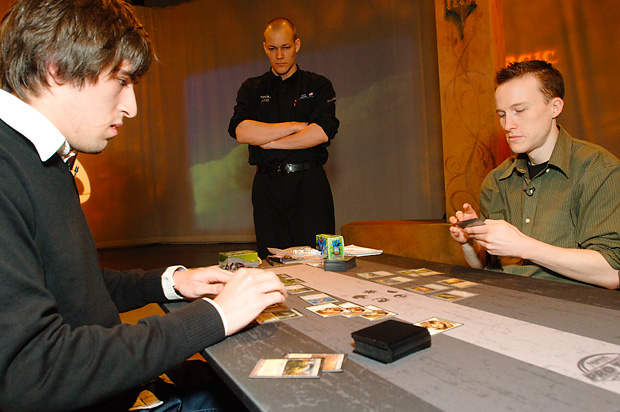 Daniel Gräfensteiner and Craig Wescoe get down to business in the Quarterfinals.

Fully accelerated, Gräfensteiner played Emeria Angel and then Marsh Flats for Plains, scoring two Birds. Wescoe prepared a counter-assault with Trusty Machete and Basilisk Collar, but Emeria the Sky Ruin as his third land kept him from equipping. Meanwhile, Gräfensteiner had some life gain of his own: Baneslayer Angel. He also scored a third Bird off Stirring Wildwood and swung in for 5.

Wescoe untapped hoping for a fourth land for the Day of Judgment in his hand, but his deck was not kind. He reconsidered his options. He settled on Kor Skyfisher and putting the Collar on it, holding back his forces. Gräfensteiner untapped, played a Verdant Catacombs, and then turned on his Stirring Wildwood and swung in with it, three birds, and both Angels.

Wescoe blocked the Wildwood with his Skyfisher, killing it and taking 11 from the fliers. Lifelink put him back up to 4. He slid the top card off his deck.... Not a Plains. 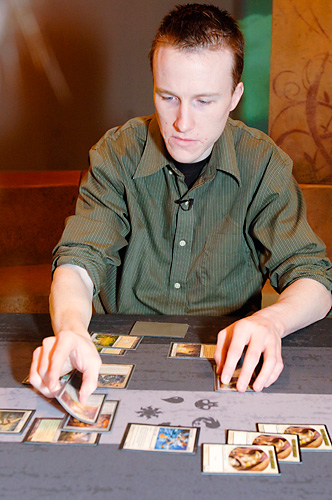 Craig Wescoe keeps the pressure on.Both players mirrored their Game 1 openings, but a second-turn Arid Mesa let Wescoe hit for 4 with his Steppe Lynx. His two mana bought him a Luminarch Ascension. Gräfensteiner fetched a Forest and tapped 3 for Knight of the Reliquary. Wescoe put the Ascension to one and untapped. Skyfisher recursed a Plains for Path to Exile on the Knight, giving Gräfensteiner a Plains.

Gräfensteiner needed a minute to think. He kept the Ascension in check with an attack from the Heirarch, then freed his Baneslayer with Maelstrom Pulse. Wescoe played a Dread Statuary and waited on his Luminarch Ascension. Baneslayer swung in, and Kor Skyfisher took one for the team. Gräfensteiner gained 6 and cast Emeria Angel.

Now the Ascension was running. Wescoe got two Angels at end of turn, untapped and hit with one of them. He waited on his Angel mana. Gräfensteiner gamely swung in with Baneslayer, who was ambushed by three Angels and a Skyfisher. Gräfensteiner killed the Skyfisher and passed back to Wescoe.

Wescoe swung for 12. Gräfensteiner took out an Angel with Path to Exile, but he was down to just 3 life. He untapped, drew, and scooped up his cards.

On the play, Gräfensteiner rejected his opening seven. Wescoe stood pat. He played Plains and passed to Wescoe, who again had a Steppe Lynx. Gräfensteiner played a Verdant Catacombs and held off using it, needing to draw more lands. Wescoe hit for 4 thanks to Arid Mesa and cast White Knight.

Gräfensteiner played Marsh Flats and still refused to sacrifice. Wescoe played Dread Statuary, and equipped his Lynx with Trusty Machete and swung in. Path to Exile got rid of the White Knight but kept the incoming damage at 6. Gräfensteiner drew a fourth land and fetched twice for Maelstrom Pulse on the Lynx, down to just 8 life.

Wescoe played a second Dread Statuary and swung with the first, putting Gräfensteiner to 4. Gräfensteiner’s only play was a Noble Hierarch, which bravely stood in front of the charging Statuary. Wescoe passed it back.

Gräfensteiner had no play on his turn, but a Path to Exile for the Statuary. Wescoe added White Knight to the table. That was more than Gräfensteiner could handle, and they were on to Game 4.

The match was put on hold in order to get it on camera. The spotter asked how Game 3 had ended.

“With the best man-land in Worldwake,” replied Wescoe.

Again Gräfensteiner had to mulligan, but this time he had the Noble Hierarch and Wescoe had no Steppe Lynx. Three mana gave him Borderland Ranger, undoing some of the pain of the mulligan. Wescoe simply played another Plains and passed. 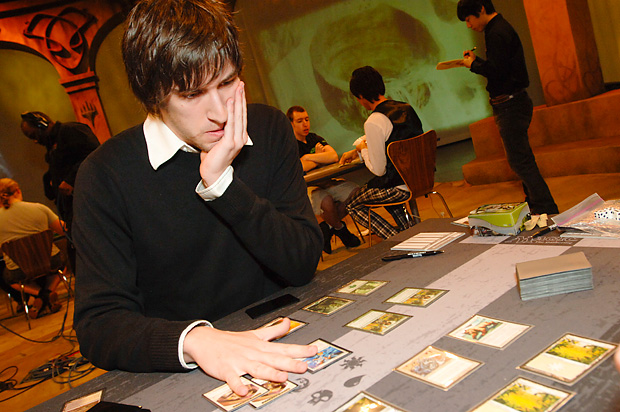 Gräfensteiner looks for a way out.

Gräfensteiner made a second Hierarch and swung in for 4 with Borderland Ranger. Wescoe’s third land was Marsh Flats and he held off cracking it. The Ranger hit again, bringing Wescoe to 12. Gräfensteiner waited on his six mana. Wescoe played an Arid Mesa and traded his fetches for Plains, then tapped four for Day of Judgment, setting Gräfensteiner back to just four land.

Elspeth, Knight-Errant came down for Gräfensteiner and gave him a Soldier. He had two cards in hand. Wescoe attacked him for 4 and put Elspeth in an Oblivion Ring, but Gräfensteiner freed her with Maelstrom Pulse. The Soldier went to the air for 4 damage, leaving Wescoe at 6.

This time Wescoe aimed his creatures at Elspeth. Gräfensteiner turned on his Stirring Wildwood, but Wescoe shut it down with Path to Exile. Elspeth fell to one loyalty counter. Wescoe picked up his tapped Skyfisher with another, then replayed it. Gräfensteiner fought back with a Maelstrom Pulse, taking out both of them. Elspeth gave him a second Soldier, and he swung in for 1.

Wescoe wasn’t out of gas yet. Oblivion Ring exiled the untapped token, White Knight killed Elspeth, and then, the cherry on top: a Kor Skyfisher to get back his Oblivion Ring. The crowd across the hall cheered.

Wescoe untapped, thought for a moment, then turned on his Dread Statuary and attacked with all his creatures. The Hierarch blocked the Statuary, leaving Gräfensteiner at 6. Gräfensteiner drew, and swung in for a lethal 3. Wescoe naturally had the Path to Exile, but Gräfensteiner had pulled a Maelstrom Pulse for Wescoe’s Oblivion Ring!

With his Baneslayer Angel free, he was back in the driver’s seat, and Wescoe had no play. Gräfensteiner swung in, and Wescoe chumped with Kor Skyfisher. Things got worse with an Emeria Angel for Gräfensteiner.

Wescoe drew, and a laugh came up from the crowd watching the live stream.

“I think those laughs are for what I drew,” said Wescoe. “Better lucky than good, I guess.”

He tapped four mana and showed the Day of Judgment.

Wescoe drew and permitted himself a small smile. Oblivion Ring took out the Knight, giving Wescoe the match.

Craig Wescoe defeats Daniel Gräfensteiner 3-1 and advances to the Semifinals!