Boggemes got on the board first with a Sprouting Thrinax off of a pair of Savage Lands. A Blightning from Ikawa stole a Broodmate Dragon, a Lightning Bolt, and a few life before Boggemes had a chance to add a second Thrinax to the board. Not wanting to get too far behind, Ikawa was fortunate enough to have his Bloodbraid Elf cascade into a Thrinax of his own. The board cleared on the following turn, though Boggemes was left with three more Saprolings than Ikawa. He added a pair of Putrid Leeches to his team and sent the turn to Ikawa with a single card left in his hand. 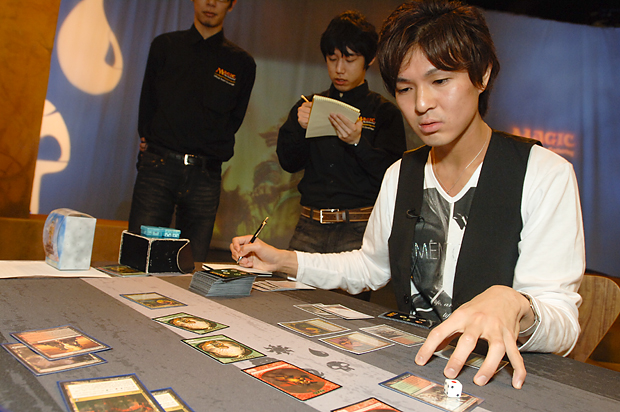 The dapper Yoshihiko Ikawa of Japan does the math.

Ikawa was a bit behind on the board, but he had a few more cards in his hand than the American. A new Bloodbraid Elf once again cascaded into the same creature as Boggemes, landing Ikawa a Putrid Leech. Boggemes attacked with all eight of his creatures on his turn, and the fray resulted in four dead Saprolings and an ex-Putrid Leech for Boggemes, and the loss of all of Ikawa's Saprolings and his own Putrid Leech. Apparently, Boggemes didn't feel comfortable without a gang of creatures in front of him, so he snagged a Siege-Gang Commander to provide him with just that. Ikawa sighed a bit as the creatures hit the board, but he immediately dispatched the Commander with a Terminate before it could do any more damage. After adding a Putrid Leech to his team, he passed the turn.

Considering his immense creature advantage, Boggemes unsurprisingly animated his raging Ravine and attacked with his whole team. He was forced to chump block with his Leech and Bloodbraid Elf, putting him just a turn or two away from death. He managed to find a Siege-Gang Commander to even up the board a touch, but the Raging Ravine and friends were able to just swarm over, around, and through a turn later, giving Boggemes the early advantage in the match.

Both players took their time sideboarding between games. Ikawa hesitated a few times about his sideboarding choices, sometimes reaching back into his deck to check his decisions. Once satisfied that he had chosen the right 60 cards, Ikawa presented his deck and chose to go first. While he kept his opening draw, Boggemes was less pleased with his and mulliganned into an acceptable six.

Both players started in the usual fashion, with most of their lands entering the battlefield tapped. A Pair of Verdant Catacombs from Ikawa dropped him to 18, but also allowed a third-turn Sprouting Thrinax. Boggemes had a Catacombs of his own to match Ikawa's Thrinax.

Ikawa began to assault Boggemes's fragile mana on the next turn, aiming a kicked Goblin Ruinblaster at Boggemes's only black-producing land. That forced Boggemes to use a Verdant Catacombs on the following turn to fetch a Swamp, once again giving him access to the color. This allowed him to Blightning two Mountains out of Ikawa's hand. Ikawa struck back at Boggemes's hand with a Mind Rot, netting a far superior Lightning Bolt and Siege-Gang Commander. This left both players at two cards in hand.

Boggemes was the first to recoup the card disadvantage with a Bloodbraid Elf into a Sprouting Thrinax. Two Thrinaxes traded during combat and were replaced with a swarm of Saprolings. Ikawa used a Bituminous Blast to finish off the other Thrinax on his turn, but it left him without the mana to kick the Ruinblaster he flipped over. Saprolings traded, and Ikawa dropped to fifteen. Boggemes had a back-breaking third copy of Sprouting Thrinax, which Ikawa killed via Bituminous Blast on the following attack. He cascaded into a Lightning Bolt, which went straight to the Bloodbraid Elf, leaving Boggemes with just Saprolings.

Boggemes drew and cast a Bloodbraid Elf, eliciting a wince from Ikawa. The hasty Elf cascaded into a Great Sable Stag, fluffing Boggemes's board even more. All Ikawa could do was play a Sprouting Thrinax and hope for the best. Boggemes attacked with just his Saprolings and Great Sable Stag, hoping to just begin to swarm around for as much damage as he could with his disposable troops. Ikawa traded his last Ruinblaster for one token and killed another with his Thrinax. This left Boggemes with a trio more, as well as his Stag and Elf. All Ikawa had was a single Thrinax to his name. He untapped and aimed a third Goblin Ruinblaster at Boggemes's last nonbasic land, but had to simply pass the turn on 7 life. At the end of his turn, Boggemes dropped him to 4 with a Lightning Bolt. 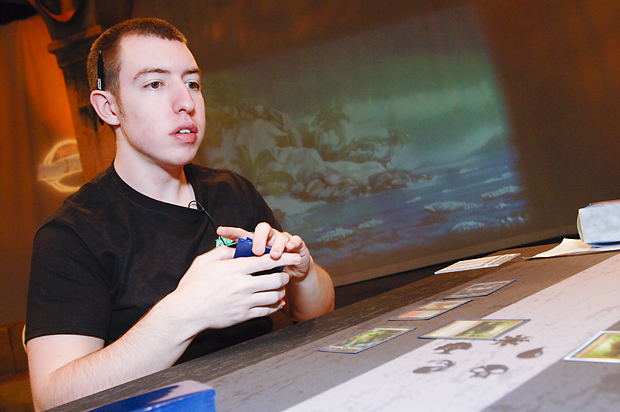 An all-out attack dropped Ikawa to one. He managed to reduce Boggemes's army to just tokens, but Boggemes added a Putrid Leech after combat. Ikawa drew his card and passed the turn. Boggemes kicked a Goblin Ruinblaster at Ikawa's Raging Ravine and attacked with his whole team. Ikawa didn't have the Bituminous Blast that he needed to have even a chance at surviving the turn, and they went to Game 3.

Ikawa's back was truly against the wall here. The stream of Sprouting Thrinaxes that had flowed out of Boggemes's deck in the last game allowed him to overcome a pretty sizable card disadvantage. Ikawa had a few Goblin Ruinblasters, which are usually phenomenal against Jund, but Boggemes had the lands he needed to get around the disadvantage.

Before this game started up, Boggemes realized that LSV had finished his match at the neighboring table. After finding out that he won, both players heaved a sigh of relief. Only these guys could find relief that the guy who was 17-0 at this tournament was a potential future opponent.

"I didn't want to have to play a burn deck," Boggemes admitted with a smile.

When he asked Ikawa if he had played LSV in the Swiss, Ikawa laughed and said, "No. I was very lucky."

His luck appeared to have caught back up to him for the third game, as he was the first to find a Sprouting Thrinax, as well as having a Ruinblaster to off Boggemes's Savage Lands. This game, rather than Thrinaxes, Boggemes's deck seemed content to provide him a plethora of Great Sable Stags, as a pair of them came down to combat the creatures of Ikawa. Ikawa added to his swarm of creatures with a Siege-Gang Commander. When Boggemes attacked in with both of his Stags on the following turn, Ikawa thought for a few minutes before eventually deciding to trade one of his tokens and the Ruinblaster for one of the Stags. This dropped him to 12.

Unfortunately for Ikawa, he never got to activate his Siege-Gang Commander, as it was fricasseed by a Lightning Bolt on the following turn. To add insult to injury, he managed to find a Thrinax to match Ikawa's. Ikawa was able to score a victory when he emptied Boggemes's hand on the following turn with a Blightning, but Boggemes just gripped and ripped a Bloodbraid Elf that cascaded into a Ruinblaster of his own. He had an absolute swarm of creatures at this point, and sent his whole team in at Ikawa. The Japanese player blocked very carefully, ensuring that the Bloodbraid Elf would give him some tokens to take care of the Stag, as well as using his last token to kill the Ruinblaster. This dropped him to 4. 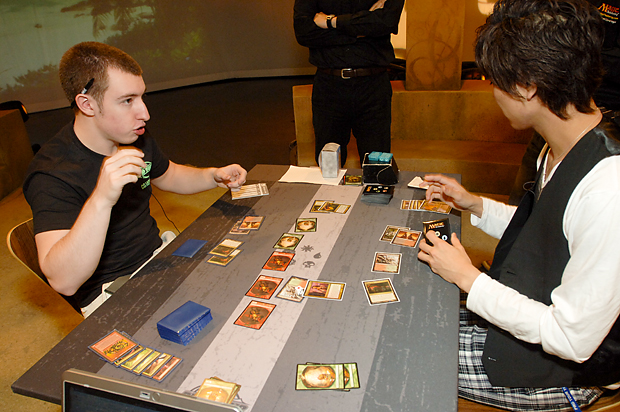 He had no play on his following turn, and Boggemes returned the favor from earlier, Mind Rotting away Ikawa's hand. His attack forced Ikawa to animate his ravine and trade it for the Stag, as well as chump block the Thrinax with a token. The following turn saw his Savage Lands fall to a Ruinblaster that, in turn, fell to a Token. Ikawa was able to clear away Boggemes' Siege-Gang Commander before he could get a fifth land to play it, but he was down to his last token. He had to chump-block the Thrinax on the following turn to stay at 4 life. Unfortunately for Ikawa, Boggemes had finally found a fifth land to activate his Raging Ravine. The silver lining for the Japanese player was that it was a Savage Lands, so the attack would have to wait another turn.

Ikawa took a deep breath and then drew his card. In a flurry, he excitedly flipped a Broodmate Dragon onto the table, inducing a roll of the eyes from Boggemes. The next turn brought another Thrinax from Boggemes and nothing for Ikawa. After having both of his Broodmates block the Thrinaxes, Ikawa was staring down a swarm of lethal creatures, one turn away from defeat. His draw didn't provide him with anything of value, and Boggemes's next attack finished things off.

Kyle Boggemes defeats Yoshihiko Ikawa 3-0 and advances to the Semifinals!