You know what's funny?" Simon Görtzen asked his opponent as they prepared to begin their first match of Top 8 play.

"Luis Scott-Vargas is the only player today who has ever lost in the Top 8!" Both players laughed at the thought. Luis had become the first player in the history of the Pro Tour to go 16-0 in competition over the course of the main event, defeating the previous record holder Ryan Fuller's 14-0 run. 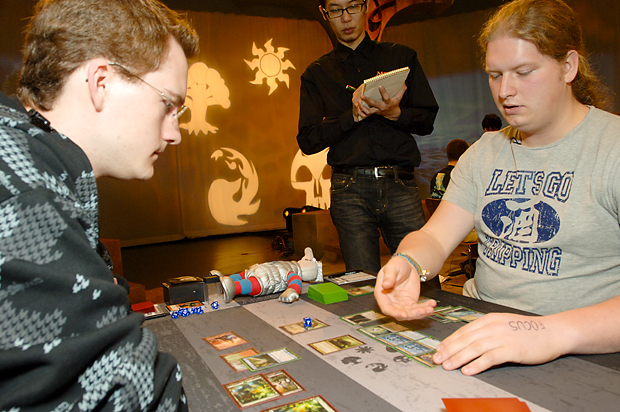 Simon Görtzen leans in to check out Niels Viaene's board, with the Belgians' good-luck doll nearby.

The two European players knew one another before the event and their destiny match in the Quarterfinals. After all, Aachen, Germany, Simon's hometown, is located just over the border from his opponent Niels's in Belgium.

Viaene won the die roll and got to play first. His Esper Control deck, featuring Open the Vaults as a combination win condition / card advantage engine / super life-gain spell, was heavily favored in the match-up against Görtzen's Jund deck.

One way Simon could win, however, was an aggressive early start with Putrid Leech followed by mana troubles from his opponent. Fortunately for the German, that's exactly how the first game of the match proceeded to get underway! He opened on the Leech, while Viaene missed his third land drop two turns in a row despite using a Courier's Capsule to draw two cards. Hoping to pad his life total, Niels had Journey to Nowhere to knock out the 2/2, but he lost his removal spell to a Maelstrom Pulse flipped up by a Bloodbraid Elf from Görtzen. The Belgian needed to find mana, and he needed it fast.

An attack from the Elf/Leech team took Niels to 6, and post-combat his opponent had a Raging Ravine and a second Leech. Even if Niels had a fourth mana and Day of Judgment, his opponent's creature-lands promised to end things for the Belgian in short order anyway. Viaene drew his card for the turn, solemnly surveyed the field, and conceded.

"You won all your matches against Jund?" Simon asked his opponent while they sideboarded between games.

"No," Niels replied before adding with a smile. "I tend to lose the games where I don't draw my lands!"

The second game of the match saw Simon Görtzen attempt to be as aggressive as possible, throwing a Lightning Bolt at his opponent's face on the very first turn. That was a smart move as Niels didn't really have any creatures that were good targets for the spell, but he did have plenty of cantrips to make sure he could find the lands he needed to power his deck's engine. Two Glassdust Hulk cycles and a Spreading Seas nullifying Raging Ravine all contributed to keeping Viaene's hand stocked full of goodies. Görtzen had a second Lightning Bolt to keep the burn façade up, but no early creatures.

Still, a Blightning for a third Bolt effect as well as two cards from Niels's hand dropped the Belgian to 11 life. Viaene discarded two nonartifact cards, a sign his hand was missing the Filigree Angels he would have been happy to bin for future use with Open the Vaults. Sprouting Thrinax, the first creature of the match, was preemptively halted with a Flashfreeze from Niels. 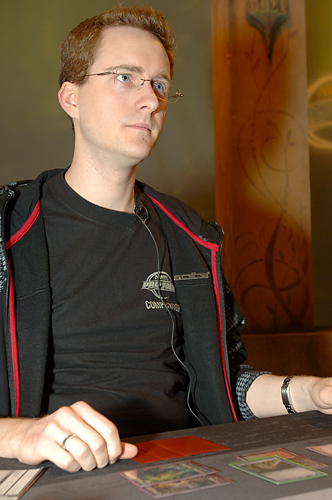 Görtzen tried for a Garruk Wildspeaker on his following turn, and managed to resolve the spell. The planeswalker allowed him to untap two lands, which enabled him to cast Great Sable Stag. At the end of the turn, Simon had only one card, but a presence on the table that could allow him to put some pressure on his opponent. Niels used Day of Judgment to take out the Stag, but had no immediate answer for the Garruk.

Simon tried for a Blightning, but Niels was ready with Hindering Light. Having only one card left in hand, Görtzen used his Garruk to untap some lands and cast Sprouting Thrinax. His opponent cycled Architects of Will and cast his first Open the Vaults of the match. He returned: two Glassdust Hulk, Architects of Will, and Journey to Nowhere.

The Journey took out Sprouting Thrinax, and the Architects of Will rearranged Simon's library. He found himself a Mountain waiting on the top of his deck, and could only use Garruk to make a Beast. The planeswalker finally met his end the following turn as Niels cast a Fieldmist Borderpost to make his Hulks unblockable and 4/5, then sent one at the Garruk and one to drop Simon to 14.

Görtzen found a second land waiting for him on the top of his deck, while his opponent had Filigree Angel to put him up to 28 life and all but seal the game. He attacked Görtzen to 6, and was able to attack for the win a turn later even though Simon had Maelstrom Pulse for his opponent's Glassdust Hulks.

In the background of the Pro Tour arena, Luis Scott-Vargas moved to an incredible 17-0 on the weekend with a win over his Quarterfinals opponent. "Unreal," said Simon, and Niels smiled in agreement.

"I didn't think LSV would go 3-0 in the Quarterfinals," Niels said. "I guess he is the demigod of Magic right now."

The third game of the match started out a bit slowly for Simon Görtzen's Jund deck, which opened on two enters-the-battlefield-tapped lands and no threats. On the third turn he had yet another ETB tapped land, but did find the mana to cast Putrid Leech. The 2/2 was quickly munched by a Journey to Nowhere from Niels Viaene. Görtzen's follow-up was a Sprouting Thrinax a turn later, with the 3/3 successfully resolving.

Viaene had had no problem coming up with black and white mana for the third game of the match, but headed to turn four, he was still missing blue. That was a bit awkward, considering the color was the focal point of his deck, and he missed his fourth land drop entirely. He did have Oblivion Ring to contain the Thrinax, but his opponent's Bloodbraid Elf made a mini-army by flipping up a Great Sable Stag. The Elf charged in thanks to haste and dropped Niels to 18.

Another turn for the Belgian Niels Viaene, and another missed land drop. It was the second game in the match in which he was missing critical lands, a hole in his armor that might cost him an otherwise favorable matchup. Simon activated a Raging Ravine and dropped Niels to 8 with a monstrous attack, but he finally managed to find a fourth land in Island to cast Day of Judgment. With a Ravine incrementing up each turn, however, he was far from out of the woods.

Rather than activate the land to attack his opponent, Simon cast a Siege-Gang Commander with enough mana left over to shoot Niels for 2 should he have a removal spell. Viaene did indeed, plopping a second Day of Judgment to the table and falling to 6 from doing so as his opponent sacrificed a Goblin for a Shock. That became 1 with an attack from the 4/4 Raging Ravine (which became 5/5), and Niels was down to his last turn if he didn't have a miracle. Spreading Seas stopped the Ravine, but he was still facing two other creature lands and with only two mana, the players were on to the fourth game.

"That's what it pretty much came down to in testing," Niels Viaene explained to his opponent as they were shuffling up for the fourth game of the day. "I win if I get lands." Viaene had defeated most comers in Standard, but Simon Görtzen's Jund deck, despite being a good matchup, was putting up quite a fight. The talented German player's style wasn't as quiet as his countryman and fellow Top 8 alumni Jan Ruess, but his play was just as skilled.

This game had a more frenetic pace than the previous three, as Simon Görtzen cast turn-two Putrid Leech only to see it countered by Flashfreeze from his opponent. His Sprouting Thrinax hit the table just fine, but was exiled by a Journey to Nowhere. Görtzen used a Maelstrom Pulse to take out his opponent's Fieldmist Borderpost, playing land destruction in a match where light mana draws had already earned him his two game wins. Viaene remembers to FOCUS, but his mana seems to have missed the memo.

Unfortunately for Belgium, Niels Viaene was again short on mana for the third time in the match. He had not only missed two land drops following the Pulse, but had lost his only source of white mana to the sorcery from his opponent. He had just two Islands on the table, and if the Belgian was to stay alive in the wake of his poor draws, he would need a lot of help. Unable to counter because of his mana situation, Niels could only watch as Simon cast a Garruk Wildspeaker, then used a second Maelstrom Pulse to get rid of the Journey to Nowhere on his Sprouting Thrinax. It was beginning to look like Görtzen was going to advance to the Semifinals on the back of mana troubles from Niels Viaene.

Raging Ravine and Thrinax moved to the red zone to put Niels to 13, but Viaene got a small bright note as he topdecked a Plains to cast Journey to Nowhere on the Thirnax to help keep afloat. He would need a second Plains, a Day of Judgment to wipe his opponent's team, and a miracle to survive the post-Wrath of God creature lands, but Viaene was still in it for the moment. Görtzen knocked Niels to 5 with an attack.

Niels Viaene's tournament life was on the line with one draw left to save him. When it wasn't there, he extended his hand.

"Good luck," he said to Simon.

Simon Görtzen defeats Niels Viaene 3-1 and advances to the Semifinals!