Pro Tour–San Diego Round 1: Let's Do the Time Warp Again

ro Tour–San Diego kicked off with a bang in the feature match arena as two hall of famers sat down to do battle: American Zvi Mowshowitz and French player Olivier Ruel. Zvi—wearing a cheeky shirt that read "Question authority ... Ask me anything"—recently released a book about Magic called My Files, Part I. Olivier, whose brother Antoine became a member of the Pro Tour Hall of Fame in 2009, one year after Olivier, was late to the table but made it in time to avoid any game penalties. The two players, long-time opponents on tour, quickly fell back into the pace of competing, joking with one another and discussing the game.

Olivier won the die roll but had to take an opening mulligan. His opponent was close behind him. "In the old days, people were silly enough to keep that hand," Mowshowitz muttered with his one-of-a-kind shuffle of a laugh. Kicking the game off with Ponder, Olivier opted to keep the top three cards of his library where they were, picking up the top one for his hand. His American opponent worked on accelerating his mana, casting back-to-back Birds of Paradise. 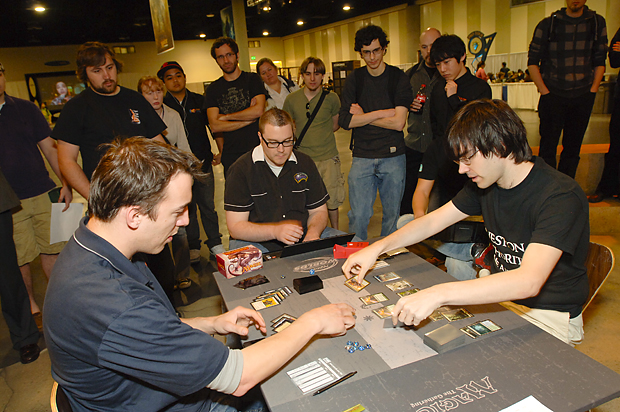 Hall of Famers Olivier Ruel and Zvi Mowshowitz draw a crowd in the arena.

Jace Beleren hit the table for Olivier—the original, not the fancy new version from Worldwake. The planeswalker netted both players a card, while Zvi dropped a Baneslayer Angel onto the battlefield. The 5/5 was soon rumbling to the red zone aimed at Jace, who was up to enough loyalty counters that he could absorb one hit. Unfortunately for the planeswalker, the Angel was monstrously pumped by a Rafiq of the Many, easily taking care of Jace and netting Zvi a whopping 12 life.

A second Jace was waiting in the wings for Olivier, but the Frenchman was stuck on three mana. Zvi took that planeswalker out with his Baneslayer while sending Rafiq at Olivier himself. Angelsong cycled to find Olivier the fourth land he needed, and a turn later at 7 life he was able to cast Day of Judgment to keep playing. Zvi recouped with Rampaging Baloths and a Verdant Catacombs, creating a gigantic army of fatties.

The battle of rarely-seen-in-the-Feature-Match-area cards continued as Olivier cast Quest for Ancient Secrets. He used Safe Passage on his opponent's upkeep to stay alive, but Zvi didn't seem to care. Instead, he simply played another land and made another fatty token. Ruel went to the top of his deck, then gave a sigh. Apparently out of Fog effects and board-sweepers, he was dead on the table.

"I guess I should have had you play first ...." he grumbled lightly while reaching for his sideboard.

Olivier Ruel had seen a lot of extra cards in the first game, but he hadn't been able to keep the lands that he needed flowing to the table. He tried to put an end to that in the second game by casting a second-turn Howling Mine. "We draw extra cards ...." Ruel muttered before Zvi waved him off. In a career nearly as long-running as the game itself, Mowshowitz has seen a Howling Mine or two.

Zvi worked on accelerating his mana with Birds of Paradise and Noble Hierarch, using the extra mana to cast Finest Hour. Fieldmist Borderpost for Ruel allowed him to accelerate a bit on his own, and he used Ponder to dig further into his deck. Not liking what he saw from the three cards, he threw them back to draw a random card from the top of his deck. He clearly missed, frustratedly slamming his hand on the table and passing without hitting his land drop. Could the Hall of Famer's deck be short on lands? In back-to-back games he had drawn numerous extra cards, while still failing to hit the lands he needed.

Lotus Cobra then made its debut in the San Diego feature match arena, quickly paying for itself with the help of a fetch land. That bought Zvi the mana he needed to cast Bant Charm targeting his opponent's Howling Mine. Valuing the artifact too highly to see it destroyed, Olivier countered with Negate. Mowshowitz simply fired right back with a Negate of his own, then attacked for 6 with Noble Hierarch thanks to Finest Hour and exalted triggers. 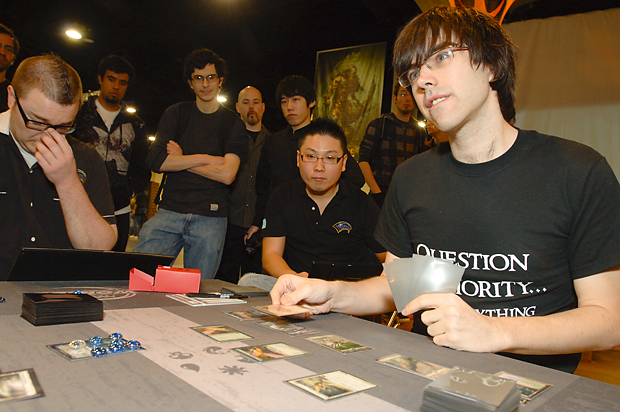 Mowshowitz finds himself on the wrong end of chaining Time Warps.

A second Howling Mine replaced the one that had been Charmed, then a turn later used Time Warp to take an extra turn and gain extra value out of his drawing artifact. On that turn he found a land, cast Jace, and had enough left over to try Safe Passage on Zvi's upkeep. The instant resolved, and Olivier was alive for another turn.

Font of Mythos ensured both players were drawing a hefty grip of new cards each turn, and Ruel managed to stick a second Safe Passage to remain alive. If the French super-pro didn't have a Fog each turn for the rest of the game, he was dead to whatever Zvi had on the table, including actual creatures and/or a duo of Celestial Colonnades.

Ruel did have the Fogs, using a second Passage to stay alive, then using a second when Zvi countered with Negate. Because of his years on the Pro Tour, Olivier knew how to use a Fog effect. Rather than let his opponent draw a mitt full of new cards each turn when he knew he had to cast Safe Passage that turn anyway, Olivier cast his instants on his opponent's upkeep. That forced Zvi to try to counter on his upkeep, rather than after he was up a half dozen cards in hand.

The ploy continued working for Ruel, who simply kept casting Howling Mine effects. Zvi continued dropping lands, playing the occasional mana creature, and discarding. He was trying to amass enough counters to work on ending Olivier's stream of combat-nullifying instants. Ruel sacrificed a Quest for the Ancient Secrets to reshuffle his graveyard, putting a number of Fogs back into circulation in his deck. He then drew six cards during his draw step and an additional card on his turn thanks to Jace Beleren. He didn't have any effects for Zvi's upkeep, however, and it looked possible the big turn was at hand.

Olivier cast Safe Passage to Fog, and Zvi cast Bant Charm. Angelsong resolved for Olivier, however, and the game of cat and mouse continued. Zvi expanded his board with two Noble Hierarchs, but he looked to be in bad shape. Olivier cast a Time Warp on his turn, building Jace Beleren to six counters. A second Time Warp resolved, but a third cast in the same turn was countered. His fourth resolved, however, and he continued to take additional turn and Jace Beleren continued to build toward a lethal Ultimate.

"This is so ironic," Zvi laughed, before adding, "on SO many levels!"

Mowshowitz, made famous in part by his "Turbo Land" combo deck that set up the ability to take infinite turns with Time Warp. The Tempest rare was coming back to haunt him, hard, as Olivier chained turn after turn setting up to pull the trigger on his Jace.

"This deck is so much better at a Pro Tour than at a Grand Prix," Ruel said, pointing out that at the Grand Prix level he rarely had time to finish three games (Grand Prixs have ten fewer minutes per round than Pro Tours) and constantly had to remind players to draw their extra cards from his Howling Mine effects.

"So ... You will play I suppose?" Olivier asked his opponent as they finished shuffling their decks.

"Yeah. In a world of Howling Mines, that seems extremely important," Zvi replied.

The final game of the match started with Zvi on a Birds of Paradise, and Olivier had no second-turn Howling Mine. A Knight of the Reliquary for Mowshowitz was met with Flashfreeze from Olivier, who pulled the trigger on Howling Mine on his third turn. Mowshowitz simply cast two Noble Hierarchs, but kept two mana up to counter his opponent's Day of Judgment. With the turn back, the American cast Finest Hour, allowing him to attack for a whopping 9 with a single Noble Hierarch.

"Look Ma, no power!" Mowshowitz laughed after combat, pointing at his army of 0/1s. Thanks to exalted triggers, however, his team packed a much larger bite.

He added a Stirring Wildwood to the table as well, before shipping things back. The creature land threatened to be a huge problem for Ruel, who needed to keep fogs going to stay alive. He tried to do exactly that with a Safe Passage a turn later, but Zvi was ready with Negate. His creature land attack took his opponent to 4. 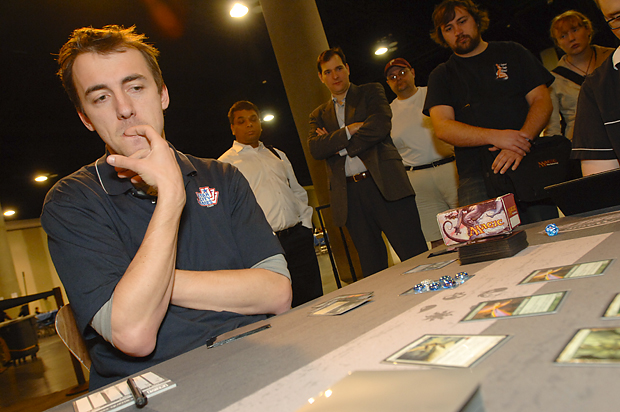 Can the affable Ruel ponder his way out of this quandary?

Trying to keep his head above water, Olivier chained two Time Warps, netting himself a grip of extra cards from Howling Mine. He cast a second copy of the artifact and shipped the turn to his opponent. Zvi waited patiently for a Fog on his upkeep, but when none was forthcoming, he drew three for the turn and sent a Stirring Wildwood sideways. Ruel tried for Angelsong, and had a backup copy when Zvi used Bant Charm to counter.

The game settled back into a familiar state from the second duel; Zvi built up his manabase slowly while trying to get in with a single creature each turn, made lethal by exalted triggers. Olivier worked on nullifying the effects of the combat step with Fogs while building up his mana base and cranking Jace Beleren toward his Ultimate.

Things took a different turn, however, as Zvi cast Admonition Angel while his opponent was low on mana. The mighty Angel, fresh out of Worldwake, was quickly joined by a Misty Rainforest. That allowed Zvi to exile two of his opponent's permanents, twin copies of Howling Mine. It was a monstrous surprise play from the New Yorker, who was able to use the new rare on the block to make a huge impact on the game.

Olivier seemed a little surprised by the 6/6, and tried to dig his way to a solution. Without his Howling Mines, he would have some trouble picking up enough extra cards each turn to do that. He did manage to resolve an Angelsong to stay alive, but Zvi had a second fetch land for his turn, taking out the final Howling Mine on the battlefield and Jace Beleren as well. A second copy of Finest Hour meant an attack from any creature on Zvi's side of the table was lethal for his opponent.

Unable to draw all the extra card fuel he needed to keep his Fog engine going, Olivier was forced to dig as far as he could to stay alive. A Jace Beleren picked him up one additional card, but it wasn't a Fog.

After the match, Zvi said to his opponent "I wanted to play that deck, I just didn't think it was good." Ruel just smiled. Turning to the coverage reporter, Olivier asked to shout out to his local store back home in Lille, France. "Say hi to everyone at Trolls Et Petits Lutins!"

3 Day of Judgment 3 Font of Mythos