aniel Gardner is the reigning UK National Champion. He began the weekend with a sweep of Standard, playing Bant. His opponent was 2007's Japanese National Champion, Masaya Kitayama, who likewise breezed through Standard, with Jund. At 7-2, both players were eager to escape the draft portion and get back to busting heads in Standard.

Gardner was first on the board with Plated Geopede. Kitayama Harrowed into a board of four Forests and a Frontier Guide. Gardner drew his card and shook his head. His deck had refused to deliver a third land, and his Geopede could only hit for 1. 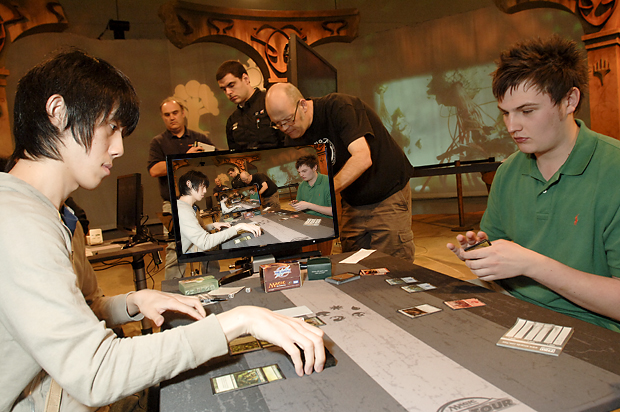 Masaya Kitayama and Daniel Gardner both swept the Standard rounds, but Draft may be a different story.

Kitayama put the pressure on him with Bestial Menace. Into the Roil took care of the Elephant, but Gardner could not draw the land he needed. Kitayama hit for 2 and played Khalni Gem, picking up two lands to feed the Hedron Rover that followed.

Gardner drew and cast Akoum Battlesinger, then took 8 on the chin thanks to Frontier Guide's searching out a second Forest. Finally his deck coughed up an Island. He double-blocked the Wolf on its next attack, and after first strike damage cast Æther Tradewinds, picking up his Geopede and sending the Hedron Rover home.

Kitayama recast his Rover and a Lotus Cobra, and when all Gardner could do was recast his Geopede, showed him Vapor Snare for the win.

Kitayama's first play was an accelerating Explore. Gardner spent three on a tapped Crusher Zendikon and passed it back. Kitayama answered with Leatherback Baloth and a Khalni Garden.

Gardner drew and shook his head. After thinking hard he suited up his land with Goblin War Paint and swung in. Kitayama accepted the trade and Gardner replayed the dead land, adding an Adventuring Gear to the board. Kitayama cast Graypelt Hunter and passed. 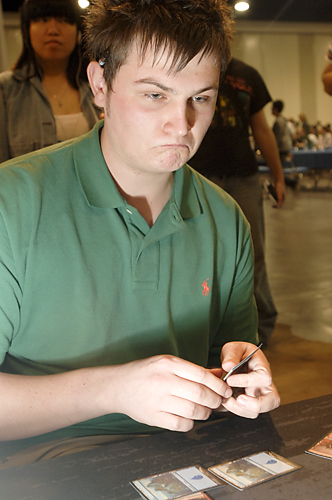 Gardner tries to dig his way out.

Gardner played his fourth land and Cosi's Ravager. Kitayama hit for 3 and brought down Baloth Woodcrasher. Cosi's Ravager picked up the Gear and attacked Kitayama for 4, soaked up by the Plant token. He passed the turn with four mana open. Kitayama upsized his Woodcrasher and swung in with both creatures. Gardner showed him Stone Idol Trap, killing the Graypelt Hunter.

Kitayama still had plenty of gas in the tank, however. First Khalni Gem, picking up his Khalni Garden, then Vapor Snare on the equipped Ravager.

Again, Gardner's mana troubles made things awkward for him. He needed to play Surrakar Banisher to buy time, but that tapped him out and left the Gear on the Vapor Snared Ravager. He frowned and hit for 6 with his giant stone head. Kitayama played a land, pinging him and hitting for 4, then recasting his Woodcrasher. Gardner drew, double-checked, then extended the hand.

After the match, I talked to Kitayama about his draft. He said that he prefers to draft monocolored decks, forcing them and then rounding out his deck with late cards that don't fit into other archetypes.

He wasn't gunning for that this draft, though, dabbling first in white and then blue, but Worldwake served up so many playables in green that he could comfortably cut everything except Vapor Snare, made easier thanks to Harrow, Frontier Guide and Khalni Gem. He also said that the two most important green commons in Worldwake are Arbor Elf and Gnarlid Pack, which he calls "extremely underrated." 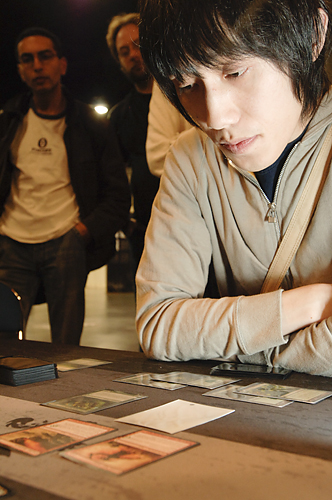