Pro Tour–San Diego Round 11: The Depths of Despair

ussell Heitzmann may not have a Pro Player level this year, but he is currently playing at the top tables in Day 2 of his fourth Pro Tour. He drafted an aggressive white-blue deck. 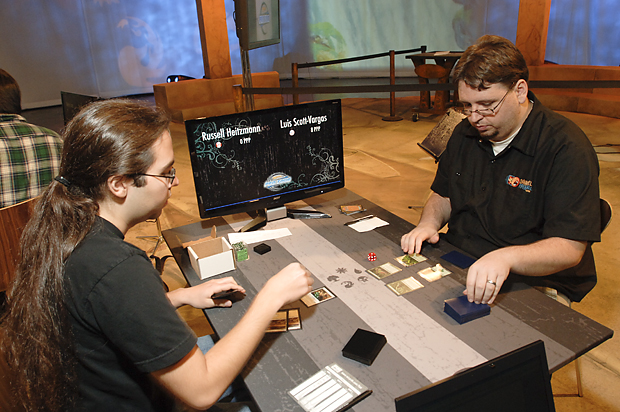 Across from him sits a Level 8 mage in the form of Luis Scott-Vargas. Looking to continue his streak of Pro Tour match wins here in Round 11. Mono-green is the direction his draft went earlier today.

Russell started with Steppe Lynx, with nothing from Luis. Plains number two pumped Steppe Lynx and brought Luis to 18. Luis halted the assault with Nissa's Chosen, and Russell added a Plains and Apex Hawk to the fray. Luis cast a Grazing Gladehart on his turn. Unfortunately it went on a Journey to Nowhere, which Russell returned to his hand with Into the Roil while the "enters the battlefield" trigger was on the stack. So it'd be likely another of Luis's creatures would be joining the Antelope on its trek. Luis offered a Snapping Creeper to Russell to take that trip, and Russell gladly accepted the offer.

Russell added a Fledgling Griffin to his troops, and Luis had no more to offer than a Forest on his turn. An attack with all of Russell's creatures brought Luis down to 14. Russell dropped a second Fledgling Griffin, along with a Kazandu Blademaster, and passed back to Luis. After drawing his card, Luis decided it was time for Game 2.

Luis got the ball rolling with turn-one Arbor Elf, then turn-two River Boa and Khalni Garden. Russell's first spell was Kazandu Blademaster. Luis helped clog the battlefield with a Snapping Creeper, and Russell continued the ground stall theme with Perimeter Captain, but also added Fledgling Griffin to the fray. 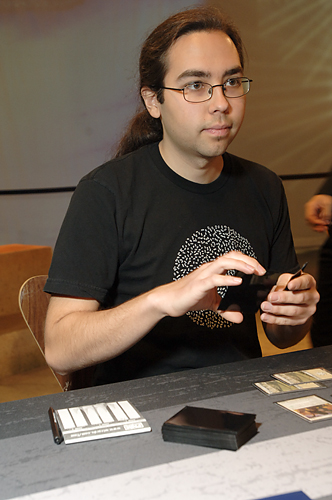 After Luis laid his second Forest and Timbermaw Larva, Russell played an Island and enchanted a Plains with Wind Zendikon. Russell's newly increased air force flew in for 4, which brought Luis down to 16. Russell's Island meant that Luis could swim through with his River Boa, and Luis's two Forests meant the larva could crash through and opposing blockers. Russell took 6 and went to 14. Russell returned with an attack for 2 with Fledgling Griffin then played his second Griffin before ending his turn.

Luis continued where he left off by sending in the team. Russell had a Pitfall Trap this time for the Larva, but unkicked Vines of the Vastwood gave the larva shroud.

Russell threw Blademaster in the path of the Timbermaw Larva and took 4 from the Boa and Creeper. Good thing Luis didn't play the vines with kicker, as now he had just enough mana for a post combat Graypelt Hunter. Russell drew and passed without playing a card. Down came Timbermaw Ranger and in went Luis's team. Russell traded 2 of his creatures for the Graypelt and chumped the larva with another and took 2 from the islandwalking boa. Russell went down to 12. Russell had no action again. Luis's continued to turn his creatures sideways and Russell's creatures continued to chump-block. Russell took a look at his next card and scooped.

First play of Game 3 was turn-two River Boa from Luis. Russell answered with turn-three Fledgling Griffin. Luis attacked for 2 then laid a Nissa's Chosen. Russell missed his fourth land drop and added Apex Hawks to his side of the battlefield. Luis attacked Russell with River Boa and Nissa's Chosen, which brought Russell down to 14. Luis tapped 3 Forest and a Khalni Gardens for Timbermaw Larva. Russell found land number 4 and attacked for 4 in the air dropping Luis to 16. Lightkeeper of Emeria joined the ranks for Russell. The Larva, Chosen, and Boa went into the Red Zone. No blocks from Russell sent his life total to 6.

Russell needed to find an answer. What he found was Halimar Depths, which could prove helpful for next turn. After rearranging his top three cards, Russell exiled River Boa with Journey to Nowhere and passed the turn. Luis, never shy about applying the beatdown, again attacked with everything. Russell had a blocker for each one. 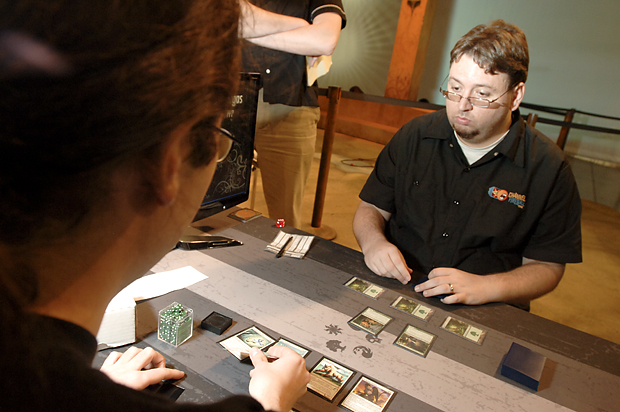 So does LSV, but he always looks like that.

After the dust settled, only the Lightkeeper remained on Russell's side. All of Luis's forces remained. Now would be the time we'd find out what lurked in the Halimar Depths. Another Lightkeeper of Emeria, kicked once, brought Russell up to 8 and gave him a very important additional blocker. Luis had Oran-Rief Recluse and six mana to kick it. Down went one Lightkeeper, and it was all but over after the second Lightkeeper chump-blocked the gradually enlarging Timbermaw Larva. After the top of Russell's deck didn't yield any miracles, he conceded to the now 11-0 Luis Scott-Vargas.