Pro Tour–San Diego Round 12: Nothing to Say

eigning Player of the Year Yuuya Watanabe sat down to his Round 12 feature match with a 6-0 record from two drafts. His opponent, Belgian Peter Vieren, had gone 5-1 in the Limited, but Watanabe seemed to think the European pro was favored in the match.

"Good Limited, bad Standard," the PoY said with a smile

Vieren gave a laugh, but when you sit down across from a player as good as Watanabe, you have to take them seriously no matter how bad they think their deck choice is. 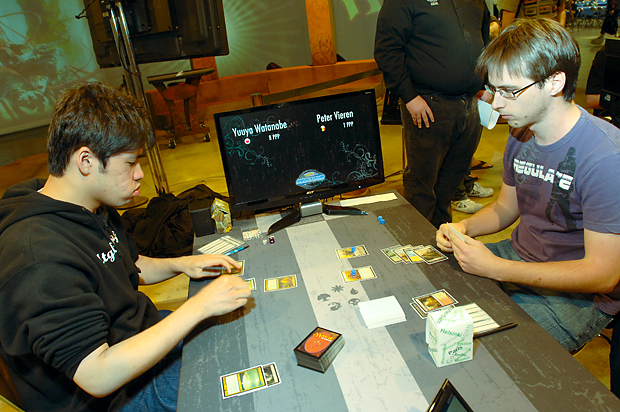 Despite an impressive resume, Yuuya Watanabe does not seem to like his chances against Peter Vieren here in the Standard rounds.

Vieren won the die roll and had a second-turn White Knight. That would prove a formidable blocker as Watanabe cast a Putrid Leech for his second turn. Vieren wasn't afraid of the bear, however, sending in his Knight before casting Aven Mimeomancer. The 3/1 was a key component of the white-blue deck the Belgian had brought for Standard, one of many surprising cards seeing play in the feature match arena this weekend. This Mimeomancer didn't last long, however, dying to a Maelstrom Pulse from Yuuya.

Ajani Goldmane hit the table for Vieren, who used it to pump his Knight and attack thanks to vigilance. A second activation of the planeswalker would put the Knight out of range of Lightning Bolt, one of the few nonblack sources of removal Jund decks like Yuuya's have to destroy the first striker. Watanabe built his board up with a Rampaging Ravine and Sprouting Thrinax, but Peter was ready with Oblivion Ring for the 3/3 token-maker. Trying to figure out a way to get in for some damage, Yuuya went into the tank, mulling over all of his options. 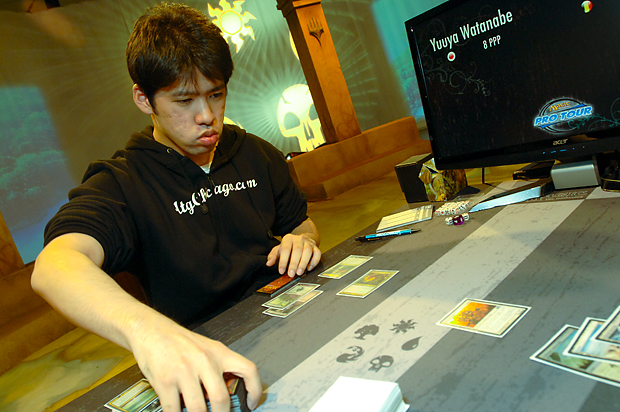 Watanabe is a scrapper. You can see it in his eyes.

He finally decided to plop a second Putrid Leech and a replacement Sprouting Thrinax to the table, leaving his opponent to face down a burgeoning field of opposing threats. While his 4/4 White Knight was a strong means of holding the fort down, he needed to be careful or risk being overrun by his opponent's creatures. A Knight of the White Orchid for Peter, growing alongside White Knight thanks to Ajani, helped shore things up. The White Knight, now a 5/5, was big enough to attack Yuuya to just 5 life.

The Japanese superstar sent his entire team to the Red Zone aimed at Ajani Goldmane. One of the Leeches was killed, but the mighty Goldmane was destroyed. Yuuya kept his creature land back to block, but when Peter cast a replacement Ajani, he sucked in his breath forcefully and paused the game to examine his options. After much consideration he opted to allow the planeswalker to resolve, then attempted to Bituminous Blast his own Sprouting Thrinax. That forced Path to Exile from Peter's hand to prevent any Saproling generation, and it was down to the cascade reveal to determine if Yuuya could survive the turn. His flip? Bloodbraid Elf. The 3/2 then flipped up a Putrid Leech, and it looked like Watanabe had done it. Well, he had done it for one turn, finding himself able to stay alive a bit longer.

Peter pumped his team with Ajani and attacked with both of his creatures. Still in commanding position, he was hoping to ride his white weenies and Ajani to victory. Still trying to grind out some type of comeback, Yuuya cast a Broodmate Dragon. The 4/4 token could block White Knight, but because the white "weenie" was pumped to 6/6 and still had first strike, it couldn't even trade. Peter cast a Baneslayer Angel, pumped his team again, and attacked to leave Yuuya with just his Broodmate Dragon left to defend. The mighty Dragon wasn't enough, however, as Vieren cast Jace, the Mind Sculptor the following turn to Unsummon the 4/4 and turned his team sideways for more than lethal. 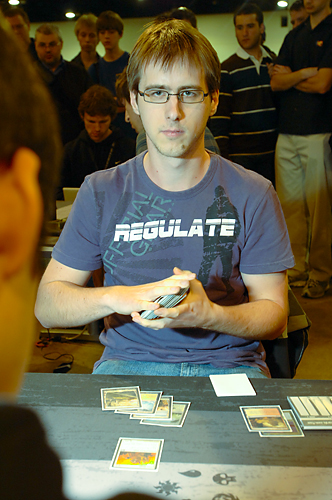 Watanabe is a scrapper. You can see it in his eyes.

Shuffling and sideboarding for the second game, the two players sat in dead silence. While that's not unusual in a matchup between two players who don't share their native language, both had varying levels of fluency in English to enable them to engage one another. It seemed there was just nothing to say.

After seeing their opening sevens, both players opted to mulligan. Behind them, the smell of strawberry shortcake teased their concentration levels with the aroma of distraction. An announcement was made in the background announcing free portions of the confection were available for interested players. Before long, former World Champion Makihito Mihara ambled over to support his countryman Yuuya with a plate full of strawberry shortcakey goodness.

It didn't do Watanabe much good, however, as he was forced to send his six card hand back for five. Peter was happy to keep, and when Yuuya looked at his five he knew he couldn't keep them. They went back to the top of the deck, and he had to settle for a hand of four cards. He did manage to open on three straight lands, but doing so allowed Peter to pick up a free land as he cast a third-turn Knight of the White Orchid. The 2/2 fetched up a Plains, and when Peter played a second one he was able to cast Kor Firewalker. That brought a response from Yuuya: Lightning Bolt to kill the Knight of the White Orchid.

Bloodbraid Elf hit for Watanabe, netting him a free Blightning, though the discard spell functionally only dealt 1 damage after Peter gained life from Firewalker for both the Elf and the Blightning. He ditched two removal spells, Journey to Nowhere and Oblivion Ring. It turned out Vieren didn't need the removal: he had Mind Control, which he was happy to use on his opponent's Bloodbraid Elf to begin getting his beat on.

Hoping to keep up, Yuuya cast Putrid Leech, but lost it to Path to Exile from Vieren. That allowed an attack for 5, dropping Watanabe to 9 life. The following turn, when he didn't have a spell, Peter was able to take the match by attacking with both his Kor Firewalker and the stolen Bloodbraid Elf, as well as an activated Celestial Colonnade.