t’s always a great thing when we get towards the last stretch of the Swiss rounds and find two of the big young stars of the game battling it out for a spot on Sunday. Daniel Gardner and Lucas Florent are two of the best young players in the world right now, representing Europe here in San Diego. Gardner was this past year’s Great Britain National Champ, and his Bant deck is a pseudo-update of the Barnslayer deck he used to win that tournament. Lucas Florent is an up-and-coming French pro who has recently integrated himself into “the” group of French pros, and his ability to test and work with them on his game has borne measurable fruit.

Florent won the die roll and chose to go first. A barrage of mana acceleration hit the table for both players, with Florent getting a pair of Llanowar Elves and a Noble Hierarch to Gardner’s Lotus Cobra and Noble Hierarch. Florent used his mana to power out a Master of the Wild Hunt, but it ended up getting returned by a Jace, the Mind Sculptor. Jace packed it in on the following turn when Florent sent in an exalted Llanowar Elves to finish him off. Gardner could have blocked with a Lotus Cobra, but he had a big couple of turns planned and was going to need all the mana he could get. 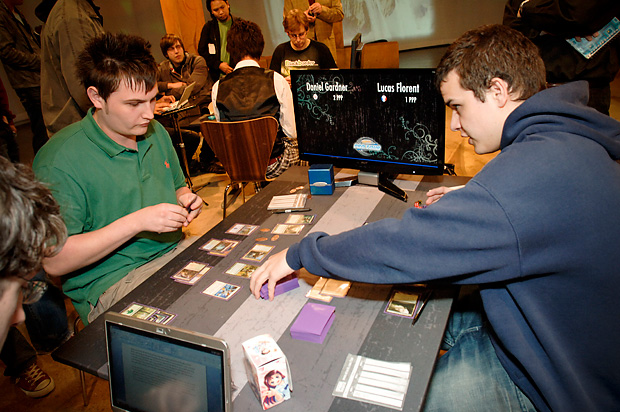 David Gardner and Lucas Florent face off in an epic first game.

Florent added the first monster to his new board with a Leatherback Baloth. Gardner’s decision to keep his Lotus Cobra around allowed him to drop both Borderland Ranger and Knight of the Reliquary on the following turn. Neither of them was going to stand in the way when the Baloth crashed in, and Gardner dropped to 14. Florent added a Master of the Wild Hunt once more, and this time, it stuck. Gardner started his deck rolling on the following turn with an Emeria Angel. The Knight of the Reliquary he had in play allowed for some sick interactions with Lotus Cobra and the Angel, netting him a Baneslayer Angel and three tokens which pushed him from a short step behind to ridiculously ahead.

Florent had a slightly smaller token generator with a once-kicked Wolfbriar Elemental, as well as a recently untapped Oran-Rief, the Vastwood. The new Wolf allowed him to use his Master of the Wild Hunt to take out the fresh Baneslayer, though Gardner did gain 5 life, going back up to 18. Florent had no reason not to attack with his Baloth, and it ate a now-useless Borderland Ranger. A second Noble Hierarch for Gardner allowed him to send his Emeria Angel over for 5 before dropping his last card, a Great Sable Stag, into play.

At a casual glance, Florent had the much larger creatures on the battlefield, but Gardner’s interactions made his board capable of swarming Florent down in just a couple of turns. Florent sent his Elemental and Baloth in to attack, but they were stopped short of reaching Gardner’s life total by two Bird tokens. A second Master of the Wild Hunt created an avenue to let him start making an army of tokens of his own. When he tried to use his original to off Gardner’s Knight, Gardner activated the Knight to search out a Sejiri Steppe from his deck, giving the Knight protection from green. That and a Misty Rainforest activation also gave him two additional flyers from the Emeria Angel.

Jace, the Mind Sculptor came back down for Gardner, immediately removing Florent’s second Master of the Wild Hunt. At this point, all Florent had untapped were two Llanowar Elves. This put Gardner in a good spot to begin attacking with more than just the Angel. Before he could send his whole team in, a judge was called over because of what is apparently one of the most difficult to understand cards in the format: Master of the Wild Hunt. On the previous turn, when Florent’s attempt to kill the Knight of the Reliquary was stopped by Sejiri Steppe, he had killed his Wolves. As Raphael Levy pointed out, the ability itself is countered, meaning that the Knight never has a chance to deal damage to the Wolves. Ultimately, the game state was left as is, and a game rule violation was issued. Gardner just went back about his business, attacking with his Great Sable Stag and his flyers. 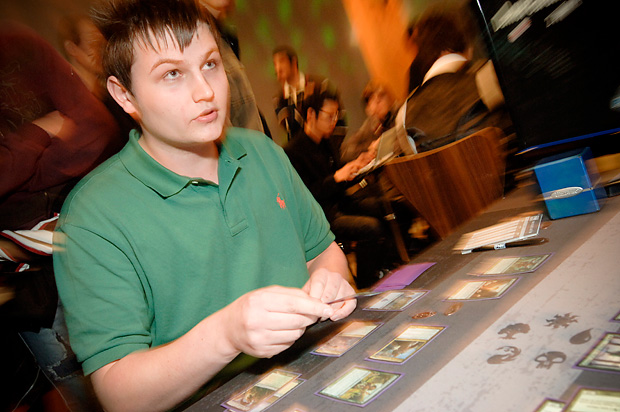 On the following turn, Florent had a few tricks. He replayed his Master of the Wild Hunt and played an unkicked Joraga Warcaller. In response to Gardner using his Knight of the Reliquary (and accidentally sacrificing and Island instead of the Plains right underneath it, netting another warning), Florent used his Oran-Rief to pump his men, and then shot the Emeria Angel out of the sky with his Master. Unfortunately, the combination of other creatures and Jace was too much to deal with, and he packed it in after his draw, ending, as they put it, “a fairly messy game.”

Since both players are from western Europe, it should come as no surprise that these two have seen each other in at least one PTQ, as they discussed while sideboarding. Apparently, Florent had made the trip to London during a Lorwyn-block Limited PTQ, and he and Daniel had played in the end rounds of the Swiss.

Unfortunately, considering his French heritage, it seemed that taking a couple trips to Paris was also in the cards this match, especially since a reasonable hand was not. Eventually settling on a five card hand that allowed for a second-turn Leatherback Baloth, he immediately went on the offensive. Unfortunately, Gardner had a Path to exile for the Baloth before it could even connect once, as well as a Noble Hierarch and Lotus Cobra to put himself ahead in mana production. 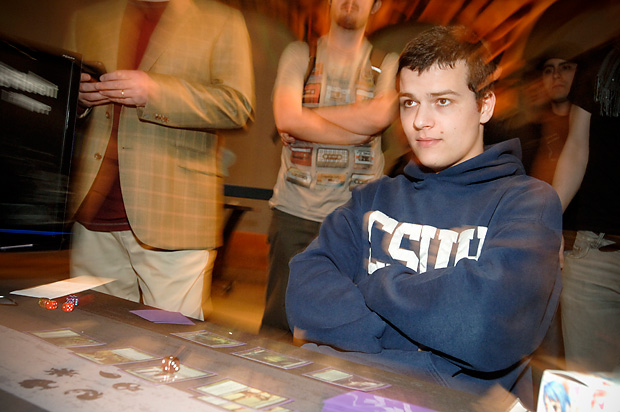 With this mana advantage, he powered out a Master of the Wild Hunt and a Jace, the Mind Sculptor, which started working on furthering the card advantage he had gained by Florent’s misfortune. Florent was in quite the quandary. All he could do was shrug and shake his head as he put a Master of the Wild Hunt of his own into play. Vapor Snare stole Florent’s Master, and his Jace started adding counters. It was virtually impossible for Florent to win at this point, and it only took one peek at his top card (which Gardner already knew) before he conceded.

2 Vines of Vastwood 3 Path to Exile

1 Druid of the Anima 1 Naturalize