Pro Tour–San Diego Round 14: “What a Master”

Luis Scott-Vargas had already locked up a spot in the Top 8, but now he was playing for Pro Tour history: to dethrone Ryan Fuller’s 14-0 as the longest undefeated streak at a Pro Tour. Standing in his way was Daniel Gardner, who at 11-2 just needed a win for to nearly lock up a berth of his own. The match-up was Gardner’s Bant against Scott-Vargas’s Boss Naya. 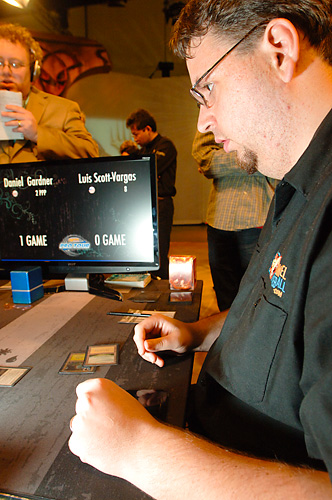 With the Top 8 locked up, Luis Scott-Vargas is playing for Pro Tour history.Gardner led out with Noble Hierarch but Scott-Vargas had Arid Mesa and Lightning Bolt waiting in hand. Gardner untapped and played a replacement, adding a Stirring Wildwood. Scott-Vargas played his own Wildwood and passed the turn.

With the Hierarch’s help, Gardner made an Emeria Angel. Scott-Vargas had to content himself with a Knight of the Reliquary. It didn’t last long. Gardner had Lotus Cobra and Misty Rainforest to bust out Jace, the Mind Sculptor. He bounced the Knight and hit for 4.

Scott-Vargas came back with Bloodbraid Elf but only scored a Noble Hierarch. The Emerian air force came over, and after checking Scott-Vargas’s top card with Jace, Gardner cast a Baneslayer Angel. Scott-Vargas confirmed that Gardner hadn’t left him a Path to Exile and conceded.

Scott-Vargas: “I think this is the second time I’ve been down a game all tournament.” 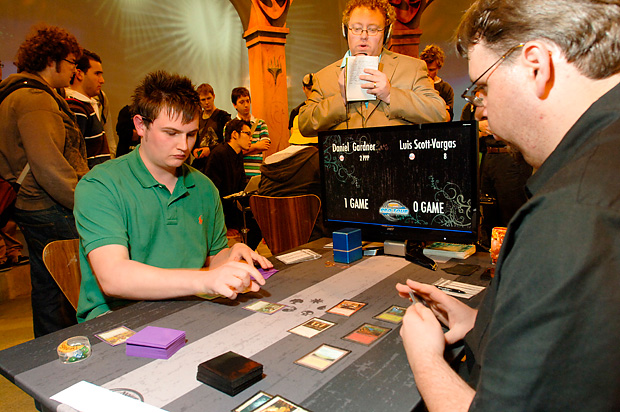 Scott-Vargas mulliganed his opening seven and the crowd murmured to itself. They were standing three-deep, and most of them were rooting for a 16-0 performance.

He kept his six and led with Misty Rainforest, and after a Seaside Citadel from Gardner, cashed it in for a regular Forest. Arid Mesa got him a Plains, which got him Stoneforge Mystic, in turn getting him Basilisk Collar. Gardner played a second Citadel and a Noble Hierarch, but Scott-Vargas had the second half of the combo in-hand. Down came the Cunning Sparkmage, sending the Hierarch to the graveyard.

Now Scott-Vargas was ready to bring down the Collar. He attached it to his Sparkmage and cast Knight of the Reliquary. Gardner’s face made it clear he still didn’t have removal. He made an Emeria Angel just to get the token, as the Mage shot the Angel out of the sky.

Scott-Vargas was content to sit on his weapons. He swung in with Raging Ravine to get a counter on it and gave it back to Gardner. Gardner made another Firewalker and hit for one with his token, losing his Ranger to the deadly Sparkmage. Scott-Vargas dug out Stirring Wildwood with his Knight, then untapped and played Baneslayer. Gardner took one hit, drew, and started shuffling for the deciding game. 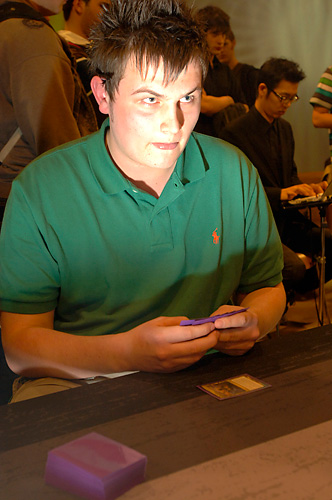 Daniel Gardner, on the other hand, is ‘just’ playing for a PT Top 8.Gardner was fast off the blocks. He started with an unanswered Hierarch into a Knight of the Reliquary. Scott-Vargas’s Terramorphic Expanse fetched him a Forest, then he cast Plains for Path to Exile on the Knight. Gardner replaced it with Master of the Wild Hunt, alongside a Celestial Colonnade.

Scott-Vargas got his third land with Arid Mesa and played a 4/4 Knight of the Reliquary. Gardner got a Wolf from his Master of the Wild Hunt, made a second Hierarch and attacked for 2 with his first one. He played Kor Firewalker and passed the turn. Scott-Vargas tried a Bloodbraid Elf, but it cascaded into a lowly Hierarch, dispatched immediately by the Master.

Gardner tightened his vice with Jace, the Mind Sculptor and checked Scott-Vargas’s top card. He left it where it was, but Scott-Vargas just dug out a Terramorphic Expanse for a Forest with his Knight of the Reliquary. He untapped and played a second Knight, now quite large.

Gardner used the Master of the Wild Hunt on the Bloodbraid Elf, trading a Wolf, then untapped and targeted himself with Jace’s scry ability. He activated his Celestial Colonnade and swung in, but Scott-Vargas’s Knight of the Reliquary searched up Tectonic Edge to destroy it.

His next draw was Basilisk Collar. A Wolf took the hit from the huge Knight. Gardner grew his Jace and made a grab for the slipping momentum with a Vapor Snare on the equipped Knight, but the other simply tutored for Sejiri Steppe and stopped it. Now Scott-Vargas was swinging with both giants and his life total was getting out of hand. A Bloodbraid Elf gave him a Cunning Sparkmage who took out a Hierarch before the Master killed him.

Gardner untapped, bumped Jace up to 11 loyalty, and played a second Kor Firewalker, the last card in his hand. Scott Vargas shut down the Wolf factory with a Lightning Bolt, enabling a second Cunning Sparkmage from his hand to pick up the Basilisk Collar.

Gardner drew, then Brainstormed with Jace’s help. He kept a Knight of the Reliquary and a Borderland Ranger, fetching an island. Scott-Vargas shot down the Knight, untapped, and drew his card.

Ben Stark, from the crowd: “What a master.”

Scott-Vargas moved the Collar back to one of his Knights and attacked, bringing his life total to a comfortable 70 and costing Gardner two more blockers. Then he showed what he had drawn: Oblivion Ring for Jace. The crowd showed its appreciation.