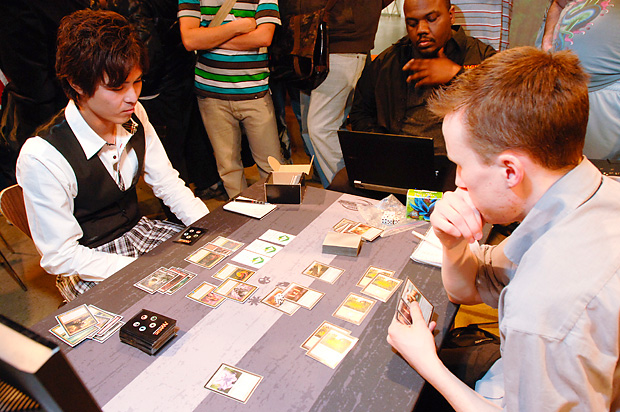 Up-and-comers Yoshihiko Ikawa and Craig Wescoe face off for a shot at the Top 8.

Across from him sat Yoshihiko Ikawa. A PTQ Top 8 regular in Tokyo, Ikawa is playing in his second Pro Tour and is on pace have his PT Sunday debut. Ikawa, fully partaking in the maxim “Play the game, see the world,” has traveled to America for the first time to play Jund, as many other Japanese players had.

Wescoe started the game off with Kor Firewalker while in typical Jund fashion Ikawa developed his mana base. Wescoe attacked with Firewalker for 2 then followed up with Stoneforge Mystic into Trusty Machete. On turn three, Ikawa finally decided to cast his first spell; Sprouting Thrinax. Next turn, Wescoe equipped his Firewalker with Trusty Machete and attacked through the helpless thrinax dropping Ikawa to 15. A White Knight came down on defense which would further capitalize on the very colorful nature of the 3/3 lizard. Ikawa took this opportunity to bolt White Knight while Wescoe was tapped out. Oblivion Ring hit the board from Wescoe in an attempt to clear the path for his Stoneforge Mystic, but Ikawa Terminated his own Thrinax in response to net three Saproling tokens. Nonetheless, Stoneforge Mystic grabbed a Trusty Machete and charged gallantly into the fray of 1/1 lizard spawn. Ikawa accepted and dropped to 12. 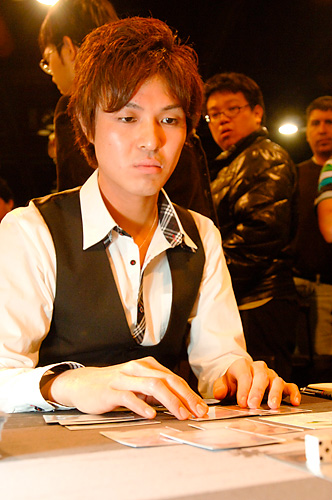 Dapper and calm, Ikawa gives it his all.

Ikawa now had four untapped mana, which is when the fun began. Bloodbraid Elf yielded a Maelstrom Pulse, which took out the Kor Firewalker. Ikawa passed without an attack. Wescoe cast Kor Skyfisher returning his Mystic, only to recast it and fetch out Sigil of Distinction. Things were looking bleak for Ikawa. Determined to keep himself in the game, he decided to keep the life race close by attacking with Bloodbraid Elf and bring Wescoe to 17. Sigil of Distinction with five counters hit play next turn. On the equip attempt, however, Ikawa responded with Bituminous Blast on the Skyfisher, netting a bonus Putrid Leech. Wescoe could only equip Sigil to Stoneforge Mystic, bringing the charge counter count to three, and pass the turn.

Blightning from Ikawa removed another Mystic and a Steppe Lynx from Wescoe’s hand. Unfazed, Wescoe handed the old Trusty Machete to the already “distinct” Stoneforge Mystic and attacked with his 6/6 Kor Equipment savant. Ikawa threw a Saproling in its path. Wescoe followed post-combat with White Knight and Steppe Lynx. On his turn, Ikawa cast Siege-Gang Commander. One of the three Goblin tokens shot down the White Knight immediately. An attack from Ikawa’s Putrid Leech, Bloodbraid Elf, and Saprolings, plus a chump-block with Lynx dropped Wescoe to 10. Wescoe drew Kor Skyfisher off the top and used it to replay Oblivion Ring on Siege-Gang Commander. Wescoe sat back with two blockers to fend off the growing forces of Ikawa. Ikawa untapped, then cast Bituminous Blast on the Skyfisher. The Blast flipped up a Bloodbraid Elf, which revealed a Maelstrom Pulse. This was enough to get the concession from Wescoe.

Things were looking good for both players, with turn-one Trusty Machete, turn-two Kor Firewalker for Wescoe, and turn-two Putrid Leech for Ikawa. When Wescoe missed his third land drop, he settled for White Knight. Ikawa had a third land, which centered the battlefield untapped, and Maelstrom Pulsed Wescoe’s Machete. 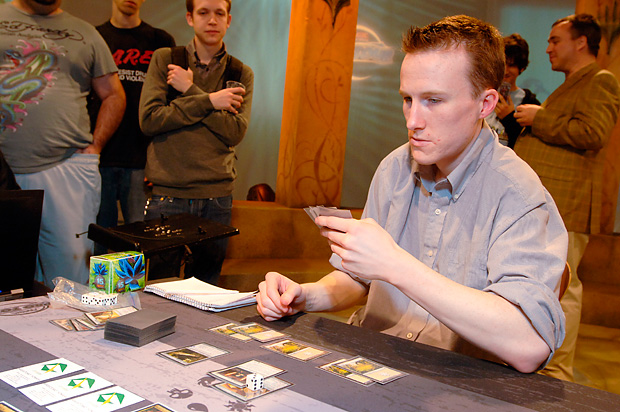 Wescoe, still stuck on two lands, attacked Ikawa down to 17 and played Stoneforge Mystic putting Basilisk collar in hand. Wescoe didn’t find his third land and was forced to pass the turn. Ikawa continued his curve with Master of the Wild Hunt on turn four, then Siege-Gang Commander on turn five. Wescoe, unable to find the land he needed to stay in this game, revealed the Day of Judgment in his grip as he extended his hand to Ikawa.