That’s what it said, written in dark Sharpie on the hand of Belgian player Niels Viaene as he sat down to the final match of Swiss play for Pro Tour–San Diego. He was playing for a spot in the Top 8, but Daniel Gardner, a former British National Champion, stood in his way. Gardner had the better competitive resume of the two, and was looking to pick up his first Pro Tour Top 8.

Gardner won the die roll, and had the first creature of the game in the form of Knight of the Reliquary. The Conflux standout was a paltry 2/2, but a Stirring Wildwood promised to beef up Gardner’s attacking force if he couldn’t find himself more lands with which to get the Knight pumped up. Niels worked on developing his board and hand, using Fieldmist Borderpost to accelerate “land” drops, and preparing a Courier’s Capsule to boost the size of his hand. 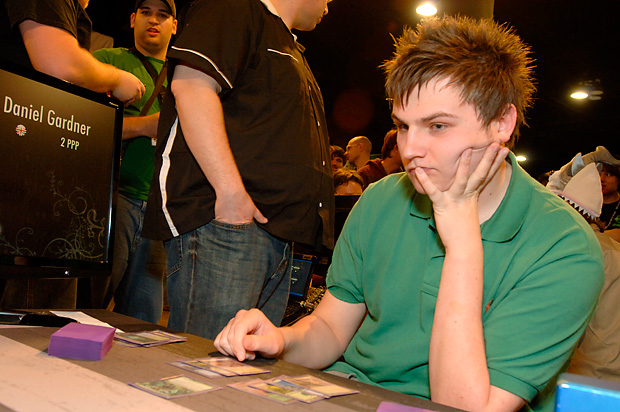 Embattled Brit David Gardner is oh so close to the Top 8.

The Knight of the Reliquary allowed Gardner to hasten out a Baneslayer Angel, one full turn before he would have been able to otherwise. Viaene didn’t seem pleased about that, but was ready with a Day of Judgment to knock both the Knight and the Angel out in one swoop. When Gardner re-upped with a second Knight of the Reliquary, Viaene had Jace, the Mind Sculptor to try to Brainstorm his way into a second answer.

The planeswalker was of no help, however, and paid its life for failing to pitch in, dying to an attack from the Knight a turn after it was cast. Gardner continued plumping out his board with a Great Sable Stag, but a second Day of Judgment from Viaene took out the 3/3 and the second Knight of the Reliquary. Trying to rebuild his army, Daniel Gardner cast Borderland Ranger to find the land he needed to have enough left over to finally attack with his Stirring Wildwood. That put Niels at 18 life, far from the danger zone.

A second Jace, the Mind Sculptor made an appearance on the battlefield, again Brainstorming for Niels. He tapped out for a Courier’s Capsule, but lost his Jace to the Wildwood. Gardner cast Great Sable Stag, and the control/beatdown match continued. Sphinx of Lost Truths with kicker gave Niels so many extra cards, he actually had to discard a Filigree Angel. Daniel continued attacking with his Sable Stag, but began taking hits from the Sphinx. Niels tapped out to cast Open the Vaults. The spell returned a host of artifacts to his side of the battlefield, and he gained a whopping 15 life from his Filigree Angel. The scores stood 26-15 in his favor.

Daniel Gardner was left shuffling his cards nervously back and forth in his hand. He needed some help to get out of the game, and his deck wasn’t providing it. He used Path to Exile to take out a Glassdust Hulk, which had returned after being cycled from Niels’ graveyard to the battlefield thanks to the Open the Vaults. Baneslayer Angel provided some small hope for Gardner, but when Viaene cast a second Open the Vaults, Daniel scooped things up rather than try to trudge through his opponent’s overwhelming board advantage.

With the other feature match finished behind them and American Luis Scott-Vargas becoming the first Pro Tour player to ever go 16-0 at the Pro Tour, Niels Viaene and Daniel Gardner kicked their match into high gear. Their pace picked up visibly, and Gardner tried to prepare some early attacks. A Celestial Colonnade he played on the first turn was morphed into Island by Spreading Seas from Niels. When he made a Knight of the Reliquary, Viaene was ready with Journey to Nowhere. Finally Gardner managed to land a Lotus Cobra, then used the 2/1 to help him cast a Jace, the Mind Sculptor in the same turn.

Even a planeswalker wasn’t powerful enough to withstand Viaene’s Open the Vaults deck. Oblivion Ring took out the Jace, but left the Lotus Cobra on the battlefield. Gardner cast Emeria Angel to continue building his army, but lost his entire team to Day of Judgment. He simply re-upped on the Angel, casting a second copy on his following turn, but lost it to a second Day of Judgment.

Down to one card and his draw step, the British player found a Knight of the Reliquary and cast it. It was taken out with Journey to Nowhere. A Baneslayer Angel off the top a turn later? A second Oblivion Ring. The crowd surrounding the two players couldn’t help but laugh at the situation; for every threat Gardner managed to come up with, his opponent was ready with a removal spell of some type. 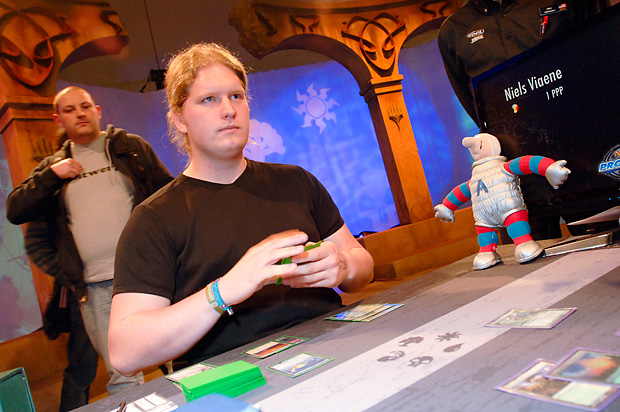 The one area Niels was struggling with was his land drops. He had failed to get much further than five, and had to use a Sphinx of the Lost Truths without kicker to help him out. That got him to seven lands, and, at a healthy 16 life, he began turning his Sphinx sideways. He took a 5-point hit from a Stirring Wildwood and Lotus Cobra to put him to 11, but managed to fire back with Open the Vaults. When the powerful sorcery resolved, Niels Viaene had all the gas he needed to take the match. Filigree Angel padded his life, Glassdust Hulk provided him the extra clock he needed, and two turns later he was attacking for the win.