"You know, I saw the pairing, and that was bad enough, but now it's a feature match to pile on the pressure." —Corey Mann

It's never a good thing to sit down across from the Yellowhat, especially in a young format. The mix of established archetypes and new cards is just candy to a deck designer. 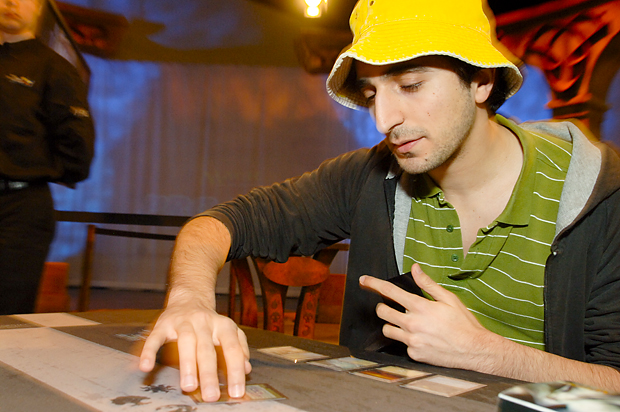 The origin of Gabriel 'Yellowhat' Nassif's nickname is not exactly a mystery.

Mann started drawing out countermagic. His Blightning and Sprouting Thrinax were both Cancelled. Nassif spent his fifth turn on an Everflowing Chalice for one, and restocked with a Halimar Depths–assisted Treasure Hunt for two lands and second Chalice. Mann finally got to stick a threat: Vampire Nighthawk.

Nassif dropped Jace, the Mind Sculptor and Brainstormed. Scalding Tarn fetching Island, got rid of the chaff he didn't want to draw. He played a second Chalice for one and passed the turn with Chalice and Colonnade up.

Bloodbraid Elf spilled a handful of cards before hitting Lightning Bolt, dispatching Jace. Mann swung in and lost his Elf to Path to Exile. Nassif showed him what card advantage was all about with a Mind Spring for seven, discarding two lands.

Mann had nothing to add to the board and continued to swing with Vampire Nighthawk. Nassif made another Halimar Depths / Treasure Hunt combo, this time for Celestial Colonnade and Martial Coup. Oblivion Ring put the Nighthawk on ice. Mann remained inert.

Now Nassif was ready to go on the offensive. He made six tokens with Martial Coup, leaving two mana up. Mann made a Bloodbraid Elf but cascaded into an unexciting Rampant Growth. He swept away the tokens with Maelstrom Pulse.

Nassif orchestrated a second Coup, this time for eight. Mann had a second Maelstrom Pulse to sweep the tokens away and a Vampire Nighthawk to get back on the board. It joined its brother in Oblivion, and now it seemed that Mann was truly out of gas. Nassif fired up his Colonnades and started to smash, and soon Mann was dead.

On the play, Mann had a clear path to Blightning thanks to Nassif's "enters the battlefield tapped" lands. Nassif quickly put Mind Spring in the bin, then agonized before ditching Mind Control. Worse, Nassif had no third land and had to pass the turn. Mann's Bloodbraid Elf got Sprouting Thrinax, but Essence Scatter and a main-phase Celestial Purge sent them both packing.

Mann piled on the pain with a kicked Goblin Ruinblaster to put Nassif further behind. Nassif's deck was kind enough to give him another Glacial Fortress, and a turn later he had an Everflowing Chalice for one, but Maelstrom Pulse wrecked that plan. Then came a second Ruinblaster, along with Raging Ravine, and the deal was done.

Nassif kicked off with Kor Firewalker and Treasure Hunt, finding only Mind Control. Mann answered with Sprouting Thrinax, but Nassif had another Firewalker. Mind Rot made him pause. He had only a single blue mana source on the board, and chose not to Negate, instead discarding Jace, the Mind Sculptor and Mind Spring. Mann had no fourth land. 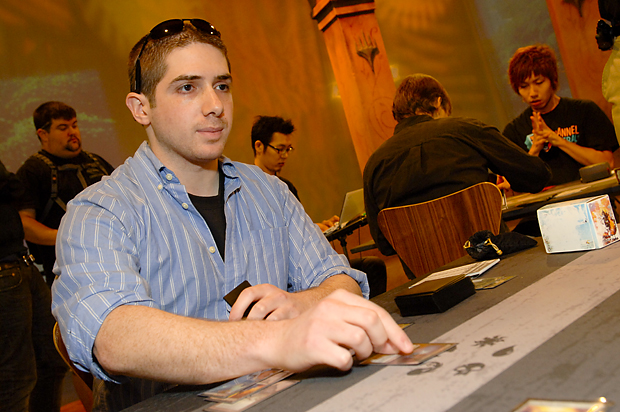 Corey Mann keeps the pressure on.

Nassif untapped and ripped a Glacial Fortress, and brought the Thrinax over to his team with Mind Control. But one good rip deserves another, and Mann plucked the land he needed for Bloodbraid Elf. The good news kept coming, as he spun into Maelstrom Pulse for the two Firewalkers. Nassif attacked for 3 with his Thrinax and Mann fell to 8.

Mann dropped another Bloodbraid, this time flipping up Sprouting Thrinax, but Nassif had Flashfreeze for the latter. Here, Mann got reckless: He swung in for 6 with his Elves. This gave Nassif a clear path for another 3 damage, bringing Mann down to 5.