n the last 45 individual Pro tours, the 45 winners have all won their first rounds. Luis Scott-Vargas accomplished just that in Berlin in 2008, while his opponent, renowned deck builder and Hall of Famer Alan Comer, has yet to contribute to that particular statistic.

"So you're 2-0 already," Comer laughed to Scott-Vargas. "It's been a long time since I was in a tournament and started 2-0."

"I've actually Top 8ed a Pro Tour after losing the first round," Comer replied after a bit of thought. "Ironically, I lost in the first round of the Top 8, too." 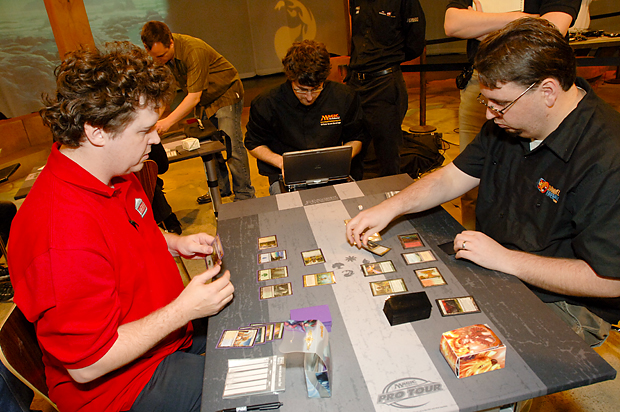 Lacking a randomization method, they asked me to ninja some dice away from Shuhei Nakamura, who was playing behind me. Resorting to the oft-used ninja tactic of asking nicely, I handed them a pair of dice that Comer really seemed to take a shine to after seeing Scott-Vargas's roll.

One second, one roll, and one pip less later, and Comer had reevaluated things.

Scott-Vargas and Comer both started the game with a mana-generating creature, prompting Comer to remark, "Mana creatures? Who would have thought of that?"

"Unfortunately, I'm afraid your mana creature won't be alive for much longer," Scott-Vargas said as he aimed a Lightning Bolt at comer's Birds of Paradise. When Comer tried to replace it with another, an Ajani Vengeant from Scott-Vargas took it away. Undaunted, Comer dropped a third one-mana creature, this time a Noble Hierarch. This one stuck, though Scott-Vargas did keep his mana down by locking a Forest down with Ajani. He also added a Knight of the Reliquary to his board, putting him way ahead.

Comer added a real threat to the board with a Rhox War Monk, but he was facing a slightly larger board from Scott-Vargas. Things got even bigger when Scott-Vargas used a Tectonic Edge to kill Comer's Celestial Colonnade. 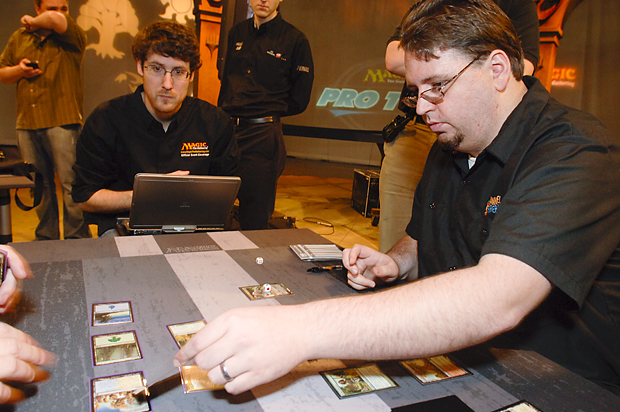 And boom goes the dynamite.

Scott-Vargas fired up his Raging Ravine and sent it and his other animals into the Red Zone. Comer dropped to 9.

"I need some life," Comer said bluntly as he dropped a Finest Hour into play. This let him send his Rhox War Monk over twice to drop Scott-Vargas to 15 and raise himself up to 17. With Ajani Vengeant on the other side, The Monk was quickly locked down, leaving Comer with no creatures save the ones that were currently lands.

Scott-Vargas already had a boardful of creatures, and a Ranger of Eos recruited him a pair of Wild Nacatls. When they attacked on the next turn into a virtually empty board, Comer looked at the fistful of cards Scott-Vargas had in reserve and packed it in.

When both players mulliganned, it sparked Comer, who famously created the Miracle-Gro deck featuring an improbable ten lands, to remark, "That's what happens when I play more than twenty lands—I don't draw any." 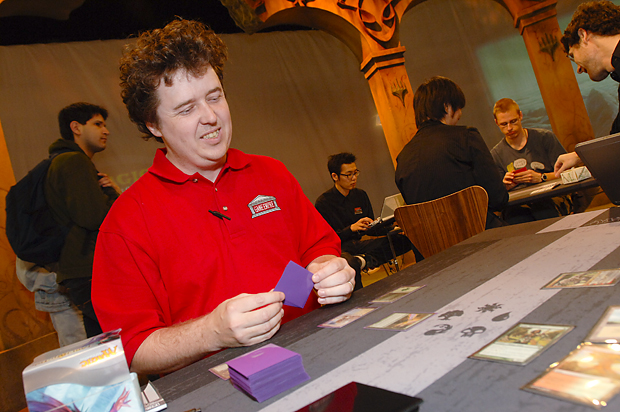 The always-affable Comer weighs his options.

This game began with Comer landing a second-turn Noble Hierarch that defied the odds and lived to attack Scott-Vargas for 1. A Knight of the Reliquary came down to bar the way, so Comer just upped the ante with a Rafiq of the Many. Ajani Vengeant came down and promptly dealt with the problematic legend. True to form, Comer just added an even bigger monster to combat the roadblock, but, true to form himself, Scott-Vargas had a Path to Exile to remove Comer's Baneslayer Angel. In addition, Scott-Vargas made a Bloodbraid Elf, which cascaded into a Cunning Sparkmage, which immediately ate the Noble Hierarch. On the following turn, the Sparkmage picked up a Basilisk Collar, allowing it to kill Comer's freshly cast Rafiq, and he was left defenseless as Scott-Vargas smashed over for the win.