Pro Tour–San Diego Round 4: The Rise of Cobra

evel 7 Pro Player Gaudenis Vidugiris had a great 2009, with impressive Grand Prix and Pro Tour finishes including a Finals appearance in Hannover and a win in Tampa. He settled on playing the popular Bant deck for this event.

Across from him, 2005 World Champion and 2006 Japan National Champion Katsuhiro Mori did not have as stellar a 2009 due to taking a break for a year. He's back this season and has decided to play Open the Vault / Time Sieve combo this weekend. 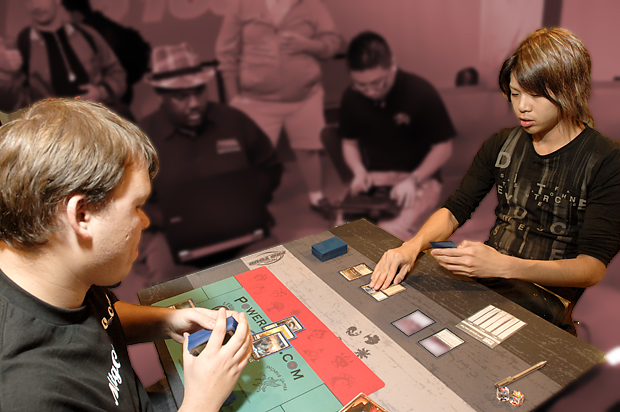 Mori won the die roll and played first. Sometimes turn one takes a bit ... and after some thought, Mistvein Borderpost hit the battlefield, followed by a turn-two Kaleidostone for Mori. Vidugiris's turn-two play was the lovable Zendikar mythic rare Lotus Cobra. Mori started his draw engine with turn-three Howling Mine, while Vidugiris powered out a turn-three Baneslayer Angel thanks to Misty Rainforest and that Lotus Cobra, which showed that it's no Birds of Paradise by getting in for 2 as well.

Vidugiris cast a second Lotus Cobra and showed Mori how much he loves mana with a played and activated Verdant Catacombs. Down came Finest Hour and Noble Hierarch. This would have been a crippling attack if it hadn't been for Mori's Angelsong. The next turn, or should I say next turns, involved Mori playing Time Warp, laying a Howling Mine, casting and activating Time Sieve, cycling Glassdusk Hulk, casting Open the Vaults, activating Time Sieve again, casting Howling Mine, attacking with Glassdust Hulk, casting Time Warp, attacking with Glassdust Hulk, casting Time Warp .... I think you get the idea. Vidugiris did too, and we were on to the next game.

The players kicked things off with turn-two plays, a Lotus Cobra from Vidugiris followed by a Howling Mine from Mori. Vidugiris thought a bit as to how to best utilize the extra mana he would be getting from the Cobra's landfall trigger and decided on Misty Rainforest into Knight of the Reliquary. An attack from Lotus Cobra and an activated Marsh Flats from Mori brought his life down to 17. Mori seemed unfazed by the amount of mana Vidugiris would be able to produce next turn and attempted a second Howling Mine. It was met by Negate. 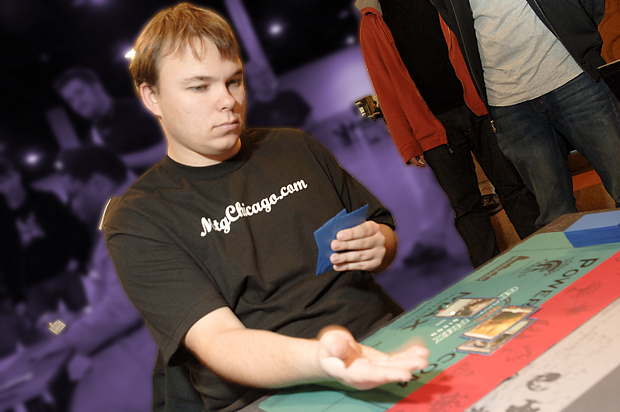 Vidugiris started to do some math ... Lotus Cobra and Knight of the Reliquary should be able to power out something amazing. Admonition Angel, anyone? Check. An activated Verdant Catacombs then fetched a Forest, allowing Vidugiris's Admonition Angel to exile Mori's Howling Mine. Knight and Cobra attacked Mori down to 14.

Mori had nothing more than a land drop and a Kaleidostone on his turn, and Vidugiris kept the pressure on with Celestial Colonnade followed by Rafiq of the Many. In went a 7/7 flying, double strike angel, but Mori had an Angelsong. Mori played Mistveil Borderpost then land and passed the turn. Vidugiris tried the 7/7 double strike Angel plan again. A second Angelsong preserved Mori's life at 14. Vidugiris began to use Knight of the Reliquary activations to wreak havoc on Mori's artifacts in conjunction with Adomination Angel's landfall ability while in turn powering out Thornling, thanks to Lotus Cobra. The synergies of Vidugiris's draw this game proved too much for Mori's board of six land and a Kaleidostone, and we were on to Game 3.

We had our first mulligan of the match as Vidugiris threw back his seven for a more favorable six. Vidugiris cast the first spell, turn-one Noble Hierarch, and Mori followed with a turn-two Howling Mine. Vidugiris drew from the Mine, then destroyed it with Bant Charm.

When Mori passed again, Vidugiris attempted to bring out the legendary muscle in the form of Rafiq the Many, but a Flashfreeze from Mori denied this plan. Mori cast two Kaleidostones the following turn, searching for a more permanent draw engine. This left the gates wide open for Vidugiris to land a Knight of Reliquary. Mori still had nothing but mana on his turn, with a Borderpost followed by a land.

Vidugiris was determined to make short work of this game with Finest Hour hitting the battlefield. Two attacks from the knight and four exalted triggers brought Mori down to 7 and left him little time to find an answer. He drew his card, then another off of a Kaleidostone, and passed with two mana open—chances were good there would be an Angelsong in the near future. Vidugiris attacked with Knight of the Reliquary, and sure enough, there was the Angelsong. Vidugiris added Rhox War Monk to the party and passed. 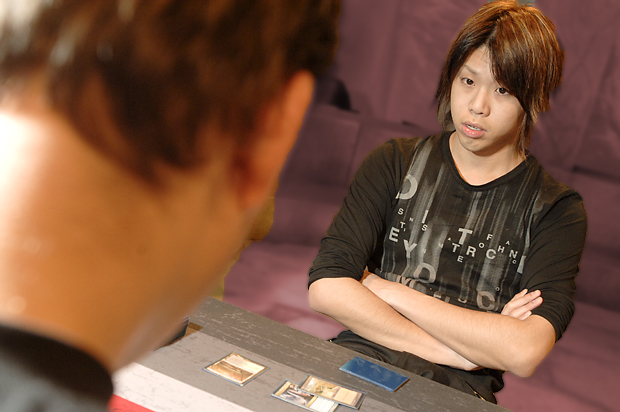 Mori's shirt doubles as an eyechart.

Mori needed to do something, and fast. He tapped five mana and cast Time Warp, then another Time Warp on his next turn. On his third turn in a row, Mori played a land and passed with two mana open. That two mana was reserved for Angelsong for Vidugiris's next would-be lethal attack. Mori had lived another turn, but would it be enough?

It looked like it might be, as Mori, on his next turn, tapped four mana and cast Day of Judgment. Ouch. Vidugiris looked at his board to see if there were any dying wishes he had from his permanents. Knight of the Reliquary searched up a Stirring Wildwood before heading to the graveyard with the rest of Vidugiris's creatures. It's good for Vidugiris, or bad for Mori, that Day of Judgment doesn't remove the Finest Hour on Vidugiris's side of the battlefield. Stirring Wildwood would be lethal with two attacks and two exalted triggers. Did Mori have the Angelsong? No, sir.

Vidugiris moves on to 4-0 and drops Mori down to 3-1 as we move into the final round of Standard today.

3 Architects of Will 2 Day of Judgment

3 Sphinx of the Steel Wind
60 Cards