he Round 5 feature match saw action between two Americans: superstar Luis Scott-Vargas and Grand Prix standout Gaudenis Vidugiris. Scott-Vargas, a California resident, qualified for the event through his Level 8 standing in the Pro Player's club. Vidugiris qualified in the same way, just behind Scott-Vargas with a Level 7 standing.

Vidugiris earned the right to play first, and both competitors led on the same brand-new Worldwake dual land: Stirring Wildwood. Lotus Cobra on Gaudenis's third turn allowed him to potentially accelerate his mana, but he missed his third land drop and was forced to pass after casting the 2/1. Luis put an end to the Snake with a Lightning Bolt, then had Bloodbraid Elf revealing Birds of Paradise to attack Vidugiris to 16. 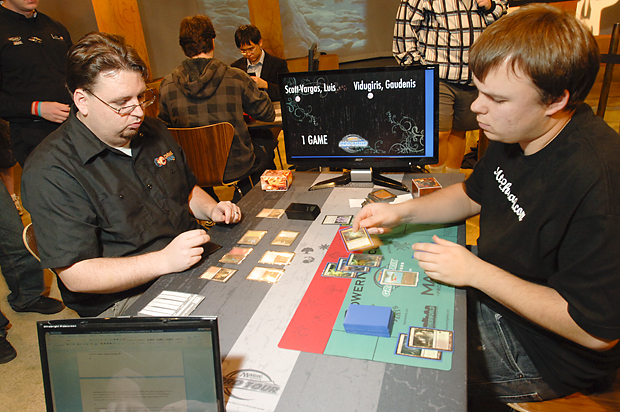 An all-American match plays out in the arena.

Knight of the Reliquary for Gaudenis tried to help him stabilize, hitting the battlefield as a 3/3 thanks to an early-game Verdant Catacombs. Sadly, it needed 1 more point of toughness to survive the Lightning Bolt Luis had for it, and after the burn spell he was able to attack Gaudenis to 13 with his Bloodbraid Elf. The Pro Tour–Berlin champ added to his team with a Knight of the Reliquary of his own post-combat.

Gaudenis finally found a third land, but it wasn't much to help him keep up with his opponent. Luis cast a second Bloodbraid Elf, picking up a free Noble Hierarch, then attacked his opponent to 7. Gaudenis's Bant deck needed a lot of help very quickly to stay in the first game of the match. He went to the top of his deck for a miracle. Rhox War Monk was what he found, and the 3/4 with lifelink was as good a bet as any to help him stabilize.

Instead, Luis had Oblivion Ring to axe the blocker, and an activated creature land joined his team to attack for more than lethal. Gaudenis Vidugiris nodded his head and scooped up his meager array of cards from the board.

Both players had early mana accelerants for the second game: Birds of Paradise for Gaudenis while Luis Scott-Vargas kicked things off with Noble Hierarch. Rhox War Monk was the turn-two play Gaudenis powered out, while Luis had an Oblivion Ring for the creature. At four mana, Vidugiris didn't have anything and meekly passed the turn.

Worldwake's Stoneforge Mystic was the play for Luis's third turn, fetching up a Basilisk Collar. The Mystic had been seeing a surprising amount of play on the weekend as a standout from the new set. It was also very well designed for large creature deck match-ups like Zoo versus Bant. The Collar didn't last long, however, as Gaudenis immediately used Bant Charm to destroy it before casting a second Birds of Paradise.

The mana producers were great at producing mana, but not so great at blocking. Neither was willing to make the sacrifice to stand in front of Luis Scott-Vargas's Stoneforge Mystic, which was pumped to 2/3 with some help from Noble Hierarch as it rumbled to the red zone. Gaudenis got a slight reprieve as his opponent had no post-combat action, instead passing the turn. 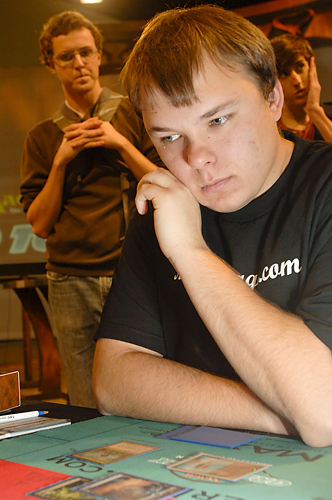 Vidiguris found a Celestial Colonnade he was able to play, but rather than use it for attacking the following turn he was able to get a second white from it to join a Birds of Paradise in casting Baneslayer Angel. The 5/5 was quickly dispatched with an Oblivion Ring from Luis, who found a second Basilisk Collar he was able to equip to his Mystic, turning the creature sideways and putting the score at 19-11 in his favor.

Feeling backed into a corner for the second game of the match, Gaudenis decided to finally attack with his Colonnade. Because the creature land had vigilance, he was even able to use it for blocking or tapping for mana post-combat. His opponent didn't seem to mind, simply getting in with his Stoneforge Mystic wearing the Basilisk Collar. Trying to find a way to block the obnoxious white weenie, Gaudenis used Bant Charm to blow up the Equipment, then activated his Colonnade to step in front. Instead, Luis used Path to Exile to send the land away, dropping his opponent to 7.

Knight of the Reliquary hit the table for Gaudenis, but each time he jabbed, Luis was able to parry. He answered the smallish Knight with a Bloodbraid Elf, flipping up a free Noble Hierarch. The 0/1 was his second copy, meaning his Elf became a 5/4 when it headed to the red zone. Vidugiris decided it was time to start sacrificing Birds, putting one in front of the Elf.

A third copy of Noble Hierarch would make the Bloodbraid Elf a 6/5 on the next combat step, stats so large even an untapped, summoning-sickless Knight of the Reliquary struggled to tangle profitably with it. Luis, however, had a better plan: attacking with his flying Birds of Paradise instead. The innocuous 0/1 became a more threatening 3/4, punching through to put Vidugiris down to just 4 life. He used his Knight to fetch up a Celestial Colonnade, hoping to buy himself the time to kill the Birds and survive to draw some action.

The vigilance of the Colonnade proved its use for the second time in the match, allowing Gaudenis to attack into his opponent's board of creatures while still having a monstrous flying blocker in reserve if he needed it. Luis found a Raging Ravine that might cause some problems for his opponent, becoming as large as 7/7 on its first attack thanks to the triplicate copies of Noble Hierarch on his side of the table.

Gaudenis's creature lands were starting to make up a lot of ground for the up-to-that-point struggling American. In almost no time he found himself battling back from a deficit of 16-4 to a deficit of 7-4—much more reasonable than just a few turns prior! The Raging Ravine was activated by Luis, then activated again, then activated a third time. By activating the land so many times, Luis gave it multiple instances of the +1/+1 counter trigger for attacking. This meant when he sent the land to the red zone, it turned into a 6/6, then because it was also pumped by three Noble Hierarchs, it became a 9/9. After trying to figure out his opponent's plan, tapping out to attack with a creature he could simply chump-block, Gaudenis decided to do just that.

Having nullified the attack, Gaudenis calculated whether he could attack for lethal or not. He activated a Celestial Colonnade for four mana, then cranked some more numbers in his head. Using a Knight of the Reliquary, he found the spare mana he needed and used four of them to cast Rafiq of the Many. That was a monstrous enough threat to double the damage from the Colonnade, killing Luis with an attack.

Somehow Gaudenis Vidugiris had managed to come back from a game that was going poorly for him to even up a tough matchup. He had gotten some help by a mana flood from Luis in the late game, but considering his own poor draw in the first game, it all seemed to balance out, kharmically. It was down to the final bout to determine who would walk away the victor in the match.

Luis got off to an early lead in mana using his first-turn Forest to cast Noble Hierarch. His opponent had but a dual that entered the battlefield tapped, Stirring Wildwood, and Luis spent his second turn on a Stoneforge Mystic that fetched up a Behemoth Sledge. 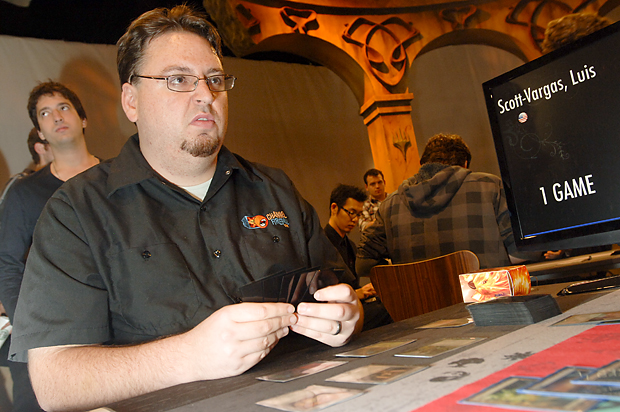 Scott-Vargas is still at the top of his game.

Gaudenis build up his mana base to cast Knight of the Reliquary while Luis found a Basilisk Collar. The Equipment was huge, allowing him to cast Cunning Sparkmage, equip the Collar, and immediately kill his opponent's Knight. Thanks to the deathtouch from the equipment, the toughness of the Knight was irrelevant!

A Tectonic Edge further increased Gaudenis's woes, taking out his only source of non-green mana in Stirring Wildwood. That left him with just three Forests, and as Luis cast a Knight of the Reliquary of his own, the match was looking to be out of reach of Vidugiris. Ranger of Eos from Vargas found Wild Nacatl and Scute Mob, and it took only a single additional draw step for Gaudenis to extend his hand.

After the match, Luis leaned over to give a shout-out to his friend Mashi Scanlan, whom he met at Superstars Game Center. The store is where Luis plays in tournaments ranging from Friday Night Magic to Grand Prix Trials, and even some with large cash prizes.

"Ask him why he's not here this weekend!" Scott-Vargas said with a smile.