Pro Tour–San Diego Round 6: King of the Hill 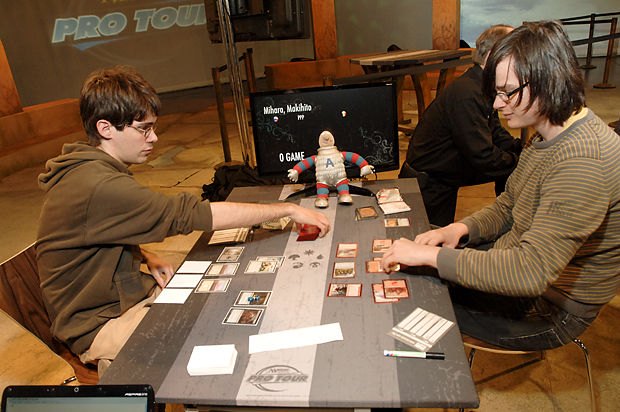 Lybaert had a very quick start, leading with an Expedition Map and playing a Hedron Scrabbler and Goblin Ruinblaster on turns two and three, letting him attack for four. Meanwhile, Adam built for the future with a turn one Soul Stair Expedition and turn two Kitesail. It was the third turn before he got his first creature out, and it was a humble Steppe Lynx. Lybaert kept up the assault, adding a Skitter of Lizards (kicked twice to become a 3/3) and a Highland Berserker to his assault.

Then Lybaert made sure: he used the Expedition Map to add Valakut, the Molten Pinnacle to his suite of threats. Adam's back was against the wall. Figuratively, that is. The arena is actually very spacious. What we mean is that he was in danger of losing the game. Koska summoned a Jagwasp Swarm to hold back the onslaught. And because it's good to have a backup plan, he also cast a Quest for the Gravelord in preparation for the time when his creatures would die horribly while protecting him.

Indeed, when Lybaert attacked on the next turn, Koska's Lynx and Swarm took the brunt of the damage. They took the Highland Berserker with them, which meant that the Quest for the Gravelord was successful. Koska's new 5/5 Zombie Giant, however. The Soul Stair Expedition also helped out, giving Koska back his dead creatures. Unfortunately, it still clearly wasn't going to be enough, and Koska conceded.

Having lost the previous match, Koska was free to go first. This he did, with a Vampire Lacerator on turn one and a Fledgling Griffin on turn two. Lybaert had only played a Hedron Scrabbler by the time Koska was attacking him down to 14 on turn three. Koska also put out a Quest for the Gravelord, but this didn't protect him from Lybaert's third-turn Goblin Ruinblaster, which, in combination with his own Vampire Lacerator, knocked Koska down to 12. He had Kor Sanctifiers for the Hedron Scrabbler and kept up the attacks. 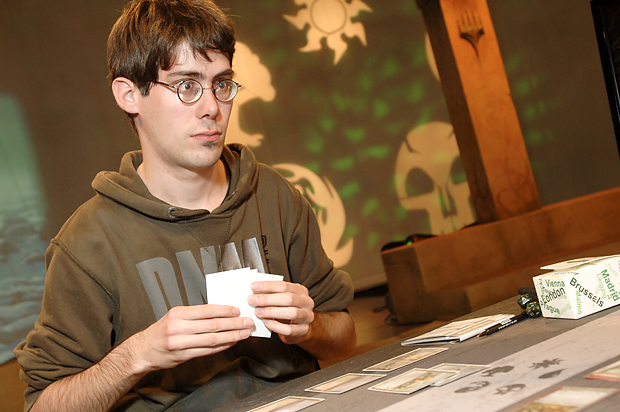 Koska scrabbles to keep up.

Lybaert showed that he still had a few tricks up his sleeve and removed the Kor Sanctifiers from the equation with an Inferno Trap. But Koska had done enough early damage that his Vampire Lacerator no longer damaged its controller, and once he attacked Lybaert down to six life, he added a Vampire Nighthawk to his army. Lybaert got to his fifth Mountain and cast a Tuktuk Grunts in the hope of stemming the tide.

Then Koska played Sejiri Steppe. And it turns out that while a mono-red deck has pretty good consistency, it has problems when the other side suddenly gives its Vampire Lacerator protection from red while simultaneously giving its Fledgling Griffin flying for the turn. The Vampire Nighthawk, meanwhile, didn't need its lifelink or deathtouch, since the important keyword in this situation was "flying." The 6 points of unblockable damage was precisely what Koska needed, and Lybaert lost the game.

As they shuffled for the next game, Lybaert commented, "I would have won that game on the play." To this reporter's ears, Koska's "Really?" sounded a little skeptical.

Koska considered his opening hand for a long time before trading it in for six cards. As he was shuffling for a second time, the public events area erupted in an announcement for Super Friday Night Magic, which is just one of the many events at a Pro Tour which are designed for non-Pro players. It's as if all the Friday Night Magics in the city combined into one enormous whirlwind of Magic. on Friday Night.

Lybaert led with Mountains and a Highland Berserker, while Koska countered with a Kabira Crossroads, a Swamp, and a Hammer of Ruin. Then Lybaert decided he'd had enough of the planning phase and went ahead and attacked before adding a Molten Ravager to the mix. Koska's turn was a disappointingly simple "Plains. Go."

Koska played his Vampire Lacerator and gave it the Hammer of Ruin. Lybaert traded in his Expedition Map to put Valakut, the Molten Pinnacle into his hand. At this point, he had four Mountains in play. On his turn, Lybaert played a fifth Mountain, then attacked. Koska declined to block, and Lybaert pumped all five of his available mana into the Molten Ravager, putting Koska's life total at 14, which promptly dipped to 13 thanks to the Vampire Lacerator. 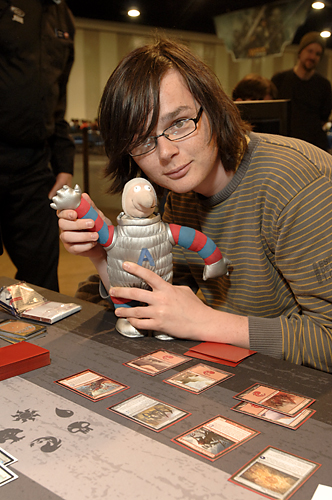 And there's a creepy doll / That always follow you.

On his turn, Koska attacked, putting the defenseless Lybaert at 16, and cast a Guul Draz Vampire. Lybaert's turn went the same as before: Attack with the Molten Ravager, Koska doesn't block, pump five mana. Then he played Valakut, the Molten Pinnacle before passing the turn and letting Koska's Vampire Lacerator put him at 7 life.

Koska knew he was in a bad spot. He considered the situation, commenting, "Okay. Guess I die to pretty much anything. Including a Mountain."

He shrugged and went for it, casting Windborne Charge and attacking with both creatures. Lybaert flashed a hand full of bad news for Koska, and Koska conceded.