elgium's Dennis Stone might be relatively new to the Pro Tour, but he's made the most of it. Debuting at Austin, he went on to finish 42nd at Worlds in Rome. Already off to a 6-0 start here in San Diego, Stone has his sights set on a Sunday berth. 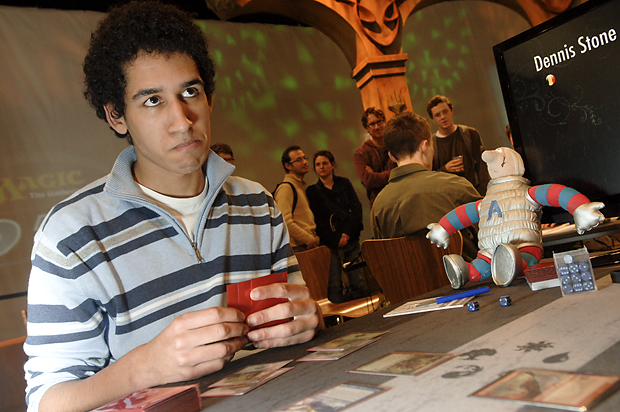 Dennis Stone is a rookie to watch, aaaaaaand there's that creepy doll again.

Sitting opposite him was Gabriel Nassif, who, despite the table judge's insistence, is not yet in the Hall of Fame. Sporting his trademark yellow hat that he first wore to 2nd place at the Teams Pro Tour in New York 2001.

Stone got on the board early with Frontier Guide and Horizon Drake while Nassif played Valakut, the Molten Pinnacle and then a Blazing Torch. Nassif played a Goblin Roughrider and passed it back to Stone, who augmented his air force with Windrider Eel.

Nassif drew and thought hard, stuck on three land. Eventually he sent his Roughrider to the red zone and dispatched the Eel with Punishing Fire. The tapped Roughrider picked up the Torch. Stone swung for 3 more in the air, taking Nassif to 12, but had no follow-up. Still with just three land, Nassif had to content himself with a Molten Ravager. 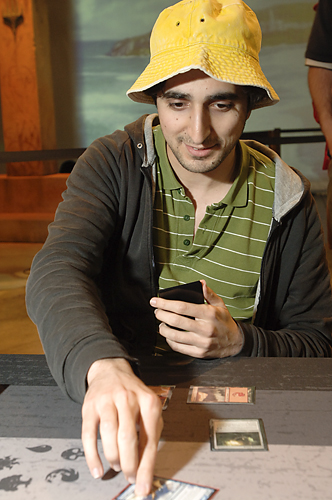 The doll is creepy, but Gabriel Nassif's famous yellow hat may prove to be an artifact of greater power.Stone flew in for another 3. He Explored for the card and cast a Calcite Snapper. Nassif's Molten Ravager picked up the Torch. Stone played a land and drew three with Mysteries of the Deep, and Nassif threw his Torch at the incoming Drake. Land was still not forthcoming. He cast Zektar Shrine Expedition and waited behind his Molten Ravager.

Stone upped the ante with a Shoal Serpent, then Nassif's deck finally took pity on him and served up a Mountain. It was a big one, enabling a Chain Reaction for 5, clearing the board. Stone was unfazed. He untapped and cast Living Tsunami, but Nassif had Magma Rift to shut that down immediately.

Things continued to flow Nassif's way. Stone had no play and Nassif drew a land to replace the one he threw at the Tsunami. He played out a pair of Highland Berserkers. Stone reasserted himself with a Sky Ruin Drake off the top, along with a Khalni Garden. Another land for Nassif turned on his Zektar Shrine Expedition and he sent Stone 7 damage. He also had Grotag Thrasher to keep that pesky Drake from getting in the way of things.

Stone plucked a Territorial Baloth. Nassif gamely swung in with the Grotag Thrasher, panicking the Baloth. Stone put the Drake in front of it, and Nassif finished it off with a kicked Torch Slinger, as well as a sixth land. The next mountain would trigger Valakut, the Molten Pinnacle.

Stone played a land and swung for 6, but Nassif's Highland Berserker was happy to die for the cause. He played Oran-Rief Recluse and passed it back. Nassif untapped and swung all out, putting the Oran-Rief Recluse on hold. The plant chumped the Thrasher, and Stone was at 6. A Mountain from Nassif made it 3. He played the last card in his hand, a Hedron Rover.

Stone hit again with his Baloth and this time Rover took the hit. He shrugged and tapped two for Treasure Hunt. Land ... Merfolk Seastalkers! With his ample mana he could lock down Nassif's team and swing for lethal on the following turn.

Nassif pulled his top card, and showed it: Mountain.

Stone took an aggressive stance for the second game, leading out with Wind Zendikon and sending it on turns two and three. Nassif meanwhile had made Zektar Shrine Expedition. Stone accelerated on his third turn with Explore, and when Nassif made no play on turn three, scored 6 power of creatures with Bestial Menace.

Nassif untapped and pushed reset with Chain Reaction. Stone recouped some of that advantage with Mysteries of the Deep for three cards. Nassif played a fifth land and Grotag Thrasher. Stone answered with a threatening sequence of Harrow, Merfolk Seastalkers, and Scute Mob.

Nassif popped his Zektar Shrine Expedition and swung for 10 with the help of Grotag Thrasher. Stone declined to throw away any of his creatures. Nassif had Punishing Fire for the Scute Mob, and a Highland Berserker with a Blazing Torch attached, but Stone was free to work his Seastalkers.

Stone hit for 2 and held back on his mana. Nassif kicked Skitter of Lizards twice, and the extra attacker let him get in for 2 more, leaving Stone at 8. Stone had the ninth land in hand, though, and Nassif's team was stuck. Stone contined to play the waiting game. Nassif drew Valakut, the Molten Pinnacle, meaning his next Mountain would free him from the Merfolk Seastalkers.

Nassif drew an equally servicable Magma Rift. Stone put down the creatures he had been storing up, but one fell to the Blazing Torch and the other was stalled by the Grotag Thrasher, and in a turn Nassif had taken the match.