Pro Tour–San Diego Round 8: The Punisher

he feature match arena has become practically a second home to Gabriel Nassif during the first day of competition at Pro Tour–San Diego. By the final round of the day, he'd already been there twice. His opponent was American and renowned deck builder Patrick Chapin, who had been sitting to Nassif's right during the draft.

"Pat, do you have more Worldwake cards in your Constructed deck or your Limited deck?" Hall of Famer and Worldwake lead developer Mike Turian asked Pat from the peanut gallery while Chapin and Nassif shuffled their decks.

"My Constructed deck, and it's not even close."

Winning the coin flip and opting to play first, Gabriel Nassif opened on a Mountain. His entirely red deck promised to be a tough matchup for Chapin's mostly blue Hedron Crab strategy. He had managed to pick up three copies of the 0/2 during the draft (though he missed a fourth and a shot at Archive Trap), but they were remarkably fragile against his opponent's plethora of burn spells. 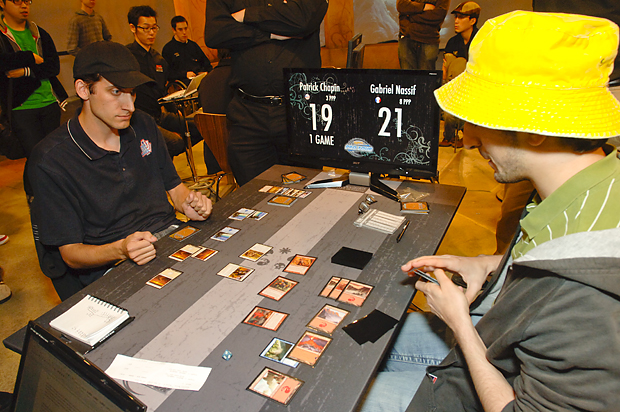 Patrick Chapin and Gabriel Nassif face off, and not for the first time—not even close.Chapin had a Crab for his first turn, but when he played a land on the second he milled a Punishing Fire from Gabe's deck.

"That's awkward ...." muttered Chapin, before casting a Sejiri Merfolk. Luckily for the American, he was missing the Plains he would need to turn on the lifelink on the 2/1 and allow his opponent to return Punishing Fire to his hand. Nassif spent his early turns dropping lands to charge a Zektar Shrine Expedition and casting a Highland Berserker. A Molten Ravager soon followed, but Chapin had managed to mill nine cards from his opponent's deck thanks to his land drops and Hedron Crab.

Eventually Nassif was able to buy back his Punishing Fire, but rather than cast it to kill the Crab, he used it on his opponent's Sejiri Merfolk. That allowed him to attack Chapin to 13, but left him tapped out from pumping his Ravager. Patrick drew for his turn, but failed to find a land and simply passed things back to his opponent. Nassif attacked with this team, but only pumped his Molten Ravager three times. That forced an Into the Roil from Chapin to bounce the 0/4, but because Gabe had seen the play coming, he was ready to re-cast with three mana left over.

With his opponent tapped out for the second turn in a row, Chapin played a Sejiri Refuge, gaining a life and milling three. The mill revealed a second copy of Punishing Fire from his opponent.

"Yeah, I got them both in the second pack," Nassif explained.

The lands finally started flowing for Pat Chapin, who was making short work of his opponent's library. If he could carefully manage his life total, he might have enough tricks to finish the job. The question was whether or not Nassif would find a burn spell to deal with the Crab. He sent his Molten Ravager and Highland Berserker to the red zone, but after pumping the Ravager a Whiplash Trap reset the two creatures. Chapin would have yet another turn to continue milling his opponent! Nassif, starting to get worried about the size of his library, did a quick count of the cards.

Finally the French player found a solution to the Crab: Chain Reaction. Because Chapin had tapped out to cast World Queller, he had no choice but to allow the play, losing his Crab but trading for Nassif's board with his Queller. It was a tight game, with Nassif down to just six cards in his library and Chapin down to just 10 life.

Crusher Zendikon from Nassif met a Cancel from Chapin, who promptly topdecked a second Hedron Crab the following turn, dropping a land after casting it. He also had a Shepherd of the Lost in the same turn, and Nassif was down to two cards left after his draw step. His only hope was to somehow resolve a gigantic Spire Barrage, but Chapin had used Spreading Seas to turn one of his opponent's Mountains into an Island, preventing the spell from being lethal by exactly 1 point. The American went tit for tat for exactly the remaining threats Nassif had, and miraculously Chapin found himself up a game thanks to a Crabbed library on Nassif's side of the table!

There was no early Hedron Crab for Patrick Chapin to start the second game of the match. Then again, Gabriel Nassif didn't exactly come flying out of the gates either. He spent his early turns using Expedition Map to find Valakut, the Molten Pinnacle and trying to crank up a Zektar Shrine Expedition so he could start attacking. A Molten Ravager joined Nassif's team to help with attacking, but only after Chapin had finally found a Crab with which he milled three cards, one of which was Punishing Fire. 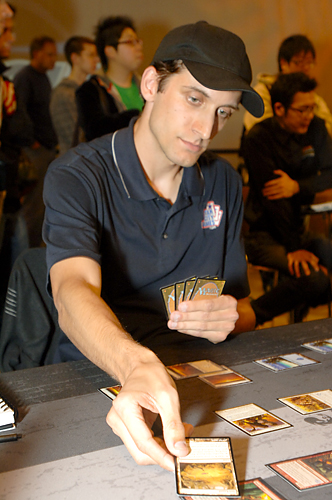 Chapin drafted a white-blue control build featuring three Hedron Crabs and ... is that a Caravan Hurda?

Blazing Torch from Nassif promised to end the Crab's shenanigans, but not before Chapin got another three cards milled from it. He was also able to cast Pilgrim's Eye to make sure the lands were going to keep flowing if Nassif didn't deal with the Crab. He didn't even need the Torch, however, pulling the trigger on Chain Reaction to wipe his opponent's board, leaving him with a Zektar Shrine on two counters and a Molten Ravager.

World Queller was the next hit for Patrick, a solid plan B in case his Crabbing didn't work out. A combination of burn and Blazing Torch dealt with the 4/4, but Nassif was starting to miss land drops. Shepherd of the Lost from Patrick plus a Quicksand for good measure meant he was going to be able to keep Nassif's creatures under control, at least for a time. A Caravan Hurda contributed to holding the fort down, but Gabe finally picked up a fifth land and was able to Spire Barrage his opponent's Shepherd.

With the Barrage leaving Nassif tapped out, Chapin actually sent his Caravan Hurda to the red zone to gain a life. He had a post-combat Fledgling Griffin, but Nassif stole the point right back with a 1-point attack with Molten Ravager, then a post-combat Grotag Thrasher. All that action left him tapped out, and he again saw an attack from Caravan Hurda net Chapin a life. At 21-16, it looked like the mono-red deck might actually lose the damage race to Chapin's Crab deck!

A Spreading Seas from Chapin shut down his opponent's Valakut, the Mountain Pinnacle one turn before Gabe could start Lightning Bolting each time he dropped a Mountain. Gabe worked on attacking through his opponent's blockers, but Pat didn't let up, dropping a fat Sky Ruin Drake to the table to assist on D. The Drake found itself on the wrong end of a Magma Rift, and Nassif worked his way in for a fully-pumped attack from Molten Ravager that put Chapin at 4 life. Unwilling to risk his opponent buying back Punishing Fire, Patrick had refused to block with his Caravan Hurda, instead attacking with it on his own turn to gain 1 after Gabriel tapped out.

The next turn Nassif attacked again, but was blanked by a Whiplash Trap. He recast Grotag Thrasher, but watched as his opponent incremented up to 6 life with his Hurda attacking again. That wasn't enough, however, as Nassif managed a Trusty Machete and a land to activate his Zektar Shrine Expedition. With the Grotag, it was enough to swing for lethal and Chapin, depite being completely untapped and holding a mitt full of cards, was unable to stop the onslaught.

"So you're going to play first?" Nassif asked his opponent as they readied for the third game.

"No," Chapin replied immediately. "Your deck isn't fast enough to merit playing first, and I'd rather have the extra cards." 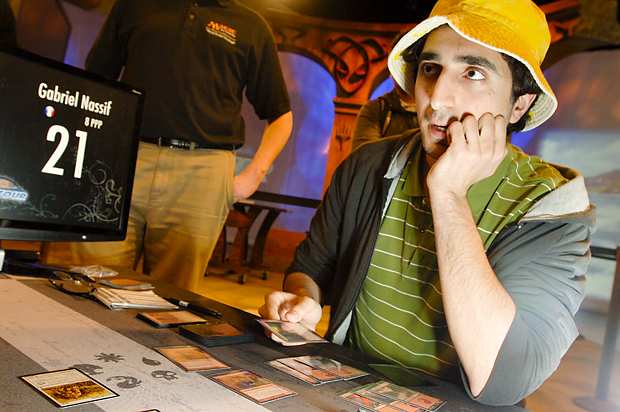 Gabriel Nassif's mono-red deck can hand out a lot of punishment.

No sooner had he said the words, it seemed, than Chapin was putting his foot in the mouth. Double Highland Berserker and Cosi's Ravager with a Valakut, the Molten Pinnacle made short work of Pat in five turns. Hindering the American was the fact his hand held only Plains. He had kept a greedy hand with double Crab, but needed to hit an Island to start milling. When it didn't come, he found himself quickly booted from a match that had seemed reasonable in the two previous games.

After the match, Brian Kowal, Brian Kibler, and Gabriel Nassif all discussed Pat's decision to keep his opening hand. Their conclusion was that he should have taken a mulligan, but it was not a decision they came to quickly.