Pro Tour–San Diego Round 9: "What We Like to Call Inevitability"

o the last time I sat at the end of a feature match table between these two, there was $40,000 on the line, and it took a miracle called-shot Cruel Ultimatum from Nassif to take down Scott-Vargas's Black-White Tokens deck. With both players sitting atop the standings at undefeated here in San Diego, this round may be a preview—albeit a draft-flavored one—of another Finals battle royale to come.

Scott-Vargas wasted no time getting on the board with a 0/1 Plant token and a River Boa. The Boa picked up an Adventuring Gear before swinging into Nassif for 4. Nassif's start was a little slower, only mustering a Soul Stair Expedition and a Ruthless Cullblade in the first four turns. To add to Nassif's fairly passive start, Scott-Vargas had a Grazing Gladeheart to bump his life higher and an Arbor Elf to power out a hasty Vastwood Zendikon. At the end of Scott-Vargas's fifth turn, he had a massive board and Nassif down to 2. 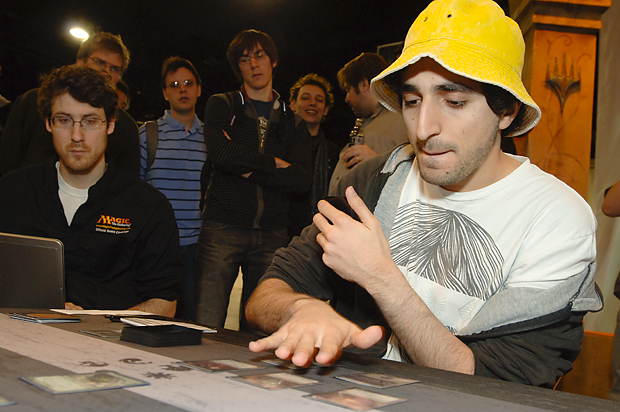 He began the arduous process of catching back up with a Blood Seeker enabling a Feast of Blood to kill Scott-Vargas's River Boa while it was unable to regenerate. Scott-Vargas just untapped and sent his team across, forcing Nassif to chump block with his only creatures and drop to two. Nassif popped his Expedition returning the creatures he had just sacrificed to play and Feasting on the Blood of the animated Forest. Unfortunately for him, Scott-Vargas wasn't out of punch yet, and an Eldrazi Monument sent his team to the skies to take the first game.

Nassif's first hand was utter garbage, and quickly went back to the deck. His second, however, required some thought. It only had one Swamp, but he had a couple of one-drop Vampires to go with a Feast of Blood and a Hideous End. After much deliberation, he decided to trust in his deck and keep it. His deck didn't provide him a land on the first turn, but he did pick it up before missing more than one land drop. Scott-Vargas's draw was a bit slower than his previous one, but he did have a Snapping Creeper to force Nassif to use his Feast.

Scott-Vargas played a Harrow before dropping an Oran-Rief Recluse into play, significantly barring the way for Nassif. He thought long and hard about just offing the Recluse with Hideous End before adding a Ruthless Cullblade to his team instead and passing the turn. When a Lodestone Golem came down for Scott-Vargas, Nassif's mana problem reared its ugly head. He couldn't kill the Golem with his Hideous End since he only had three mana, forcing his creatures to stay home. All he could do was add a Pulse Tracker to his side and pass the turn. Fortunately, his swarm of little creatures had forced Scott-Vargas to do nothing more than pass for a couple of turns, sitting on a board that contained only two creatures.

Scott-Vargas started to do some mental math before deciding just to add an Arbor Elf to his team, giving himself one more blocker should it become necessary. Unfortunately, this turned Nassif's Cullblade on and his Lacerator off, thanks to his Blood Seeker. This gave Nassif a chance to battle. He sent his Cullblade in, and Scott-Vargas sighed heavily as he traded his Golem with it. Nassif replaced it with a once-kicked Quag Vampires. A Plant token and an Eldrazi Monument came down for Scott-Vargas, but he was terribly low and facing down a swarm of creatures.

Nassif was content to just sit back and let the Monument and Blood Seeker do their jobs, and a few turns later, with no really game-breaking additions to the board, Scott-Vargas just scooped it up.

Nassif got on board first with a Pulse Tracker, but Scott-Vargas wasn't far behind with a Gnarlid Pack. Both players added 2/1s on the following turn, but Scott-Vargas's River Boa presented far more problems than the Ruthless Cullblade Nassif had made. When Luis tapped out to make a Timbermaw Larva in his mono-green deck, Nassif had a chance to get rid of the snake. Instead, he opted for the safer choice of just Hideous Ending the Larva before it could attack for 7 on the following turn. Scott-Vargas replaced it with the considerably less impressive Grappler Spider, but Nassif's men were still far too small to block. He easily remedied this by playing a 3/3 Nimana Sell-Sword and sending his smaller creatures to attack the temporarily vulnerable Scott-Vargas. The attack evened the life totals at 12.

Then came a sequence that raised both players' life totals a bit, with Scott-Vargas casting and triggering a Grazing Gladeheart, and Nassif immediately killing it with Feast of Blood. This left the game at a strange sort of parity, with Nassif being slightly ahead thanks to his two 3/3 Allies. On the following turn, he sent his Sell-Sword and Bojuka Brigand in, and the Sell-Sword traded with a Grappler Spider thanks to a little help from a regenerating River Boa. 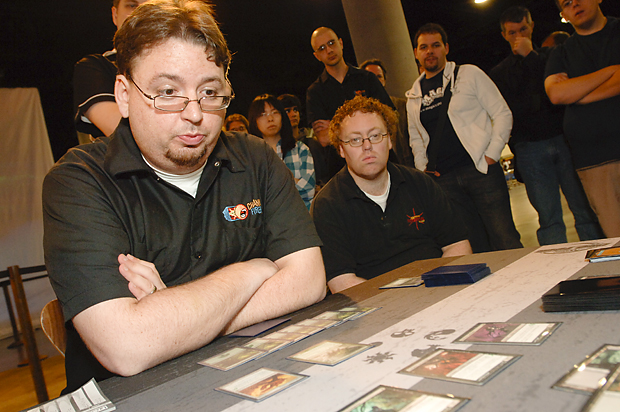 When Scott-Vargas added a Vastwood Zendikon, things swung wildly in his advantage. Fortunately, Nassif had sided in a Bog Tatters over the Razor Boomerang that was in his deck to deal with Scott-Vargas's larger creatures, and it came down to make a nice blocker. He was still able to attack with his 2/2 Gnarlid Pack, since Nassif was unlikely to be willing to trade the 4/2 he needed for the Zendikon to block it. He was willing to part, however, with his Cullblade, despite it being perilously close to turning on. A 3/3 Quag Vampires from Nassif and a 3/3 Graypelt Hunter from Scott-Vargas later, and the game was right back where it was a couple of turns ago.

Scott-Vargas made a Grazing Gladeheart and triggered its ability using his last card on the following turn, and it seemed that Nassif was going to begin to slowly taking out Scott-Vargas's biggest offenders. He still had a few cards in his hand, and the board was fairly stable. He used a Feast in Blood to kill the Zendikon, and then made a 4/4 Quag Vampires a couple of turns later. Scott-Vargas's deck provided him a Grappler Spider and some land for his Gladeheart, but nothing that would really break things open.

During each draw step, Scott-Vargas seemed a little more somber, as he was disappointed by the lack of Eldrazi Monument springing to his rescue.

"It's the last card in your deck," Nassif reassured him.

Over the next few turns, both players added creature after middling creature to the board. Neither player was able to get a stalemate-breaker, and the pace of the game approached that of molasses. Coincidentally, the Razor Boomerang sitting in Nassif's sideboard would have been perfect for this, though he would have needed to take a hit from the Zendikon before he would have been able to remove it. Scott-Vargas's Grazing Gladeheart began pumping his life total back up to a reasonable number, quickly heading upwards of twenty.

About four hundred turns later, the first game-breaker hit. Scott-Vargas drew a Timbermaw Larva sitting behind twelve Forests. Nassif played a Vampire Lacerator that immediately took one for the team and blocked the rampaging Larva. Nassif then made a pair of Allies, including Hagra Diabolist, which worked together to reduce Scott-Vargas's life to a mere 24. The Larva ate a Pilgrim's Eye on the following turn, and a Bala Ged Thief dropped Scott-Vargas to 22.

Nassif finally found an answer to the Timbermaw Larva in a Heartstabber Mosquito. At this point, with the game still stupidly gummed up, Nassif reached over to count Scott-Vargas's deck, which prompted a good laugh from the dozens of spectators huddled around the match. Scott-Vargas played a Harrow on the following turn when Nassif threw his Bog Tatters in front of his Territorial Baloth. The Harrow served the dual purpose of saving his creature and digging a few of the cards that were buffering his Eldrazi Monument. The Baloth sent in next turn, and a Groundswell ate the 4/4 Quag Vampires Nassif blocked with. Nassif didn't have anything to add to the board and just sent it back. 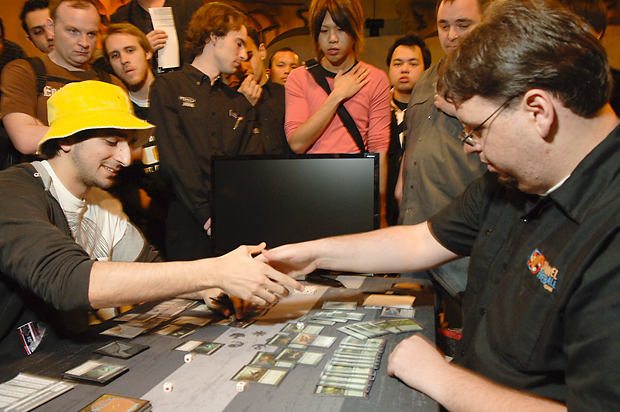 And just like that, after about twenty minutes up fast-paced, back-and-forth doing nothing and saying go, the game was over. Eldrazi Monument sent all of Scott-Vargas's creatures to the sky, and they finished Nassif off.

"It was game even if it was the last card of my deck, right&gt;" Scott-Vargas asked Nassif, getting a nod in response.

"One of these players has what we like to call 'inevitability,'" Gabe Walls added as he walked away from the peanut gallery.