Three Americans entered the Pro Tour–San Diego Top 8, and all three advanced to the Semifinals. While Luis Scott-Vargas continued his hot streak at 17-0 on the other side of the arena against German Simon Görtzen, Kyle Boggemes and Craig Wescoe squared off to determine which of them would earn the title of Pro Tour Finalist. Humorously, it was not the first time the two players had met in the Top 8 of an event, as Boggemes had once knocked out Wescoe in the single-elimination rounds of a Pro Tour Qualifier!

Wescoe’s White Weenie deck came out of the gates, guns blazing. A first-turn Steppe Lynx followed by a Kor Firewalker, then White Knight promised to pose real problems for Boggemes’s Jund list. He cast Sprouting Thrinax on his third turn to try to stabilize, but the creature gave his opponent 1 life from the Firewalker and could only block the Steppe Lynx thanks to a lot of “protection from color” abilities out of Craig’s creatures. 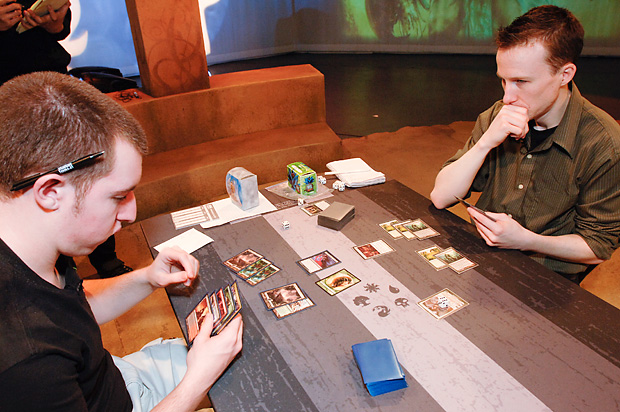 Kyle Boggemes and Craig Wescoe ponder their next move.

Oblivion Ring from the White Weenie deck dispatched the Thrinax, allowing Craig to drop his opponent to a lowly 6 life. Boggemes cast Garruk Wildspeaker and made a Beast token, but it was far from enough. Craig showed his opponent a Path to Exile from his hand for the Beast, then revealed Kor Skyfisher. “I’m going to return a land,” he said, motioning to his soon-to-be 2/3 Steppe Lynx with the Skyfisher from his hand. Tapped out, Kyle knew that would be exactly lethal and conceded the first game.

Between games the two Rust Belt players chatted amicably with one another. With Boggemes hailing from Michigan and Wescoe from nearby Ohio, the two players have occasionally shared PTQs and hometown GPs with one another. That kept the atmosphere of their match friendly, though neither seemed to forget for a second the gravity of the games they were playing. One single misstep could be the difference between a Pro Tour title and a Semifinals exit.

The second game got underway with Boggemes going first. He simply played lands over the first two turns, while his opponent cast a Kor Firewalker with two Plains. Kyle reached three mana, but surprisingly had no spells to cast, instead passing to his opponent. If the young Boggemes was going to keep his Semifinals hopes alive, he’d assuredly have to offer up more active resistance than lands and saying go!

Stoneforge Mystic from Wescoe fetched up a Sigil of Distinction. The powerful Worldwake rare had seen quite a bit of action on the weekend, fetching up all kinds of swords, collars, and sigils for a number of archetypes. Wescoe would soon be able to cast his Sigil for as much as four, making it even harder for his opponent to kill many of the White Weenie player’s creatures. Kyle finally started playing ball, dropping Garruk Wildspeaker and using the planeswalker to conjure up a Beast.

Instead of Sigil, Craig Wescoe cast a planeswalker of his own: Elspeth, Knight-Errant. She jumped his Firewalker to 5/5, flying, and he used his member of the Kor to knock out the Garruk. Kyle fought back, sending his Beast at his opponent’s planeswalker, but Elspeth was protected by a sacrificial block from the Stoneforge Mystic. Post-combat, Kyle cast Malakir Bloodwitch.

“How sick,” said his opponent, “You drew your one-of!”

Dread Statuary started on the warpath for Wescoe, who used the 4/2—and not white—creature to crash into his opponent’s protection from white Vampire. Rather than lose his powerful 4/4 to the creature land, Boggemes took the damage, falling to 11 from the attack. His return fire was to send his Beast and Bloodwitch at Elspeth, killing her. He cast a second Garruk Wildspeaker, using the powerful permanent to untap additional lands for a Blightning. The sorcery forced Wescoe to discard two cards, but he did get to gain a life thanks to his Firewalker. With Boggemes nearly tapped out, with no blockers available and on 11 life, Wescoe had a solid chance to put some hurt on his opponent with his Kor Firewalker and Sigil of Distinction (still in his hand). 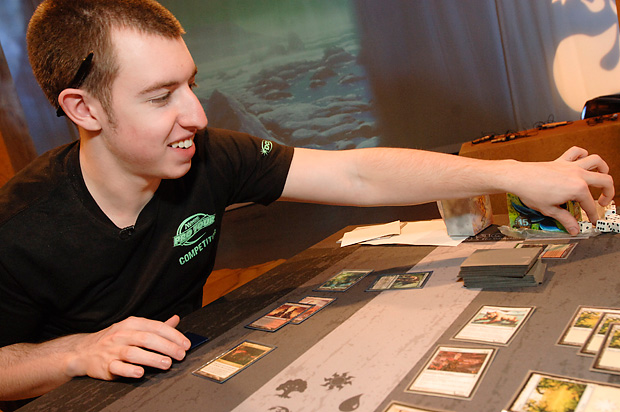 The dice must flow.

Craig cast his Sigil, but only for three counters. Equipping it to his Firewalker made the 2/2 into a 4/4, enough to lethally attack his opponent’s Garruk. Post-combat Craig had White Knight, but rather than equip his Sigil to the pro-black beater, he opted to pass. It was a good call, as Kyle Boggemes had a Lightning Bolt for the Knight. On his turn, the Michigan Jund player moved all-in. He activated a Raging Ravine and sent his entire team to the Red Zone. The attack, which also included Malakir Bloodwitch and a Beast token, left Craig Wescoe at just 7 life.

The game was very much a race, with Boggemes’s Jund deck threatening to wrest control and tempo from Wescoe’s aggressive White Weenie deck. Craig sent his 4/4 Kor Firewalker in to knock Kyle to 7, and had Steppe Lynx and a second Firewalker post-combat. Kyle used Bloodwitch to drop Craig to 3—dead on his next turn to the 4/4 protection from white flyer, meaning he needed to have an answer for the Vampire or a way to kill his opponent. The fact that Boggemes had cast a post-combat Broodmate Dragon didn’t make things any easier.

Craig drew a card and began considering his options. His card for the turn, the only one in his hand, was Arid Mesa. He activated a Dread Statuary, then sent all four of his creatures into battle: the creature land, a 2/3 Steppe Lynx that could become 4/5, a 4/4 Kor Firewalker, and a 2/2 Firewalker. Boggemes used Lightning Bolt to take out the Statuary, giving his opponent 2 life in the process. But Kyle had just enough blockers to survive the turn, and was still able to swing back for lethal. When Craig saw his opponent make the correct blocks, he conceded.

“I think I’m 0-2 against you lifetime,” Craig Wescoe said to his opponent as they prepared for their third game.

“Yeah, you just can’t beat me!” Kyle replied with a smile.

“Maybe I’m saving it up for this Top 8,” Wescoe demurred, grinning.

His strategy seemed to be working as Kyle started the third game off with a mulligan. That didn’t stop his Jund deck from offering up a second-turn Putrid Leech and the mana to cast it, and the 2/2 power common was a huge help in keeping up with Craig’s onslaught of weenies. He had opened with Kor Firewalker, then followed it up with Stoneforge Mystic fetching up Sigil of Distinction. He even hinted at a Path to Exile, slyly tapping a Plains as though he were going to use the spell to force through an attack, then thinking better of it by untapping and simply saying go. Was he bluffing, or waiting for a better target than the Leech?

Boggemes didn’t seem to care either way. He charged his Leech straight into the Red Zone, then cast a Blightning to force Wescoe to discard Marsh Flats and Kor Firewalker. The Sigil of Distinction came down for Craig, making his Firewalker a 5/5, and he attacked with both of his creatures to put his opponent at 11 life. Deciding it was better to play safely, Kyle kept his Putrid Leech back following the large attack from his opponent. He used a Deathmark to dispatch Craig’s Firewalker, unequipping the Sigil in the process, and passed.

With a Stoneforge Mystic on the battlefield and Sigil of Distinction on three counters, Craig Wescoe considered his options. Should he equip his Mystic and try to attack? Or would he be better off holding back and developing his board? Equip and attack it was, but not on the Mystic. Instead, Craig activated a Dread Statuary, made it a 6/4 with Sigil, and rumbled the creature land to the red zone to trade with the Leech (after a 2-life pump from Kyle, of course).

Boggemes cast Bloodbraid Elf, netting himself a free Great Sable Stag in the process, and sent his hasty cascade creature to the red zone to put Craig to 11. Wescoe untapped and dropped Elspeth, Knight-Errant to the battlefield, quickly putting a 1/1 Soldier token next to the mock legendary permanent. The increasingly complex board position put Kyle Boggemes in a complex thinking position. Upon receiving the turn back, he tried to figure out the correct course of action, taking long enough that Level 3 judge Jason Lemahieu leaned in to inform Kyle he needed to make a decision soon or risk a penalty.

Kyle finally decided on sending the team sideways, losing his Bloodbraid Elf as Craig blocked it with both his Soldier token and Stoneforge Mystic. That left Craig at 8 life, but he was able to activate a Dread Statuary, equip it with his Sigil, and give it +3/+3 with his Elspeth to attack right back for a whopping 8 himself. Or he would have, were it not for the Terminate in his opponent’s hand. That meant his land died, and he fell to 1 on his opponent’s counter attack.

The game was nearing its end. Wescoe was dead to a burn spell of any type from his opponent, and had no creatures on the table. Trying to keep his head above water, Wescoe cast a Stoneforge Mystic to find Basilisk Collar, and made a Soldier with his Elspeth. That would keep him alive for a turn, but Boggemes had a trump: a second Terminate. That blew out one of the blockers, and at just 1 life, Craig didn’t have enough to hold on.

While the two players shuffled for the fourth game in their match, quietly waiting for Wescoe to finish a mulligan, the match between Simon Görtzen and Luis Scott-Vargas resolved in the background. After the most dominating individual performance in Pro Tour history, the mighty LSV was felled by the German pro. Whoever won between Kyle and Craig would be the sole American left to keep the title on home turf against the European.

Wescoe had a one-drop for the first time in the match since his Steppe Lynx in Game 1. Instead of a creature, however, it was a Trusty Machete entering the battlefield for the White Weenie player. He did have a second-turn creature in the form of Kor Skyfisher, bouncing a Plains, but Boggemes dispatched the 2/3 with a Lightning Bolt. A second copy of the flyer, this time returning the Machete instead of a land, managed to stick on the table successfully.

Getting his own army started, Kyle Boggemes answered his opponent’s second creature with his first: Great Sable Stag. He took 2 damage, however, as Craig equipped his Skyfisher with a Basilisk Collar and attacked. Kyle kept right up though, casting Bloodbraid Elf and getting a Terminate to blow up his opponent’s only creature, the Skyfisher. He was also able to attack for 6, while Wescoe could only use Oblivion Ring to take out the Stag.

Things started getting really bad for Craig from there. Lacking creatures on the battlefield, he watched Kyle cast a Siege-Gang Commander with a Raging Ravine waiting in the wings. Trying to keep up, Wescoe dropped another Kor Skyfisher but lost his third copy of the card to a Maelstrom Pulse from his opponent. When he didn’t have a miracle a turn later, it was Kyle Boggemes on to the Finals!

Kyle Boggemes defeats Craig Wescoe 3-1 and advances to the Finals!