Görtzen’s initial draw here in the Semifinals wasn’t good enough, prompting him to smile at Scott-Vargas and say, “You are running pretty hot, aren’t you?”

Scott-Vargas joked, “Well, I have had to mulligan a few times in the tournament. Three, I think.”

Scott-Vargas started with a 2/2 Wild Nacatl and a Basilisk Collar, which was sure to be good against the Jund deck. The kitty picked up the Collar on the following turn, and dropped Görtzen to 16. A Blightning stripped an Oblivion Ring and Ajani Vengeant from Scott-Vargas’s hand. He added a Knight of the Reliquary to his team, but it was hit by a Maelstrom Pulse before it could do anything. Scott-Vargas recouped the cards he lost to the Blightning by fetching a Scute Mob and a Wild Nacatl with a Ranger of Eos. The Insect hit play and threatened to get big on the following turn if left unmolested. 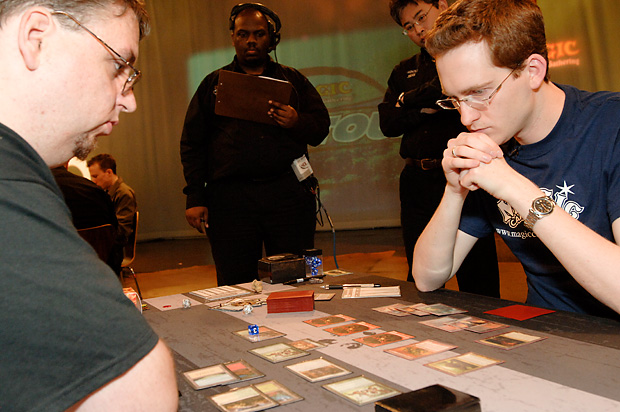 Luis Scott-Vargas is headed for the top, but Simon Görtzen isn’t about to step aside.

Görtzen drew his card and started debating his plays. Ultimately, he ended up dropping a Bloodbraid Elf onto the battlefield, which summoned a Sprouting Thrinax to its side. Scott-Vargas’s Mob got mobbier during his upkeep, and he felt it was time to start sending the team. He activated a Stirring Wildwood, sending it in alongside the Ranger, Nacatl, and Scute Mob. When Görtzen double blocked the bugs with his Thrinax and Elf, Scott-Vargas chose to deny Görtzen any tokens, instead assigning all the damage to the Bloodbraid Elf. After combat, he added his second Nacatl to the team and passed the turn.

Görtzen wasn’t to be denied his tokens, and he recruited a Siege-Gang Commander to his team to replenish his stock of blockers. Unfortunately for him, the quality of Scott-Vargas’s attackers was so high that his creatures really ended up being nothing more than fodder for a turn. This time, Scott-Vargas sent Raging Ravine in with the team instead of Stirring Wildwood, and Görtzen was forced to block with all of his creatures just to stay alive. His Siege-Gang Commander jumped in front of the Ranger of Eos, and the Thrinax teamed up with a token to take down the Ravine. A simple Noble Hierarch from Scott-Vargas emptied his hand and sent the turn back to Görtzen, who was sitting on 2 life, but still had a number of cards in his hand.

Görtzen once again hit a Thrinax off of a Bloodbraid Elf, filling his board with an endless stream of blockers. When he aimed a Maelstrom Pulse at Scott-Vargas’s Wild Nacatl, he appeared to be ready to assume control of the game. Scott-Vargas’s only permanents were lands, the Collar, and a Noble Hierarch. Unfazed, Scott-Vargas simply untapped, drew his card, and flipped over the Lightning Bolt he had just drawn, and within five seconds, Görtzen was scooping up his cards.

“I definitely think I had the more powerful cards that game, but you winning the die roll was important,” Görtzen admitted.

“Yeah, not having the Lightning Bolt for the Nacatl was like 9 extra damage.”

After discussing how great it was that two old dogs like them could still be playing at the top levels of Magic, they presented their decks for Game 2.

Scott-Vargas got another quick start, with a Wild Nacatl and a Stoneforge Mystic to fetch a Behemoth Sledge from his deck. Unfortunately, he failed to play a third land on the following turn. Görtzen’s lands were a little more forthcoming, and he was able to drop a Thrinax into play on his third turn. Scott-Vargas was able to use the Mystic to put the Sledge into play at the end of Görtzen’s turn, but his lack of mana prevented him from equipping it. 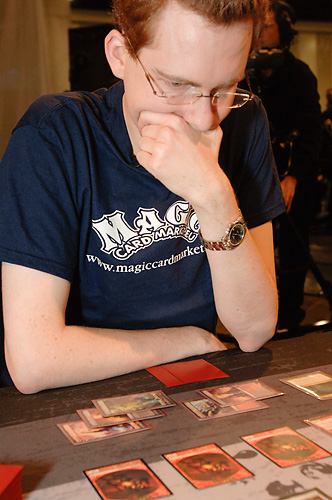 At the end of Görtzen’s turn, Scott-Vargas tried to fix his mana problems by casting Path to Exile on his own Mystic, but Görtzen denied him by using a Lightning Bolt to finish it off first. When Scott-Vargas managed to draw a land on the following turn and tried to equip Wild Nacatl with Behemoth Sledge, Görtzen aimed a second Bolt at the Nacatl. When Görtzen added a Broodmate Dragon on his turn, Scott-Vargas threw in the towel.

For the third game in a row, Scott-Vargas opened with a one drop, this time his one-of Noble Hierarch. This allowed him to drop a second-turn Behemoth Sledge, which the Hierarch looked eager to get a chance to pick up. Unfortunately, it was hit by a Lightning Bolt before it could even try. Making things worse, Scott-Vargas’s mana base at that time consisted of just two Forests, and, when he played a Mountain on the following turn, it became clear that not having access to white mana might become an issue.

Görtzen pressed things with a Sprouting Thrinax and a Putrid Leech, while Scott-Vargas sat on four lands and no white mana. Snagging a Swamp with a Verdant Catacombs enable Görtzen to cast a Bloodbraid Elf, which fetched him a second Putrid Leech. A Lightning Bolt killed the Bloodbraid Elf, but the attack still dropped Scott-Vargas to 8. Scott-Vargas used his Tectonic Edge to kill Görtzen’s Raging Ravine, locking him out of green. It ended up being inconsequential, however, as his deck failed to provide him with a white source, and he was facing lethal damage.

One loss from ending his streak, Scott-Vargas was visibly unhappy at having to mulligan his initial draw. He was even more resigned when he had to throw back his second. 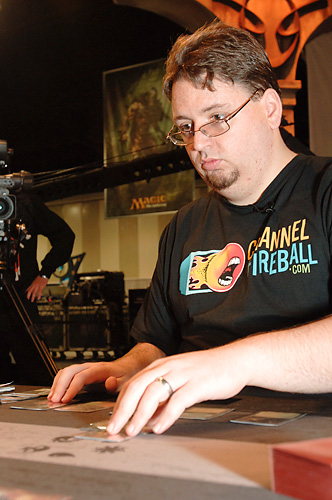 His third hand got an approving nod. Knight of the Reliquary, Behemoth Sledge, Ranger of Eos, and two lands was leagues better than either of his other two hands. A Terramorphic Expanse off the top of the deck made his draw even better, and he used it to get a Forest and an Arid Mesa to get a Plains, allowing a third-turn Knight of the Reliquary. Deathmark ate the Knight, and it was replaced by a Noble Hierarch. Görtzen had a Sprouting Thrinax on his turn, as well as a Raging Ravine. Scott-Vargas made up for his mulligans with a Ranger of Eos to double up on Wild Nacatls. A Bloodbraid Elf from Görtzen added a second Thrinax to the table before rushing in to trade with the Ranger.

Scott-Vargas added the first of his Nacatls to his side, opting to use his second green mana to fix his mana with a Birds of Paradise. Görtzen didn’t wait for anything. Lightning Bolt fried the Birds. Bloodbraid Elf killed the Nacatl. He even got to Bloodbraid Elf into a Deathmark to remove Scott-Vargas’s lone creature. Like 17 other opponents had to him over the course of the weekend, Scott-Vargas smiled and extended his hand.

Simon Görtzen defeats Luis Scott-Vargas 3-1 and advances to the Finals!