-- Jeroen Remie, Kamiel Cornelissen, and Jelger Wiegersma -- were a lock to make Day 2 after Round 4, they started 4-0 but now have found themselves on a slide. They have lost their last two rounds and now sit at a 4-2 record. Shonichide Pon -- Masashi Oiso, Katsuhito Mori, Masahiko Morita -- need to win out to keep the dream of a Top 4 alive. Only three Japanese teams made Day 2 but they have come to own the Rochester Draft format in the past year. 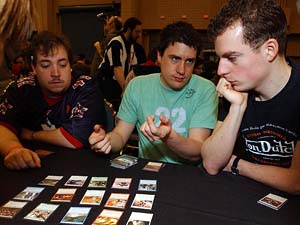 Von Dutch had their work cut out for them.

Shonichide Pon won the die roll and elected to draft second. That seems to be the consensus among the pros in this format: let your opponent place his colors first and then you change your color choices to form the good matchups. The black removal of Rend Spirit and Rend Flesh puts a strain on what type of deck it wants to face off against.

Wiegersma opened the first pack, which was the exact opposite of what the Dutch players were hoping to see. When you open a pack, you want it to be shallow and powerful. Instead, they opened a weak yet deep pack. Wiegersma looked at Order of the Sacred Bell, Sire of the Storm and Pull Under to make his pick. Eventually, he surprised the whole table when he first picked a Brutal Deceiver. After the draft I asked Von Dutch what their motivation was in first picking the red Spirit. They said that they wanted to have Wiegersma play red in the middle and they wanted to make sure that Remie got a good wheel pick out of the pack. Remie ended up receiving both a Kami of the Hunt and the Pull Under so it seemed like their decision had strong merit.

The second pack of the draft saw Cornelissen taking a Kitsune Blademaster. After his first pick Sire of the Storm it became clear that Cornelissen had every intention of going White-blue from the start of the draft. Mori had made it clear in the opening two packs that he was going to be the blue-red mage for Shonichide Pon. He first picked a Soratami Mirror-Guard, second picked a Kami of Fire's Roar, and then a Glacial Ray.

Oiso and Morita were snapping up the black cards like it was an Urza's Saga draft. Morita didn't even appear to have a second color until he picked up a Kabuto Moth followed by a Nagao, Bound by Honor. Black-white is rarely seen as a color combination in previous limited formats but the strong black removal combined with the Spirit theme running through both of the colors has made the archetype successful. Meanwhile, Oiso had been planning on playing Green the entire time, picking up solid green creatures such as Order of the Sacred Bell.

The first pack headed back to the right saw the Japanese try to overwhelm Von Dutch with white cards. There was an exceptionally deep pack in white with Isamaru, Hound of Konda, Samurai of the Pale Curtain and Kami of Ancient Law. Shonichide Pon tried to bounce of one of these strong white cards off of Wiegersma, but he would have none of it. He grabbed the Isamaru and considered a splash of white to go with his red.
The comparable power of both of the teams' decks had remained relatively equal up until Morita opened up a pack with Rend Flesh and Kokusho, the Evening Star. There was also Strength of Cedars in the pack too, but Mori took it as a counter draft because Oiso wanted the black dragon instead.

Cornelissen had a chance to help his team out with a strong last pack of Champions of Kamigawa, but it wasn't to be. Von Dutch didn't seem to be able to catch a break. One of the interesting cards that they pulled out of the pack was a late-pick Hisoka's Defiance. This card could be a game-breaker against a heavy spirit and arcane deck, but Von Dutch didn't seem enthusiastic about their chances.

Betrayers of Kamigawa saw Shonichide Pon pull farther and farther ahead. Cornelissen first-picked a Floodbringer, leaving Horobi's Whisper to fall to his opponent, Morita. Cornelissen must have been in desperate need for cards to let such a powerful card as the Whisper go to his opponent, especially considering that he was blue-white. The only answers he had were a Blessed Breath and the aforementioned Hisoka's Defiance. 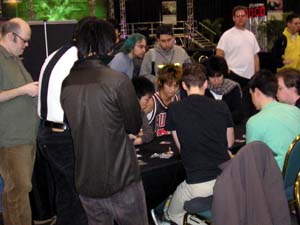 The draft drew quite a crowd.

Oiso took advantage of a Kodama's Reach that he had grabbed earlier in the draft to splash a Torrent of Stone while leaving Mori a Ninja of the Deep Hours. Then Mori picked up a Ronin Warclub.

The Warclub wasn't the best equipment that the Japanese team had, though. That honor would belong to Umezawa's Jitte. Despite the no-talking rule during the draft, you could still hear the Dutch grumbling and the Japanese smiling when Morita opened up the Legendary artifact.

"The draft went savagely bad for us," Remie said as he surveyed the carnage. "We still have a chance though but the draft wasn't good at all."

The Dutch will need some better luck than they had during the draft in order to pull out a win to stay in contention for Sunday.