Pro Tour Atlanta Draft Report: Everything on the Line

as Anton Jonsson and Nicolai Herzog were considered to be the masters of Mirrodin Block, Shu Komuro is quickly building his resume as the master of Champions Block Limited. A little over a month after winning Pro Tour-Nagoya, he has brought his team, Gatas Brilhantes within a round of Top 4. His teammate, Ichirou Shimura, had great success with team S.A.I. before joining Gatas Brilhantes. S.A.I. made it to the Top 4 at the last Team Pro Tour in Seattle before losing to www.shop-Fireball.com2. The last team member, Tomohide Sasagawa, has made two Grand Prix Top 4s in Team Limited. 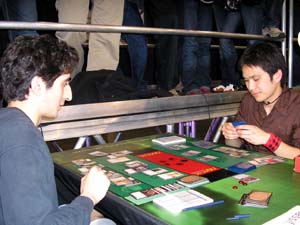 Nassif, left, and Shimura were ready for a titanic battle.

Sitting across the draft table from them is a man who needs no introduction, but will get one anyway. Gabriel Nassif was last season's Player of the Year. He made three Top 8s, including one at Worlds, to lock up that award. Only one thing eludes Nassif, his first Pro Tour win, but first he must win this round to even have that opportunity.

Helping Nassif in his quest for a Pro Tour win are Gab Tsang and David Rood. Tsang's first Top 8 was back in 1997 when he made Top 8 at Pro Tour New York. That was also a limited format, Fifth Edition and Visions draft. One thing that Tsang has lots of is experience. If he makes it, he will set the new record for the longest gap between final-day appearances, taking the record away from Andrew Wolf. David Rood was unfortunate enough to run into the Phoenix Foundation at Pro Tour-Boston 2002. His team, 2020, made it to the finals before the Germans took the championship.

Watching this draft was like watching a low-scoring game in baseball. There aren't the stories of amazing broken cards. The teams both kept opening up reasonable cards. No dragons or broken equipment leapt out of either teams packs. It was a steady draft. The winner of this round will have earned their place in Day 3. As is common in Team Rochester, skill outshined luck.

Last time that Nova was covered, they were all playing red but this time the draft followed a more normal progression. Komuro opened to start the draft off and took a Rend Spirit. Shimura continued to pull black from the pack with a Devouring Greed.

Devouring Greed is one of the top black cards in draft; however on Saturday, a few teams have expressed their distaste for the card in Team Rochester. With so many players drafting black, teams are finding it hard to pick up the necessary Spirits to power Devouring Greed.

The second pack set the tone for the draft. The first of many Honden was opened by Shimura. He elected to take a Kabuto Moth over the Honden. Then the Honden slid through all of team Nova before ending up in Komuro's short stack of cards. Tsang had made it clear that he wanted to be black as well. This put him drafting black behind both Japanese players also playing black. Nassif was the last player to jump into the black pool drafting white along with black. His opponent appeared to be going with the mirror strategy.

As the draft progressed the colors lined up like so:

Once the teams picked their colors the draft became a dance of knowing card ratings. When Nova passed a Horobi's Whisper to Sasagawa taking First Volley over it, it was surprising but after the draft Tsang wasn't concerned about the powerful black removal spell. He said that he only had a few blue creatures, so the Whisper shouldn't be too big of a factor. In fact, he seemed more worried about the Honden of Infinite Rage and Matsu-Tribe Decoy that could eat his team of one-toughness creatures alive.

In the mirror match, Nassif hopes that his pair of Painwracker Oni combined with a few Ogres will be able to work their way past Shimura's defenses. Rood has an Iwamori of the Open Fist but Komuro has a number of Frostwielder and a Honden of Infinite Rage to compliment his quick blue-red deck.