were plenty of teams mired in the 0-2 muck at the bottom of the standings as the second deck build of the day got under way. It is quite possible that none of them were less happy then Gwalls Soaking Wet (Eugene Harvey, Adam Horvath, Patrick Sullivan), one of several TOGIT teams playing Friday.

TOGIT, a New Jersey-based store that is home to Osyp Lebedowicz, Harvey, and reigning National Champion Craig Krempels (among countless others) has played host to Kai and the Dutch for the past week in preparation for this event. After non-stop playtesting Team Rochester, to say that Patrick Sullivan's team would be disappointed to not have an opportunity to put that knowledge to the test would be a gross understatement. 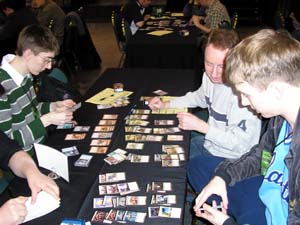 "Seriously, if we can get to tomorrow…" explained Sullivan, rising from his chair for emphasis. "I think it is safe to say that with the exception of maybe six or seven teams, we can embarrass any other team in the room."

They pleaded weak card pool for their presence in the 0-2 bracket as they cracked open the tools they were being provided for rounds three and four. Things looked up immediately as Sullivan whipped an Eight-and-a-Half-Tails from the white cards and plopped it in the middle of the table. "We already have one card better than our entire card pool last time," he said.

"We have a Glacial Ray…" Horvath was quickly scanning through the blue and red cards -- his color preferences were made very clear. He suddenly looked up and beamed, "We have two Rays."

Harvey was busying himself with the green cards and trying to not get caught up in the optimism of his teammates but Pat Sullivan was ready to declare, "Okay guys, the rally starts here. We have infinite better cards than last time."

Harvey was shaking his head. "Yeah but we have four --" he pulled a Mirror Gallery from a pile of chaff in front of Patrick and corrected himself. "-- five rare artifacts and a rare land." I won't bother with the inventory list, but Long-Forgotten Gohei was the only one not better off long-forgotten.

While many players would be very happy to see a card like the Gohei, it seemed to give Sullivan pause. "That is an awkward card. You can end up getting really greedy with it. If you get a deck where its naturally good that's fine but when you start trying to work things in around it…"

By now each player was camped out in front of their base color. Adam was firmly blue-red with his double Glacial Ray and plenty of outlets to maximize the abuse he could inflict with them. Eugene had green cards -- with multiple Gnarled Mass and abundant fatties and mana accelerants -- while Pat had Eight-and-a-Half-Tails, double Waxmane Baku, double Split-Tail Miko, and double Mothrider Samurai highlighting the white cards in his line of sight.

It was decided that Adam and Eugene would split black with Hideous Laughter destined for the green-black fattie deck, while Harvey put two copies of Wicked Akuba into Pat's two slot -- right over his legend.

"Oh Eight-and-a-Half-Tails…your value just keeps going up and up," sighed Sullivan as he held up the double white and double black cards his deck was now sporting. "The mana in this deck is fast becoming a fiasco. I would seriously prefer if Tails was just Kami of Ancient Law."

Meanwhile, Horvath was cutting creatures and moving more and more Arcane cards into his playables to exploit the Glacial Rays. He had more than a dozen arcane spells, one Long-Forgotten Gohei, and too many creatures to get within his 23-card comfort zone. "This is the type of deck that will never lose but people will complain when they don't beat me."

Patrick got his teammates attention when he announced, "Okay we have 28 cards and need to start making cuts…" He announced each card as he moved it from his played pile to his sideboard area:

Neither Eugene or Adam were prepared for anything so drastic and made him put it right back. They presented the option of cutting a Split-Tail Miko and sitting one of his Akubas on the bench, next to his unplayed second copy of Devouring Greed. They swapped the double black Ogre Marauder with the easier-to-cast Takano Bleeder between Harvey and Sullivan.

While this mollified his mates, Sullivan was now uneasy about the build. "How many spirits do I need to play in order to run the Devouring Greed?"

Slowly Harvey and Horvath were coming around to Sullivan's point of view which was fixed directly on two Wicked Akubas and two Waxmane Bakus to push them through. Sullivan pushed them, "I could build a much better deck if Eight-and-a-Half Tails wasn't in out card pool."

Harvey relented -- sort of, "Okay build the deck without Eight-and-a-Half-Tails…" He leaned over to Adam and whispered, "…and then we will put it back in."

Sullivan began rearranging his cards and looking over at Harvey's arsenal of cards, "Eugene, can you spare that Horobi's Whisper?"

Eugene had an excellent deck that could afford to spare a piece of removal and he handed it over. They swapped the Ogre Marauder and Bleeder back to their original teams and when they were done Sullivan leaned back and announced, "This deck is ridiculous. Look how smooth this deck is. Seriously guys, I can board in Tails against other white decks."

Eugene was cautious, "I just want to make sure the deck is good."

"I get a second Greed -- look at this spirit lineup…"

At this point Horvath was on Sullivan's side and was appraising the deck and his teammate. "This is exactly the kind of thing I want to see on this team -- cutting bombs because it is correct."

Sullivan could scarcely believe he had convinced them and seemed giddy at the prospect of having the bomb rare in his sideboard. "I want to run the even/odd set number with this guy to see people's faces."

Players will often decide who will get choice regarding playing first by selecting a sideboard card and asking the opponent to guess whether the set number on the card is even or odd. Usually they do this with bad cards. Sullivan was practically standing up in his chair. "This deck is off the charts!" 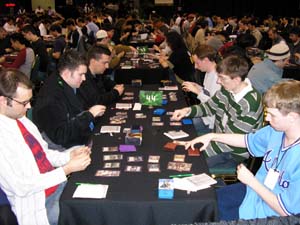 Did the deckbuilding work out? Go check the standings.

Suddenly he sat down and looked over at Horvath's deck. "Can I ask you a question…?"

A shrug from Horvath.

"Why isn't Long-Forgotten Gohei in my deck?"

Horvath knew Sullivan would end up with the rare artifact but put up token resistance, "It makes my deck operate on a higher level."

With the Gohei changing hands that pretty much solidified all the major card decisions. Harvey and Sullivan had to settle up the division of black sideboard cards and when Sullivan flipped through them he stopped the presses when he saw Bile Urchin.

"Whoa, whoa, whoa… what is this guy doing here?" He casually tossed his Lantern Kami into his sideboard to accommodate the tiniest Syphon Soul.

Harvey shook his head, "I shouldn't have even let you see those cards."

Never let it be said that Patrick lacks the skill for compromise and he put the Urchin in his board, "The deck has actually gotten better with this guy but I will make this concession and play the flier. You guys have been very considerate of my…modifications."

When asked if his choice not to play Eight-and-a-Half-Tails would draw any comparison to Zvi's infamous choice of Leonin Bola over Fireball during the draft portion of U.S. Nationals, Patrick was unconcerned. "There is actually a good reason behind what I am doing."