you heard of Von Dutch? No, they aren't a famous 80s rock band, but instead a gang of super-cool magicians. Jeroen Remie, Kamiel Cornelissen and Jelger Wiegersma haven't lost a Team Limited match since Day 1 in Pro Tour-Seattle, when they lost to Shu Komuro's team, TomTom.com. Of course, Komuro wasn't yet a Pro Tour champion when his team beat Von Dutch 2-1. 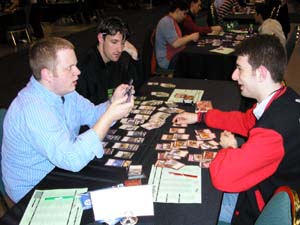 Von Dutch decided to go with a white-red deck this time to take advantage of two Hondens. They had both Honden of Infinite Rage and Honden of Cleansing Fire and wanted to keep the two cards together. This left them with a green-black deck and a Blue-red deck. The previous rounds Remie had played black-red both times, Cornelissen played blue-white both times while Wiegersma played green-red and green-black.

Von Dutch was one of seven undefeated teams after four rounds of Swiss. Another undefeated team had U.S. National Champion Craig Krempels and Jon Sonne. They decided to part ways with Gerard Fabiano before this event, instead picking up Kate Stavola to be their third. The move seems to have paid off as Shermans March continues to roll Atlanta.

They felt that the key to their success was that they played lots of Sealed Deck before the event. They believe that they have built their decks well while trying to spread out the removal. Krempels has become their specialist at winning with the weak deck. They have played the same colors in each Sealed Deck with Stavola playing black-red, Sonne playing green-red and Krempels playing blue-white.

None of the undefeated teams seemed so pleased with their record as Paul Jordan LOL. Paul Jordan, Steve Sadin and Michael Clair had an air of levity surrounding them as they put together their last set of Sealed Decks. Who wouldn't be happy with 4-0, especially considering their newest set of Sealed Decks contained Kokusho, the Evening Star, Earthshaker, and Jetting Glasskite. They divided up their decks selflessly. Every few minutes they would switch seats to get a better perspective on their cards. 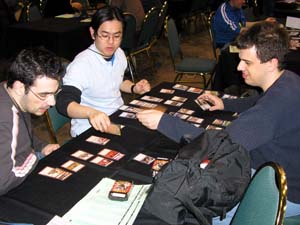 Boat knocked off Shermans March, another 4-0 squad, in Round 5.

Paul Jordan LOL has played different decks in each separate sealed build. This time they are playing green-red, blue-red and white-black. They divide up the decks based on their draft strategy for Saturday. Paul Jordan has played black each round because he says that he feels the most comfortable -- comfortable enough for them to upend previously undefeated Von Dutch in Round 5. So much for that winning streak, boys.

Another undefeated team are a handful of Pro Tour veterans. Frederico Bastos, Tiago Chan and Rui Mariani represent the Iberian Peninsula as team Boat. After long debate the Spanish/Portugal team divided their colors white-blue, white-black and red-green. They are one of the few teams to have split white in the tournament. It looked like they were taking advantage of some strong blue cards such as Sire of the Storm and Meloku the Clouded Mirror to carry their split of white cards to victory. It worked in round 5 as Boat defeated Shermans March to improve to 5-0.