the lead-up to the Team Pro Tour often includes a series of alliances, negotiations, and stunning events worthy of a daytime soap opera, I figured I should give you a rundown of some of the interesting and intriguing teams that you should know for Day 2. 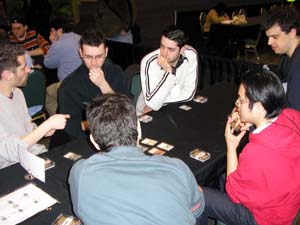 Les Baltringues de Lupidia, background, and Boat were the only undefeateds after Day 1.

Let's start with the lone set of undefeateds left in the tournament, Boat. This group of Portuguese players (or Tugas, for those of you in the know) features two-time Pro Tour Top 8 member Frederico Bastos, Pro Tour Nagoya 9th-place finisher Tiago Chan, and old man of Portuguese Magic Rui Mariani. According to coverage reporter and generally cranky fellow Tuga Rui Oliverclothesoff (Oliviera to those not in the know), Bastos and Mariani used to have a different team that hardly ever lost in sanctioned play, but that individual didn't travel, so the gave him the boot and hooked up with Tiago.

Facing Boat in the first Rochester of the day was the French team Les Baltringues de Lupidia. This squad from Clermont-Ferrand is led by Pro Tour-Yokohama Top 8 member Benjamin Caumes, with teammates and friends Nic Bornarel and Camille Fenet in tow. Caumes and Bornarel have played in a couple PTs together previously, but when their former teammate stepped away from the game, they picked up Camille and qualified for the event via PTQ.

While by this point in the weekend, everyone should know who superteam Shonichide Pon (Oiso, Morita, and Mori) are, Gatas Brilhantes is one of the Japanese teams to pay attention to this weekend. Led by recent Pro Tour-Nagoya winner Shu Komuro, it also features Seattle Top 4 member Ichirou Shimura (formerly of S.A.I), and GP Shizuoka Top 8 member Tomohide Sasagawa. After finishing third at Grand Prix-Osaka, this team chose to stick together for Atlanta, leaving S.A.I. to shuffle their members and form a new team.

There are also a number of intriguing American teams in Day 2 that you might not be very familiar with. We've already mentioned how three of the four the LCQ teams made Day 2, but two relatively unknown teams from Day 2 of Grand Prix-Chicago are also plugging along. Paul Jordan LOL (formerly Clair Jordan) finished Day 1 at 5-1, putting them in good position for a potential Top 4 slot, provided they do well in the drafts Saturday. The most notable name on the team is probably Paul Jordan, a player that has been passed around more Northeast teams than I can comfortably complete this metaphor on a family site. Jordan is joined by Star City writer and New York state champ Michael Clair, and the youthful Steve Sadin. 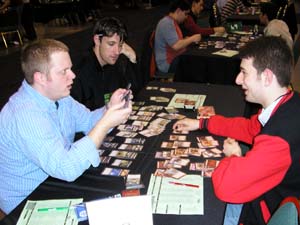 The other Chicago team I was referring to was "He's Not Our Dad" otherwise known as the team featuring edt and two people who look like they are under 18. The kids joining the dinosaur this weekend are Chris McDaniel (known as Star Wars Kid -- no, not that Star Wars Kid -- in most Magic circles), and Ms. Alana Burman, fashion expert and Europhile. They clinched a spot at the draft tables in the last round yesterday with a 1-0-2 victory in the final round.

Team CMU has a looooong tradition of doing well at team events, but with 99.8% of the area Magic players now working for Wizards R&D, most people figured that this was a legacy that would disappear altogether (or at least transition to New Jersey along with most of the remaining CMU/Togit pros). While this is essentially true, there is a CMU team in Day 2 (Richadillyotch), and the TOGIT influence on Day 2 is actually pretty extensive, depending on how far you want to stretch "loosely affiliated."

Aside from the obvious two teams (NFC and Shermans March), the Dutchies once again came and tested at TOGIT this year, as did Kai's squad. Other teams sporting a TOGIT member or making at least a brief appearance to learn from the Jersey Team Limited dojo were members of the following teams: He's Not Our Dad, Lab Who, Richadillyotch, Paul Jordan LOL, and Big-Tyming w/A. DeRosa -- or 20 percent of Day 2 when all is said and done. Not bad when many of their former greats are now designing the game they were so successful at playing.