Pro Tour Atlanta Feature: Reflections on the Format with the Team CMU/R&D

the years, there have been few teams that have had as great or as long-lasting an effect on the game as the boys from CMU, particularly in Team Limited.

In the U.S. it was almost always the CMU strategies that were ahead of the game for Team Limited, and more than few CMU teams made the Top 4 of the Pro Tour as a result of their hard work on a format. These days the Team CMU legacy is mostly carried by Team TOGIT, a result of the CMU/Togit merger a couple of years ago. Thus, even though many of the CMU alumni have gone on to work for Wizards of the Coast designing the game they came to love, you can see the fingerprints of Car Acrobatic Team, Potato Nation, and Zabuton Nemonaut lingering on the successful teams of today. 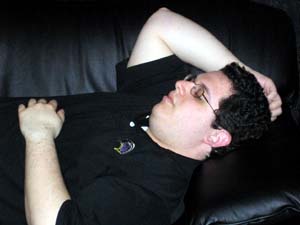 The Potato in repose.

Since both Aaron Forsythe and Mike Turian are here in Atlanta this weekend, I decided to sit down with them and discuss their thoughts on Kamigawa Team Limited, their memories, and how they feel today's teams are faring in this most challenging of formats.

So for the record, state your Team Pro Tour resume.
Forsythe: I finished second and fourth in two different PTs and also had a Top 20. Oh, and I won a PTQ with Turian one time as well.

Turian: I won the Pro Tour with Potato Nation and then had a Top 4 and a 7th.

Give me some thoughts about the words "Team Limited."
Forsythe: It's tons of fun. I guess it's a little weird when you are choosing teams because feelings can get hurt...

Turian: Yeah, choosing teams was always a pain in the butt -- Gary Wise tricked me into teaming with him one time, actually, but that worked out pretty well.

Forsythe: But when you finally start playing, it ends up being a great deal of fun. Often you find yourself sealed off playing Magic and testing by yourself, so it's nice to get the social aspect of Team Limited in there.

Turian: Yeah, it's good to have relevant stories that other people actually want to hear about. Usually in solo events you tell your mana screw story or your great play and it's no big deal, but in teams you are really pulling for your teammates and actively care about what they have to say. 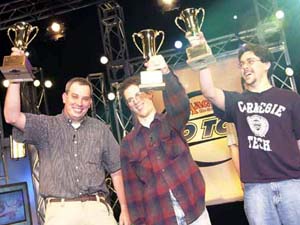 'Coach' Forsythe, back in the day.

How did you prepare for team events?
Forsythe: We used to play a lot of sealed deck before Pro Tours, and I think a lot of today's pros are selling it short as a skilled format right now.

Turian: Mostly by playing at the 'O' and going to PTQs. Team PTQs are a great place to learn how to build better Sealed Decks and to learn where most people are putting their archetypes. At the 'O' we'd Team Rochester a bunch of the nights leading up to big events or we'd bust Sealed Decks.

Forsythe: The year I played with Chapin and edt, Pat had this huge shopping bag of Sealed Decks bound together by rubber bands, and we'd just keep putting those together to learn the ins and outs of building decks for our team. It seems like a lot of pros these days think Sealed is really uncontrollable when all of our experience shows that that idea simply isn't true. If you build a lot of decks and try different strategies, you learn to be flexible with your card pool, thus creating a lot more options for you to build.

Right now I see a lot of teams with rigid builds, where they keep putting together the same archetypes and then complain about their card quality after losing, but that's rarely stopped the teams that have really practiced from doing well before. Maybe this format is different -- I haven't tested a lot of Team Sealed - but I'm not so sure...

Turian: You practice to learn how to make things work, whatever your card pool. People used to tell me that certain builds and color archetypes couldn't possibly work well together, but when I'd test, we'd learn that they were wrong.

Forsythe: Yeah, and I really think you can get ahead through creativity. All this theory about what works and what doesn't... Theory sucks, it's all about what's winning.

What was your favorite Team Limited format and why?
Turian: Invasion.

Turian: Though Urza's Saga was pretty decent too.

Forsythe: I still think it's Invasion, though that may have something to do with the fact that Invasion was just great for Limited in general. You always got your color-fixing in that format and could do a lot of weird things that you don't see in many other formats.

Turian: I liked it because it had a lot of tension during the drafts. Rochester Drafts in some formats turn into boring things because people just end up taking the same cards again and again that fit their colors -- Invasion wasn't like that. In those drafts it was much tougher to keep track of what colors people were playing, you could splash for almost anything. It was just a really neat time to be a drafter because you had so many options open to you.

Forsythe: Turian is a clear second, though. I say Kai, because we were using a Turian strategy when we got annihilated by Kai back in New York 2001.

Turian: Wasn't Kai using my strategy that year, too?

Is this a Pro Tour only format?
Forsythe: I think so, at least at the Team Rochester level it is. There's this concept of Team Leader in Team Rochester that you don't really get anywhere else. In a normal eight-man draft, you have about 30 real decisions to make, but those guys who sit in the middle and see everything, directing their entire team's draft. Those guys are making like 100 decisions every Rochester, plus they have to remember what cards their opponents are drafting to try and create favorable matchups and worry about hate drafting bombs away from the opponents. Those guys are amazing.

What are your thoughts on the current format?
Turian: Drafting it felt like a throwback to Mirage Block Limited, but we (as in R&D) have learned a lot since then. You can see some of that in all the Spirit/Arcane and Samurai/Ninja sort of themes. It makes teams play and build a little better because they have to find ways to maximize those resources to build better decks.

Forsythe: This set should be really cool for drafting. In Sealed because you can't really choose your matchups, it seems like you can sometimes get obliterated -- there are white-blue and white-green decks that simply can't deal with certain cards -- but Rochester lets you counteract that and try to construct favorable matchups.

Tell me something about Team Limited that people may not know.
Turian: Team Sealed is all about taking things to an extreme. Take the best booster draft deck you've ever had and it's only an okay Team Sealed deck. There are some formats that exhibit that more than others, but it's always true.

Forsythe: You can actually be "good at teams." Magic players often have strong personalities and some folks might not necessarily get along together when put on the same team, even if they are friends. When I was playing, I was really good at managing the personalities on my teams -- getting Andy Johnson and Andrew Cuneo to cooperate through an entire Pro Tour might seem impossible to people who knew those guys, but we worked really well together and had a lot of success because of it.