our last team Pro Tour in Seattle, we often brought up how valuable being able to practice with your teammates was. The Japanese teams in particular taught that lesson to their opponents round after round, as www.shop-fireball.com2 and S.A.I. waltzed into the Sunday matches. 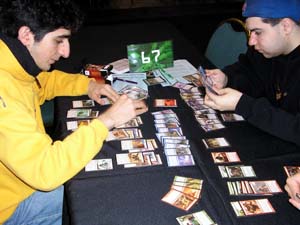 Gabriel Nassif assembled a bit of a hodgepodge team.

When looking around the room as the teams started to build their first set of Sealed Decks (with two Starter Decks of Champions of Kamigawa and four Booster Packs of Betrayers of Kamigawa), Spirits, Ninjas and Samurai were all being divided into the appropriate decks.

The early archetypes that appeared to be popular were a Green-black, Blue-black and a Red-white deck or a White-black, Blue-black, and Red-green build. Ben Stark's team, Ligers, with Eric Froelich and Brian Kibler, went their own route. Stark put together a mono-black deck to take advantage of double Horobi's Whisper, double Okiba-Gang Shinobi, and double Midnight Covenant. Squads, Packs, Souls…, with Ken Krouner, Joe Crosby and Geddes Cooper, qualified in the Last Chance Qualifier playing Blue-white, Red-black and Red-green. Friday they switched strategies to Blue-black, Blue-white and Red-green.

One of the most bizarre team formations of Pro Tour-Atlanta is Gabriel Nassif teaming with Gabriel Tsang and David Rood. Nassif's deck was looking good with Nagao, Bound by Honor, Isamaru, Hound of Konda and Final Judgment. The Max Fischer Players, Chris Pikula, Igor Frayman, and Josh Ravitz, are looking to top their 8th-place finish at Pro Tour-Seattle and have three Okiba-Gang Shinobi to help them along. When I wandered over they were going through a color scramble with less than 20 minutes to go in deck building.

Of all the teams in the Pro Tour, only two had their decks laid out in front of the whole team instead of individually. Itaru Ishida sat in front of his team's entire card pool. Jin Okamoto and Tsuyoshi Ikeda just watched and made small comments as Ishida divided up the card pool. 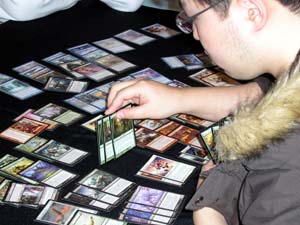 Ishida was pointing out the nonbo (not a combo) of Kami of Fire's Roar and Ogre Recluse. Their new team name Fireball.Pros will fool no one here; they are still the same team that were runners-up in Seattle last season.

The only other team with the cards laid out in front of the whole team was Big Decks, Nathan Waxer, Geoffrey Bell and Nam Tram. While these three might not be well known, just the fact that they are following the Japanese lead must bode well for their chances for success.

While Marco Blume stayed behind to work at his new job in Germany, Kai Budde and Dirk Baberowski both made the trip to Atlanta. Budde decided not to team with Baberowski, leaving the three-time Pro Tour champion out in the cold. Budde instead teamed with Bernardo Da Costa Cabral and Mattias Jorstedt as www.cardshark.com. Da Costa tried to inspire his teammates asking, "What do need to improve these decks?" Budde responded, "We need Spirits and a better mana curve."

Across the way was Top Set -- Bob Maher, Jr., Neil Reeves and David Williams were more interested in reading their cards to figure out what they did than trying to make their decks better. If any teams raw talent could make up for lack of experience with the new format though, count on Top Set to be that team.

Cards such as the Honden and Zubera really shine in the Team Sealed format. Anton Jonsson's deck featured two Floating-Dream Zubera and two Ember-Fist Zubera. While the Ruels were putting Honden of Life's Web and Honden of Infinite Rage into their Red-green deck. The teams playing Friday have six rounds of Swiss in front of them, with 12 points being the magic number to advance to Day Two. With two more Sealed-Deck builds to go, each team will reconsider their teammates, their card choices and their play moving forward at Pro Tour-Atlanta.