draft wisdom states to never counter-draft. It just doesn't make sense, the logic claims. Well, at the Team Pro Tour throw, that logic out the window. The two most common signals that teammates send each other are "This one's for me" and "Thumbs down."

Thumbs down means one thing: take one for the team. Look, it is Yosei, the Morning Star and your teammate who is about to draft isn't playing white -- give Yosei the thumbs down and you won't have to worry about playing against Yosei, either. Shermans March did just that as Jon Sonne proudly showed off the white dragon in his sideboard. 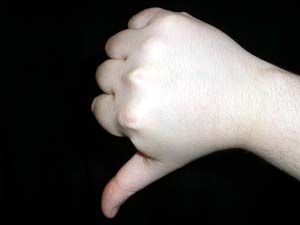 In regular Booster Draft, you have a potential of seven different opponents while in Team Rochester Draft you know exactly who you will be playing. This fundamental difference is why so many players hate-draft in Team Rochester.

Antonino De Rosa took a Matsu-Tribe Sniper out from under his opponent's nose. He said that the Sniper would singlehandedly beat his blue-white deck and there was no way he going to let that happen. So he gave up a quality pick and took the little pinger out of his opponent's hands.

Gabe Walls had a whole handful of cards that he had counter-drafted from his opponents. Wicked Akuba, Order of the Sacred Bell, Befoul and Orochi Sustainer all ended up in Walls' sideboard. His teammate, Dave Humpherys, on the other hand chuckled when asked if he had hate-drafted. He described himself as being greedy, with his only hate-draft being an accidental one on himself when he took a Sokenzan Bruiser, thinking his opponent was playing red.

Osyp Lebedowicz's team, NFC, probably needs to use the thumbs down signal more than any other team in the room. When I sat down at their table, I couldn't get a word in. The "chatter" between Lebedowicz and teammates Gerard Fabiano and John Fiorillo went on non-stop. Of course, the only way to communicate to these three is through signals.

Grand Prix-winning Thaaaat's Me, with Bill Stead, Chris Fennell, and Chris Gandy, didn't even draft blue at all. Instead they hate-drafted a few of the critical blue cards in the draft and played four colors. They picked up a Consuming Vortex and a Genju of the Falls, but aside from that let their opponents take all the other blue cards.

Sometimes your draft goes so bad that your whole deck feels like it is a counter-draft. Jordan Berkowitz and Gab Tsang both had this happen to them. Berkowitz didn't figure out a way to get his draft back in shape, while Tsang's teammates felt that Tsang's matchup was so bad that they would be better off having him hate-draft from the other team.

Before you decide that hate-drafting is the next cool thing, remember some words of wisdom from World Champion Julien Nuijten. His team didn't counter-draft a Final Judgment because they felt that Nuitjen could defeat the card and his teammate really needed the depth from the cards in the pack. So be careful that you are hate-drafting your opponents and not your own team.