shuffle shuffle. Exchange decks. Shuffle shuffle. It is a ritual that has happened many times this weekend but these riffle shuffles have a little more snap. A lot of pride is on the line. Don Smith would join a very short list of players who won at their very first Pro Tour. Gab Tsang would show why he was the original Juggernaut on the Magic Pro Tour. 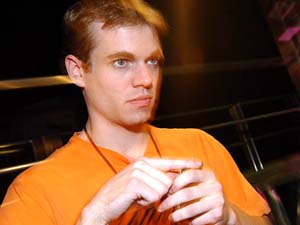 Smith's road to the Top 4 started back in 1995 when teammate Andrew Pacifico invited him to a local tournament in Florida. Pacifico won the tournament with a deck featuring a Sol Ring and a Dragon Whelp. Pacifico would later win a J.S.S. championship while Smith's involvement in the game wavered. Sunday, 10 years later, they are teamed trying to claim the title of Pro Tour Champions. Opportunities like this are what makes the Team Pro Tour so special.

Smith won the flip and chose to play. Tsang played a first-turn Psychic Spear. Smith's hand was Shinka Gatekeeper, Waking Nightmare, Dance of Shadows and three Mountains. Smith had played a Swamp on his first turn.

Now that you have seen Smith's hand, Tsang was holding, Distress, Moonlit Strider, Cruel Deceiver, two Plains and a Swamp. Smith and Tsang had started early so the Psychic Spear took a few minutes to resolve waiting for the other matches' mulligans to catch up.

Tsang choose Waking Nightmare and play continued. Tsang played out a second-turn Cruel Deceiver opting to wait on his Distress. Smith threw out the Shinka Gatekeeper.

Tsang had drawn Kabuto Moth and happily played it out. The Moth was one of the cards that Smith said he had feared when talked to before the match. He felt that he needed to be the aggressor in the matchup and that the Moth gave his best plans to win real problems. He felt so strongly about needing to be the aggressor as to leave Hideous Laughter in his sideboard.

After some debate Smith attacked with the Gatekeeper trading with Cruel Deceiver. He had a new Gatekeeper after his first one died. Tsang continued to lock down the board laying out Moonlit Strider. After Smith had no play Tsang attacked for 1 and played out a Kami of the Painted Road.

Smith tapped all six mana to Pull Under the Kabuto Moth but Tsang saved it with the Moonlit Strider and retrieved a Cruel Deceiver. Tsang finally cast the Distress he had since his opening hand taking out the Dance of Shadows. Cruel Deceiver came back out for Tsang.

Tsang swung with both Kami of the Painted Road and Cruel Deceiver. The reborn Deceiver traded with Smith's only creature, Shinka Gatekeeper. Smith continued to draw and play land but didn't have a creature play until Battle-Mad Ronin.

Tsang waited for the Battle-Mad Ronin to attack. He just took 1. Smith followed up the attack with a Kami of Fire's Roar. Tsang cast a Kami of Ancient Law to give his Kami of the Painted Road protection from red. The attack left Smith at just 6 life.

Battle-Mad Ronin came across for another point. A Cage of Hands on the Kami of Fire's Roar and an all out attack finished off Smith.

Smith played first again Game 2. He didn't have a one- or two-mana play but neither did Tsang. Smith made the first move with a Takenuma Bleeder on turn three. Tsang answered with a Bleeder of his own. They traded creatures on Smith's attack.

Smith then played out a second Bleeder. His deck seemed to love to give out multiples of the same creature, last game with the Shinka Gatekeeper and this game the Takenuma Bleeder. 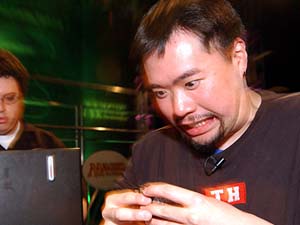 Tsang can hardly control his excitement.

Tsang dropped out one of his bombs, Yakora, the Prisoner. With Yakora out as a 5/5 it would certainly cause a large threat to Smith. Smith played out a Kami of Fire's Roar before passing the turn.

Tsang now had to decide whether to commit more creatures to the board. Eventually he decided to play out a Kami of the Painted Road. Tsang played a newly drawn Cage of Hands on the Bleeder that let Tsang swing in for 8. Once again Tsang needed to decide how likely it would be for the Prisoner to die.

Tsang decided to hold back his Kabuto Moth. Don Smith could only build up his land count and ask," What am I on?" before chump blocking with Kami of Fire's Roar.

Tsang played a Soulless Revival on Takuna Bleeder and replayed the Ogre as a pre-caution against Yakora dying to a Pull Under but Smith had only land. The cameras shifted over just in time for Smith to concede, giving Nova an early 1-0 lead in matches.