Jacksonville player who made a U.S. Nationals Top 8 appearance in 1998, Andrew Pacifico hasn't been heard of much since. He was seen last year in Seattle trying to grind into the Pro Tour with good friend Ken Krouner, but was knocked out of the competition in the Top 4, just missing out on the main event. This year they had a bit more luck in running the gauntlet, winning an LCQ slot and then becoming the first Last Chance players ever to appear in a Pro Tour Sunday. 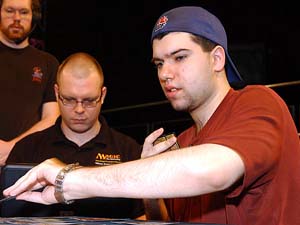 David Rood made a worthwhile trip to Atlanta.

This particular composition of We Add almost didn't happen. Pacifico and Don Smith were always a lock to play together, having been friends for about a decade, but Adam Chambers was a slightly different story. Chambers was always planning to come down and play, but when Terry Soh decided to try and put together a team at the last minute, he asked this reporter for help.

I sent him a list of players that had enough points and were willing to play with Terry and at the top of my recommendations were Simon Carlsson (who teamed with Terry this weekend) and the kid who I called "one of the tightest young American Limited players that nobody knows -- Adam Chambers." Terry eventually chose to tagteam with his brother Joe Soh and Carlsson, leaving Chambers free to team with Pacifico and Smith, and the rest is now Magic history.

The short version of David Rood is that he's a very skilled player, but he doesn't work very hard on his game and plays a lot of World of Warcraft. The long version goes something like this. I first met David Rood at the Team Limited Grand Prix in Pittsburgh back when he was playing with 2020. Since then, the two of us have become solid friends -- I track his progress on the Pro Tour and encourage him to keep showing up, and David occasionally tells me I'm not writing enough (he's usually right). Our friendship, however, is a pale shadow of what he shares with reigning Player of the Year Gabriel Nassif. Yellowhat is the cattle prod that gets Rood to put his computer aside, leave his Montreal home to came play Magic. In New Jersey last summer, Nassif shared his green-red Tooth and Nail deck with Rood, and it was David who succeeded with deck, contending for the Top 8 most of the day until losing to Chris McDaniel in a mirror match in the penultimate round.

Back at Worlds 2004, I asked Rood if he was planning to play teams this year, and he told me "Only if I can get Nassif to play with me. I'm twisting his arm a bit on this one, but I think we'll have a good time if we do."

It turns out that he was indeed persuasive enough, landing Gabriel and then snagging former Worlds Top 8 member and dinosaur Gab Tsang as their third. Both Rood and Nassif have previous Team Pro Tour Top 4 experience, but neither one has ever taken home a title. Tsang hasn't been seen in a Pro Tour Top 8 since Worlds '98, so they make an interesting trio.

Before we sat down, David told me about this little detail from Day 1. 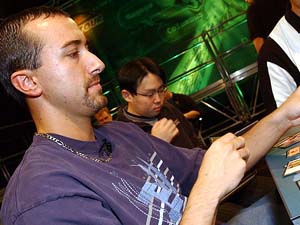 Would a Myojin be enough for Pacifico?

Rood's deck is an intriguing piece of work -- it's all creatures plus a Phantom Wings and a Petals of Insight. Thankfully for Rood, those creatures are awesome sights such as Meloku, Jetting Glasskite, a host of flyers and a few ninjas and Zuberas as well. In contrast, Pacifico has both spells and creatures, but aside from his expensive bombs -- Myojin of Cleansing Fire and Yosei -- his deck is mostly defensive in nature. It's difficult to see how he's going to mount much of an offense, so he may just have to wait for one of his bombs and hope for the best.

Rood won the coin toss and chose to play. He saw a hand of lands and creatures -- big surprise there -- and chose to keep. Pacifico did the same. Floating-Dream Zubera and Konda's Hatamoto were the respective turn-two plays from the players, as Rood followed that with River Kaijin and Soratami Mirror-Guard. Pacifico settled in for the long fight when he cast Honden of Cleansing Fire. Rood attacked with his team, and ninjutsu'd in a Ninja of the Deep Hours, dealing five in the process and drawing a card. The same pair repeated the damage next turn, with the Guard making "Ninjaphid" unblockable, putting Rood up two cards before he cast Frostwielder, dropping Pacifico to fourteen.

Seat A reported in briefly with Tsang taking a 1-0 lead, and Chambers beat Nassif in Game 1 of their match.

Drew's deck coughed up its first bomb on turn six, dropping Yosei, the Morning Star into play, making his board Hatamoto and Dragon vs. Ninja, Zubera, Kaijin, Mirror-Guard, and Frosty. Mistblade Shinobi sent the Dragon right back to Pacifico's hand, but Rood now had a problem. Pacifico's deck features one of the two Wrath of God-type spells in the format in Myojin of Cleansing Fire, meaning if Rood builds up enough men to overwhelm Pacifico and his Honden, he leaves himself wide open to Myojin bashings. However, if he doesn't do so, he gives Pacifico even more time to draw the Myojin if it is not already in his hand. For those of you playing the home game, Rood also had Teller of Tales, Ember-Fist Zubera, Soratami Mindsweeper, and Meloku the Clouded Win Condition in hand at this point, so what do you do?

Rood chose to play Teller of Tales and pass the turn. He then lost part of his air force on the next turn when Pacifico cast Soul of Magma and Blademane Baku, using the Magma trigger to pick off Rood's Mirror-Guard in the process, and losing the Baku at the end of turn to a frisky Frostwielder. Rood then cast Ember-Fist Zubera on his turn, tapping Kami of the Honored Dead, before sending with his team. The attack cost Rood both his ninjas but got rid of Soul of Magma and dropped Pacifico back to 11. Yosei made a return engagement, again gumming up the board with power flyers on Pacifico's side. Rood attacked only with his little Zubera the next turn, looking to either draw a card or ninja a Mistblade into play. After the attack, Rood went for it, casting Meloku and preparing to rock the house. Pacifico did nothing more than recast his Kami and pass the turn pack.

A freshly drawn Petals of Insight tapped the Kami before shipping the cards to the bottom of Rood's library. Rood then cast a Zubera, tapping the Yosei and attacked, dropping Pacifico to four. The Honden pushed that back up to six, but Frostwielder knocked that that to five, and Rood had just enough damage the next turn after once again recasting Petals of Insight to tap the life-gaining Kami

While the players here were shuffling up for Game 2, the judges paused them to wait for the outcome of the C match. Tsang had just won his match, and Chambers and Nassif were tied at 1-1, so if Nassif won there would be no reason to play this one out, but if Chambers one, all eyes and cameras would turn to Seat B for the deciding game(s).

When Gabriel Nassif ran over Adam Chambers with green fat and removal spells in their Game 3, any thoughts of continuing play in the B seat became irrelevant.

Nova are the 2005 Pro Tour-Atlanta champions!