Now I know what you are thinking, but just because you haven't heard of Adam Chambers before this weekend don't assume this is a slam dunk for the much more experienced -- and Kobe jersey-wearing -- Gabriel Nassif. 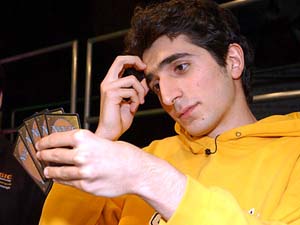 Would the fifth time be a charm for Nassif?

I was pretty familiar with the Albany product before this event because Ken Krouner has been hyping him for about a year as The Next Big Thing. Chambers lives in an emerging hotbed of Magic activity in upstate New York, rooming with lives with Tim Aten after having spent time in the same house as Krouner. This was only his second Pro Tour (his first came last year).

"I played in Seattle," he said with an uncharacteristic trace of a smile. "I played with Alex Melnikow and Jill Costigan. . .(fellow Alban-ians) . . .they went 1-7."

"I made the finals of my second Pro Tour too," offered Nassif recalling his loss to Phoenix Foundation in 2001. This was the fourth finals appearance for Nassif, yet still a sip from the victory cup eluded him.

"Hopefully once in my life I will win in the finals -- or at least have my team win," he said.

The two players chatted about team origins while they waited for the camera to swing their way. Nassif actually seemed anxious and looked around waiting for the cue to begin. Finally the lights started flashing, no one suffered any petit mal seizures, and the action got underway . . .

. . . Okay, not yet. In the feature match areas, the start of each match is staggered so it was back to small talk.

"So you were taking a chance with the draw," Nassif started. Chambers' team took a risky draw in the final round that could have easily found them in fifth instead of the finals today.

"--we can play?" The table talk was shelved and the action got going.

The two players played quickly and quietly. A Mirror-Guard slid into play for Chambers and Iwamori of the Open Fist. Chambers was unimpressed with the flashy rare and activated his Mirror-Guard to get in for five. Gnarled Mass joined the party.

Nassif made a five-point impression with the Open Fist and summoned a Scuttling Death. Chambers cracked back for three more in the air and tapped most of his mana to play Honden of Seeing Winds. 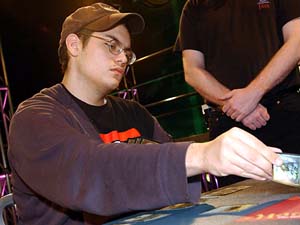 A first-game win boded well for Chambers and We Add.

Nassif came back with everyone. The Ronin traded with Gnarly and Scuttling Death was absorbed by the Traproot. Nassif needed time to think. He could sacrifice the Death to finish off the Traproot or kill the flier while Chambers' mana was tapped and his hand was not chock full of Honden cards. After a period of deliberation he decided to simply play Kami of the Hunt.

Chambers got two cards off the top and bashed for three. Forked-Branch Garami hit the board and was promptly Befouled by Nassif -- Chambers got back Gnarly. Everyone went in again and the Traproot absorbed Kami and Budoka traded with Death -- Nassif sacrificed the Death to kill Mirror-Guard but Adam had Kodama's Might to save it. From there things got out of hand with the Honden giving Chambers two cards a turn. There were abundant guys to gum up the ground while the Mirror-Guard just kept on coming and finally closed the book on the first game.

Nassif commented that he didn't remember that Chambers had the Traproot. A flicker of a smile played on Chambers face, "I took that Traproot Kami soooooo fast. I took it over something good too."

Nassif opened with Nezumi Cutthroat while Chambers had the Bluebera.

Nassif was holding Gnarled Mass but could not make a turn-three play because his mana showed up in the wrong combination. There were no such problems on the other side of the table, as Adam's Gnarled Mass showed up right on time.

Nassif had Kami of the Hunt but it had to step aside to let the Mass get by. Adam added a Soratami Mirror-Guard. Nassif swung with both into Zubera and the Mirror-Guard. Chambers took it and went to 12. Gnarled Mass finally worked something out with Nassif's mana and hit play only to trade with his counterpart on the next turn. Honden of the Seeing Winds for Chambers but no more critters.

Nassif kept up the pressure with both creatures, and this time the Floating-Dream Zubera jumped in the way. Nassif debated Sniper or Wear Away. He played the Sniper and Chambers got to draw two cards. He took Nassif down to 10 with the flier and played Tomorrow, Azami's Familiar.

Nassif was ready with Befoul for the Sylvan-esque blocker and shot the flyer. He had no green left over to smoke the Honden and Chambers ripped some more cards playing out a host of dorks .

Nassif was only getting one a turn but he liked what he saw, "That is pretty good here."

Nassif played Kami of the Waning Moon and then used Wear Away the Honden. His Kami of the Hunt became a 4/4 feared creature. Combined with the Cutthroat, it was enough to finish off Chambers.

"I'll play," announced Adam with no perceptible change in emotion from the game he won a few minutes earlier.

Both players kept and Chambers led with Budoka Gardener. Nassif had a Sniper but it was trumped by Matsu-Tribe Decoy. The Sniper looked frantically for something to do but he could no escape the red light of the rifle scope squarely on his chest for a change.

Chambers was not. He laid a Forest and put down the mirror-match critical Traproot Kami.

Nassif smiled and played Sakura-Tribe Springcaller. Decoy did not untap and Nassif let the Gardener through out of respect for Might but there was no play for Chambers. Nassif had no play of his own save Pinecrest Ridge.

Chambers activated his Decoy and swung in with both. "Before blockers," announced Nassif. He aimed Yamabushi's Flame at the Decoy. Chambers bounced it with Vortex and spliced Kodama's Might onto the Gardener.

Both players had four cards in hand -- we knew two of Chambers' and when he swung the Gardener in again on the next turn, Nassif thought about his play for a long time. The room was already pretty silent but suddenly you became aware of only the sound of Becker relaying life totals to the booth and the crew breaking down the set in the backroom. Finally Nassif blocked and Chambers burned his Kodama's Might.

"In response," announced Nassif as he aimed Horobi's Whisper at the Gardener. Chambers nodded and went back about his business with a Bluebera and the Matsu-Tribe Decoy.

Scaled Hulk came down for Nassif. Chambers was out of gas and had to block with his Zubera on the next turn for a card and reaped a Forked-Branch Garami. Nassif did him one better with Open Fist. All Chambers' deck offered was an Orochi Sustainer but Nassif's hand was still full of gas -- Befoul, Glacial Ray, and Wear Away. 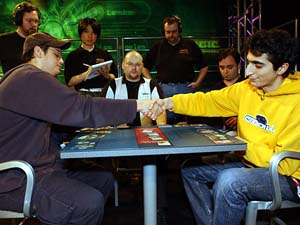 And with the handshake, Nassif and Nova became PT champions.

Chambers looked to be in a bad way -- judging by his board, of course. Looking at him it was no different than when he was bashing an opponent -- totally dispassionate. Nassif played Kami of Lunacy and a turn later drew into Kami of the Waning Moon and looked at his Scaled Hulk. He played the fear inducing flyer and thought some more before sending in the flying kami, Scaled Hulk, and Open Fist.

Now Chambers had to assess the situation. He put the Traproot in the way and took 9. It was Nassif's first damage and the score went to 11 to 10, barely in Chambers' favor. Chambers provoked both the Springcaller and Kami of Waning Moon. Nassif blocked as directed and was able to crack back for more than lethal damage.

Gab Tsang had already made extremely short work of Don Smith, and much to Nassif's surprise that win meant he had also won the Pro Tour.