Paper Scissors is a hometown squad with the man who first popularized the Rock, Sol Malka, at the helm. Malka, who as always been something of an internet darling for his musings on Constructed formats, has had his greatest success with 40-card decks when he defeated Jeff Cunningham in the finals of Grand Prix-Tampa '01. His wingmen -- presumably Paper and Scissors -- are PTQ regulars on the southern circuit. The three players have spent a lot of time playing together, and as result they qualified for this event on rating. 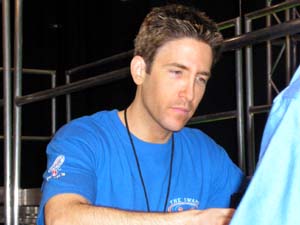 Sol was squaring off against Josh Ravitz, who was playing with the same squad that narrowly missed the Top 4 of Pro Tour-Seattle last season. Since reaching the Top 4 of Grand Prix-Chicago this season, the team has spent little time together. That is not to say they haven't practiced. Chris Pikula and Igor Frayman honed their game by practicing Team Sealed with Chris Manning in New York while Josh focused on the strategies of draft with his Jersey cronies.

Game 1 was not vary exciting as Sol kept a land heavy hand. Although he was able to use a Yamabushi's Flame to take out a Faithful Squire out of the equation before it could come online, he had no offense -- or defense, for that matter -- to speak of. Josh, who was very unhappy with the deck he had been saddled with, was able to 'overrun' Malka with a Kitsune Riftwalker, Kami of the Painted Road, and an Indebted Samurai.

The one turn where Malka was able to muster two creatures to block -- Kami of Twisted Reflection and Frostling -- Josh had Indomitable Will. Sol's next play was actually a turn-seven Ashen Monstrosity that was nullified with a Cage of Hands. Sol looked for a way out with Reach through Mists but he let the cards fall from his hand onto the table…land…land…land.

The Pikula/Chris Donohoe matchup was Pikula's Red-black to Donohoe's Green-black. Pikula had the early advantage with Hired Muscle, Kami of the Waning Moon and Wicked Akuba. The Hired Muscle was Pulled Under but Chris was still threatening to evade past Donohoe's green creatures and pile up some damage. An Okiba-Gang Shinobi snuck into play and Donohoe considered, "I am thinking about whether or not to concede here versus showing you my hand."

In the end, Pikula's Wicked Akuba was able to finish off the job within one or two pieces of spirit craft.

Igor Frayman had Cole Stewart out-manned eight creatures to two but his guys were small and being held off by a Mothrider Samurai. Igor whittled away and eventually the numbers favored an all-out assault.

Sol drew a raised eyebrow from Ravitz as they shuffled for the second game when he announced, "You can play." 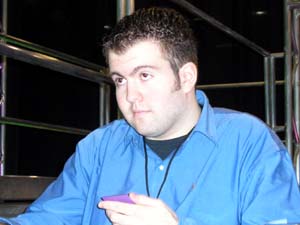 Josh Ravitz took Game 1, but then the suffering started.

Josh's eyebrow -- and the rest of him -- went slack as he promptly shipped back his opening seven which featured Genju of the Spires, Reverse the Sands, and five lands. Sol also went back for a fresh set but they both settled on six.

The game started out very slowly without plays for either team captain until Josh forged Tenzo, Godo's Maul followed by an Indebted Samurai. The Samurai was taken out by Yamabushi's Flame. Sol untapped and made a Frostwielder. Josh cast his Genju and was able to animate and equip to get in for seven points.

Neither player had anything going on and Josh's Kami of Tattered Shoji was countered with Hisoka's Defiance. The top of Sol's deck yielded Cunning Bandit. It started building counters when Josh played Kami of the Painted Road. Glacial Ray spliced onto Veil of Secrecy removed the Kami from the game with Frosty.

Sol's Brutal Deceiver flipped up Azamuki, Treachery Incarnate and there was nothing that Josh could do.

Donohoe had a commanding position with Genju of the Cedars, Seizan the Perverter, and Bloodthirsty Ogre in play. He Befouled one of Pikula's lands and the Meddling Mage was not catching up to the pounding from Donohoe's beefy guys.

Frayman's and Stewart's match was in the early turns and the game seemed to be progressing normally with both players trading guys and spells and no one out to an early advantage.

Josh kept a slow hand that put a third-turn Kitsune Diviner into play while Sol's first turn Frostling nibbled around the edges of Josh's life total. He added a Brutal Deceiver and Josh's Ronin Houndmaster stayed back to watch the gates. Frostling took out the Diviner end-of-turn and there was no attack from Sol, who sculpted a Jade Idol.

Josh -- hand to forehead in agony -- Cage of Hands-ed the Deceiver. Sift through Sands got the Idol in for four but did not find Sol a fifth land -- he discarded Higure, the Still Wind. Josh played the Kami of Tattered Shoji from his opening grip.

Sol's fifth land arrived and Sokenzan Bruiser came down -- presumably from the sideboard. Josh bashed in with the Ronin Houndmaster and Sol considered blocking but instead took the damage. Josh all but tapped out and moved the Cage over to the mountain walker.

Brothers Yamazaki and Neko-Te hit the board from Malka. Josh sent in the Houndmaster and Sol put two guys in front and lost, and traded them both when Josh had Call to Glory but the Houndmaster went with them.

The game was starting to teeter into stalemate territory when Sol put out Moonring Mirror. Josh's Honda's Katamoto took a Glacial Ray during Sol's main phase so he could get in for four with the Idol.

Josh enchanted a Mountain with Genju of the Spires and Sol emptied his hand by casting Mystic Restraints on the Kami of Tattered Shoji. Josh grumbled and had no attack. Sol tucked a card under the Mirror and said, "Go." Josh killed the Restraints and got in for six on the next turn. He had to leave the Kami on the watch for Jade Idols.

Sol was working his Mirror and lifted up a Frostling and Frostwielder from beneath it. He only had two red and played the pinger and equipped it with Neko-Te -- something Josh's deck had no answer for.

Josh animated his Genju and tried to get in with it but Sol used his remaining blue mana to animate his Idol with Reach through Mists. Josh replayed the Genju on his abundant lands with a posture that reflected his increasingly poor board position.

Things only got worse for Ravitz's spine when Pikula loudly announced, "I lost."

Sol was able to lock down every creature Josh played while "drawing" two cards a turn thanks to the Moonring Mirror and it was over shortly thereafter.

Cole Stewart had tied up their now-moot match but the sweep looked unlikely. Igor had him dead on the board during his next attack. The only way Cole could win is by attacking with everyone and hoping that Igor did not have the Consuming Vortex that was lurking in Frayman's hand.