Pro Tour Atlanta Round 10: Chicken Ranch vs. We Add

the set-up for this match is that the winning team MAY be able to draw into the Sunday action in the final round. Chicken Ranch can certainly draw in with a win since they came in with a draw in place of one of the losses on We Add's ledger. There looked to be a 24-point pile-up after this round, so a win for We Add did not necessarily mean they would be able to get a draw -- and they were not sure if they could even ask for one. Of course that was getting ahead of themselves because they still needed to get past the reigning World Champion and Rookie of the Year's team. 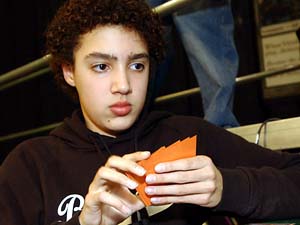 The World Champ stood on the precipice of another Top 8.

Julien Nuijten's squad was the third-ranked team coming into this round. Joining him were former Dutch National Champion Rogier Maaten, and GP Paris semifinalist -- and "old man" on the Dutch Magic scene -- Wessel Oomens.

Adam Chambers was lined up against Julien and the highly touted rookie was joined by former U.S. Nationals Top 8 competitor Andrew Pacifico and the proverbial "relative unknown" Don Smith. Their team was one of four to grind in at the LCQ tournament Thursday night, and were two rounds away from being the first players -- at least first players anyone around here can recall -- to reach Sunday action after securing their invite at the very last possible moment.

Both players were young, smart, and confident, and talking to draft reporter Teddy CardGame before this round's action both claimed decisive victory at the draft table. There was no trash talk once they reached the playing area though -- it was all business for these two.

Things started out with a mulligan for Chambers. He had a turn-two Sustainer which had to get its beat on turn three with no land. River Kaijin put a stop to that but a land allowed Sosuke to show up for his original turn four appointment. Eye of Nowhere sent the snake back from whence it came and the River Kaijin took back the point the Sustainer dealt earlier.

Threads of Disloyalty took the Sustainer but that was all the action the Dutch player had. Adam beat in for three and Kami of Fire's Roar joined the team. The Sustainer stood in for Julien's fifth land -- although it did nothing to address the lack of white mana available to the Dutch player -- and powered out Teller of Tales.

Adam looked at his hand, looked over the board, and double-checked his score pad against his opponent's, "What are you at?"

He had an explosive turn with Genju of Cedars. He animated it and used Kodama's Might on the Fire's Roar and made it so the River Kaijin could not block and dropped Julien -- who chose not to squander his 3/3 flier -- from 16 to 5.

Julien had no play and passed the turn. Adam submitted a Harbinger of Spring for Julien's approval and announced that the Teller can't block. Adam sent his guys toward the red zone. The River Kaijin blocked Fire's Roar and Sustainer chumped Sosuke.

Julien attacked with Teller and passed the turn holding Consuming Vortex. Adam went to shove his guys into the red zone but instead decided to leave back the Fire's Roar after almost pushing him toward the red zone. Julien bounced the Sosuke and Adam replayed him.

The Teller came over and untapped courtesy of Jetting Glasskite. Adam attacked with Cedars and Sosuke. Julien chump blocked Cedars with the 1/ 4 and fell to two. He added an Eggwatcher to the board.

Julien's Teller swung in for three more and the Dutch player sat back on another Vortex. Adam thought about his turn and used Commune with Nature to find the lyrical Kashi-Tribe Warrior. He animated his Genju and went to attack . . .

Julien thought about letting him attack but decided to bounce the Cedars and tap Sosuke. Adam shrugged and sent in the Eggwatcher and Fire's Roar. Glasskite blocked the spirit and Adam let the snake pass. He went to adjust life totals and Chambers remained impassive, "Take two?"

Julien looked over at Sosuke, back at the Eggwatcher. He dropped the pen he was about use to tick a point of life off and began shuffling for Game 2.

Don Smith took the first game from Wessel while Rogier did the same against Pacifico.

Julien found the Plains that eluded him last game and he led with Devoted Retainer followed by Cloudskater. There was no turn-three play for either of them and Julien beat with his 1/1s. Turn four was similarly blank for Julien but Adam busted out Seishiro's son Sosuke. Julien used his Cloudskater twice looking for Cage of Hands at the end of the turn. 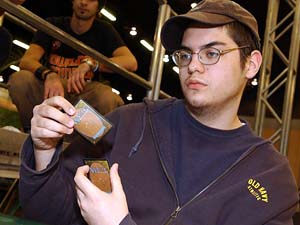 Chambers had the goods to take down The Champ.

The flyer came in for one and the Champ laid down a Ronin Warclub. Harbinger of Spring came down for Adam while Julien tried to stabilize behind a Callow Jushi. He put Phantom Wings on one of Adam's men and held a Consuming Vortex for another. Adam drew the arcane bounce spell from the Champs hand with Kodama's Might. Adam moved quickly to his second main phase and slammed Mindblaze on the table.

He looked through the Champ's deck to make sure the second Vortex was still there. He nodded when he saw and dropped the deck to the table, "Good game."

And with that he was gone.

Rogier won his match in two games. Wessel had tied up their match and the third game was under way. Don Smith had taken control of the game with multiple ninjas, Minamo Sightbender, and the dreaded Split-Tail Miko. He also had a Soratami Rainshaper and Kitsune Blademaster to complicate matters. Smith played the game ultra-conservatively and only attacked for sure damage with evasion. Whenever Wessel had a window to get in some damage, it involved running at least one of his guys into a Blademaster with Split-Tail back-up.

In the end, the only out for Wessel was Unearthly Blizzard and Strength of Cedars but even if it had come up, Smith was ready with the Hisoka's Defiance.

Final result: We Add won the penultimate round 2-1 against Chicken Ranch. They were in an excellent position to become the first Last Chance Qualifiers to reach Sunday.