is it folks, the best players in the world laying it all on the line for a shot at the Top 4, thousands of dollars and another entry into the Magic annals of history riding on the results of you and your two good friends. In this case we have Player of the Year Gabriel Nassif and his cohorts David Rood and Gab Tsang facing off against Pro Tour-Nagoya champion Shu Komuro and teammates Ichiro Shimura and Tomohide Sasagawa. Nassif, Rood and Shimura all have previous Team Limited Top 4s to their names, so there's a lot of experience and star power in this huge elimination match. 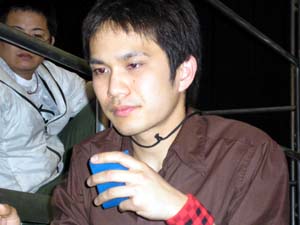 Gatas Brilhantes' fate lay in the hands of Shimura.

The draft went as expected for both teams, though it looked like the French Canadian connection may have come out ahead in overall deck power. Talking to Mike Turian, who did the draft analysis, he felt the five Hondens that the Japanese team drafted would come up huge here and perhaps give the match a nod in their direction.

Both players got out of the blocks quickly in Game 1, using all their mana on turns 2, 3, and 4 to throw down a horde of guys that did little more than stare at each other from across the field of battle. Honden of Night's Reach came down to make sure Nassif couldn't stockpile any removal, but Ornate Kanizashi gave him a chance to earn card advantage a different way -- by playing from the top of Shimura's deck as well. Shimura got his beat on with a Kami of Ancient Law and Kitsune Blademaster before Nassif Caged the samurai. Nassif's Villainous Ogre fell to a Kitsune Healer plus Indomitable Will, and Kami of Ancient Law freed Kitsune Blademaster to return to duty, while Nassif played He Who Hungers and then went to work with the Kanazashi.

A flipped Devouring Greed plus an attack from He Who Hungers (not to be confused with Hee-haw) evened the life totals at 14. Nassif was surprisingly uncertain of his plays in this match, waffling about some responses to Shimura's spiritcraft triggers from Kamis of the Waning Moon and Painted Road.

Aside from the Greed, the Kanazashi was whiffing, giving Nassif extra lands but nothing else. While Gab was whiffing and glutting on lands, Shimura was using combat tricks to whittle away at Nassif's board. Cage of Hands flipped off the top of Ichirou's deck, but Nassif had to be content merely to remove it from the game, having drawn a Gutwrencher Oni last turn and lacking enough mana to cast both. Kabuto Moth flipped over, and this time Gabriel was happy to cast it plus Ashen-Skin Zubera, further clouding an already muddled board. At this rate, should the game come down to decking, Shimura would definitely lose, because Nassif was burning through his deck, getting solid card after solid card. 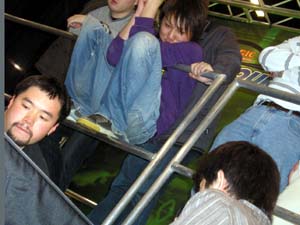 The crowd gathered as the final matches crept along.

While this stalemate was occurring, David Rood went up a game against Komuro, giving Nova an early lead in the match, but one that was swiftly erased by Lure on Cruel Deceiver that won Sasagawa his Game 1. The madness continued here in Seat C, as Sensei Golden Tail, Split-Tail Miko, Honden of Cleansing Fire, and Waxman Baku all joined Nassif's enormous army. The little sensei that could started adding bushido counters to the Gutwrencher, soon making him impossible to block efficiently. It was nice of Shimura to draft such a good deck for Nassif to exploit, especially when Gab was considering not even running the card until his teammates encouraged him. Shimura asked how much time was left in the round and quickly packed it in, hoping to stop drawing land while Nassif got to play his spells in Game 2.

Nassif was color-screwed early in Game 2, while Shimura curved right through Kami of the Ancient Law, Kabuto Moth, Kami of the Waning Moon, and Honden of Night's Reach. Nassif finally drew his first Plains on turn five, and then used to cast Gutwrencher Oni with a big fat frown on his face. The demon fell to the Kami with a little help from the Moth and Hundred-Talon Strike, putting Nassif in a gaping hole that would be difficult to climb out of. The reigning Player of the Year tried hard, but to no avail, evening this match at 1-1 and matching the scores of all three matches in this crucial tie.

Nassif kept a hand with both Swamps and Plains for Game 3, playing Kitsune Diviner and Cruel Deceiver on turns 1 and 2. 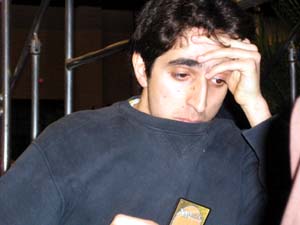 Pondering every move, Nassif hunted for a spot in Sunday's Top 4.

Cage of Hands was the play instead, but Nassif kept mashing with the rest of his crew looking to put this one in the bag quickly. Shimura had no real plays aside from a Honden of Night's Reach on turn four, but Nassif plucked Ornate Kanazashi right off the top, just in time to cast it and allow him a huge game win and a boost into the Top 4 -- until a second Honden hit the board for Shimura, this time of the Cleansing Fire variety. Uhhhhh oh -- this one could go long again. While all this was happening, David Rood defeated Komuro 2-1 to put Nova up a match.

Shimura followed the Honden lead with two mediocre Kami five-drops, while Nassif again displayed his skill in flipping good cards off the top of Shimura's deck, grabbing a Kami of the Waning Moon and Split-Tail Miko on consecutive turns after playing a Gutwrencher Oni of his own.

"You win, Nassif" came the report from Aaron Forsythe. "That's okay," replied Nassif, "I'm winning this one too."

The board again degenerated into a massive stalemate until Nassif flipped over Blessed Breath from Shimura's deck right as time was called, allowing him to attack for 16 and complete the sweep.

Nova are off to Sunday's semifinals!