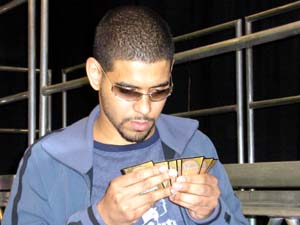 Dave Williams is so fresh and so clean.

of these players have made final tables recently -- Dave Williams at the Bellagio in December, Frank Karsten at the draft table in Nagoya. Williams admitted that this Pro Tour is a bit of a Prerelease for him, as he'd seen no Betrayers of Kamigawa cards prior to this weekend's festivities. Dave's teammates (Bob Maher and Neil Reeves) have also mostly retired from the game, but they are still qualified for the Pro Tour on rating and keep making Day Twos, in spite of the fact that they don't play very much anymore. Karsten's team is the other end of the spectrum, with Ruud Warmenhoven and Bram Snepvangers strong players in the Dutch movement to take over the Magic world.

Game 1 started well for Karsten with a Split-Tail Miko followed by Kabuto Moth and Isao, Enlightened Bushi. Williams was fine with that though, as he burned his way through Karsten's men, shipping all but Kami of the Painted Road to the yard even though he was stuck on three land. Williams finally started to draw some land and cast Fumiko the Lowblood plus a Frost Ogre, mounting a solid defense now. Master-Tribe Decoy tapped down Fumiko before going to the graveyard. Unfortunately for Karsten, that was the last useful thing one of his creatures did, as Fumiko decimated his team until Williams felt safe, and then Fumiko plus an Ogre Recluse finished things off.

Reeves declared that he had lost his match from the B seat, and Maher told his teammates that he was down a game as well, prompting, "You boys gotta get it together!" from Williams.

Williams began game 2 with a very lonely Goblin Cohort, giving him opening to start this rant, "I told Neil this guy wasn't any good, but he's like 'No, it's good. Play it.' I haven't even seen this set, but it clearly looks bad. He said 'but it can block.' I don't like to block, Neil... I've been sideboarding him out, but I won that last game and forgot he was in the deck." 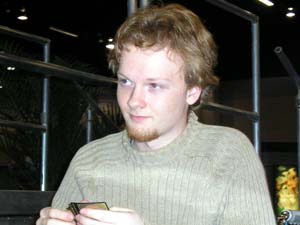 Karsten's teammates picked him up.

So the Cohort was rather underwhelming compared to Karsten's Budoka Pupil, two Rootrunners, Waxmane Baku, and a Taproot Kami. The Pupil flipped with three counters on it and that was that -- a heavy land draw from Williams never really let him get in the game.

Unfortunately, the third game was rendered moot when Maher declared that he lost his match as well, giving Snert the match. Williams was left playing for pride.

Roar of Jukai splicing Glacial Ray and utter smashings were the story of the pride game. Williams demolished Frank's resistance with burn and some combat tricks pushed fat through the red zone like he was shipping freight straight at Karsten's dome.