Pro Tour Atlanta Round 3: :B versus Shonichide Pon

and Shonichide Pon were undefeated after two rounds but the teams expected nothing less than perfection. Who can blame them? Shonichide Pon features Mashashi Oiso, Katsuhiro Mori and Masahiko Morita. A few of the best Japanese players at this event. Oiso has placed in two Top 8s in the past year and just recently won Grand Prix-Boston. They didn't know it yet but they would be facing off for the first time against :B. The team of Tim Aten, Gadiel Szliefer and John Pelcak won the Team Grand Prix in Chicago and finished in 7th at Pro Tour Seattle. 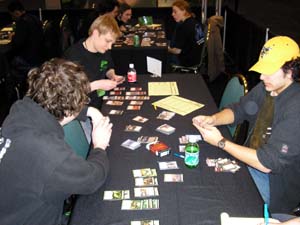 :B grabbed for colors during their deckbuild.

During deckbuilding, the Americans started off by each grabbing a color. Aten took the blue cards, Szliefer the white cards, and Pelcak the black cards. Pelcak was none too happy when his teammates started talking about Dampen Thought making a threat into the air.

"I'll shoot somebody in the face if we play Dampen Thought," he said, and then quickly began searching through the pile again trying to find an Umezawa's Jitte.

The lack of two drops for the American team made the color split a challenge. After grabbing the initial colors they tried out having Aten with a blue-green deck, Pelcak with red-black, and Szleifer with white. The Red cards in their pool were exceptionally good. They had picked up two Torrent of Stone, a Hanabi Blast and a Red Honden.

Shonichide Pon immediately pulled out a red-white deck for Oiso. With two Waxmane Baku, two Indomitable Will, a Glacial Ray, a Yamabushi's Flame and a Torrent of Stone. The red-white deck seemed like it had the makings for a quality deck. When they tried to split black it wasn't coming together right, however. The Japanese were lucky enough to open a Kokusho, the Evening Star but just needed to figure out which deck it belonged in.

Shonichide Pon's second attempt saw Oiso having a red-black deck and Mori playing blue-white. This wasn't working out for them quite right either. Finally, they hit upon the solution. Oiso played red-green, Mori blue-black and Morita white-black. Morita got to play with Kokusho while Mori had some strong removal to go with his ninja attack! The final swap the Japanese made was to give Dance of Shadows to Morita. Morita now really wanted to play against non-black mages in order to best take advantage of the Dance.

Tim Aten brought a white -blue deck to the feature match area. It featured three Ninja of the Deep Hours, Hikari, Twilight Guardian and Myojin of Cleansing Fire while Mashashi Oiso decided to play red-green. Normally, white-blue is the favorite when these colors face off, but Champions of Kamigawa leads Aten's deck to be more aggressive in nature so the usual archetype breakdown doesn't necessarily apply. If Oiso's removal can take over, he should win this matchup.

In the other matchups Gadiel Szleifer black-green deck played versus Katsuhiro Mori with blue-black and Pelcak's red-black deck faced off versus Masahiko Morita with black-white.

Aten played a second-turn Samurai of the Pale Curtain to shut down the Goblin Cohort that Oiso had played on turn 1. Bushido is a very strong combat ability, and Oiso would need to clear Aten's creatures out of the way in order for his beaters to get through. 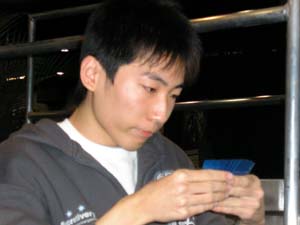 Oiso thought for a minute on the second turn but didn't end up playing anything. Aten attacked for 2 and played a River Kaijin. Honden of Infinite Rage came down for Oiso but his lone Goblin Cohort had yet to find a buddy.

Aten just passed his fourth turn while Oiso used his fourth turn to play a Frostwielder. In combination with the Honden Aten's Blue White deck appeared as if it could be in trouble. Aten once again swung with the Samurai and used Phantom Wings to buy himself a turn against Oiso's Frostwielder.
Samurai of the Pale Curtain kept swinging for Aten. At six-mana all he could manage was a Soratami Cloudskater. The Cloudskater died to the Honden but Aten used his ability twice before it was removed from the game.

Oiso built his board position with Isao, Enlightened Bushi. Aten played out a Mystic Restraint on Isao. Oiso kept Aten's board clear using Frostwielder and the Honden time and again.

Combined with attacks from Goblin Cohort, Kami of the Hunt and Lifespinner even a Moonlit Strider couldn't save Aten from death.

In the other matches, Morita had out two Waxmane Baku to tap down Pelcak's entire team of creatures and swing for the win in Game 1. Only Szleifer's match versus Mori gave :B any glimmer of hope versus the Japanese powerhouse, but even there a Kira, Great Glass-Spinner was making Szliefer's life difficult.

Aten led with a Kitsune Diviner followed by a Soratami Cloudskater. Oiso played a Kami of Hunt and a Gnarled Mass while Aten played a Moonlit Strider. The Kitsune Diviner was doing good work for Aten as he kept the green force of Oiso's at bay. A Kitsune Blademaster on Aten's side helped big time versus red-green. Oiso didn't play anything on his fifth turn. Did the Japanese champion have a trick up his sleeve? 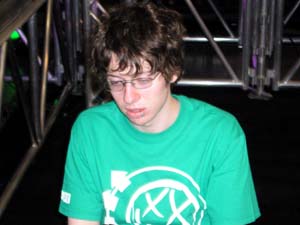 Aten fought back in Game 2 to even the match.

After Aten attacked for three and played a Samurai of the Pale Curtain, Oiso revealed a First Volley he had been holding, but Aten used his Moonlit Strider to protect the little Diviner that was under assault.

Aten's air assault could not be halted even when Oiso played a Sosuke, Son of Seshiro but the Sosuke did a good job of holding the ground until a Mystic Restraint let Aten's ground forces free once again.

Mori had rode Kira, Great Glass-Spinner to victory in Game 1 and won Game 2 in just minutes as he curved out versus Szleifer's poor draw. :B would now need to win three straight games if they hoped to take the match.

Aten started the game with Kitsune Diviner and Kaijin of the Vanishing Touch but neither were a match for the Honden of Infinite Rage and Frostwielder that Oiso had drawn again. Oiso picked off the Diviner, followed by a Kitsune Blademaster. Then he laid down an Ogre Recluse. The Recluse was sent home when it killed the bounce wall but Oiso just cast it again. Aten had managed to keep a Moonlit Strider and River Kaijin on the table but both were puny when compared with the Recluse.
Aten bought himself a little bit of time by playing a Mystic Restraint on the Frostwielder. This not only locked down the Frostwielder but also kept the Ogre under control for a turn.

Oiso's draw continued to look like the draw he had game 1 when he played out Isao, Enlightened Bushi. Aten sacrificed a Soratami Cloudskater in order to dig through his library. Lifespinner and Frostling joined Oiso's team while Aten was only left with a hopeless look on his face.

Pelcak had just gone off with splice spells to win game 2 of his match, but with Aten's loss, :B went down to Shonichide Pon.