various iterations of Shop Fireball have probably achieved the most fame and prestige of any Japanese team. Their only competition for the "Greatest Team" moniker comes from P.S. 2, but Fireball's leader Itaru Ishida is the undisputed Japanese master of Team Limited, and is considered by many to be one of the top Team Rochester players ever. Their opponents for this round are Ligers, otherwise known as Brian Kibler, Eric Froehlich, and Ben Stark. Contrary to popular belief, Dragons remain Brian Kibler's favorite animal, but Ligers are a close second. 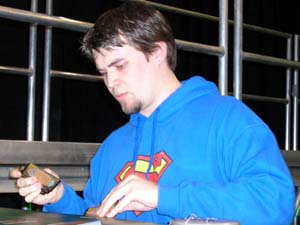 Kibler got stuck on land early in game 1 and even when he did draw lands, they were all Swamps, stranding removal spells and kids in his hand and forcing him to play measly two-drops. Jin Okamoto was unable to capitalize on this fact, however, hard-casting Ninja of the Deep Hours on turn five with an embarrassed shrug.

Kabuto Moth improved the situation for the Last Emperor, stabilizing the board and making the Ninja very problematic to block. Cage of Hands on Scuttling Death left Kibler with no useful creatures, so Brian was forced to sacrifice it and soulshift back Cruel Deceiver. Yamabushi's Flame on a tapped Moth taught the little spirit the dangers of playing with fire, but Jin had a lot more action where that came from, using Eye of Nowhere to bounce Kibler's blocker, drawing a card, and then playing Opal-Eye and Teardrop Kami.

Kibler fought back, replaying the Deceiver and a Ronin Houndmaster. Play paused for a judge question when Okamoto cast Moonlit Strider. Kibler wanted to know how Sickening Shoal interacted with something before Moonlit Strider could protect Opal-Eye. Finding the answer he needed, Brian remove Dance of Shadows from the game and sending Konda's Yojimbo to the grave.

Ogre Recluse made quick work of the Ninja and Teardrop Kami before going to the grumper as part of a triple block with the Strider, but Kibler cast Scourge of Numai to keep the pressure on. Teller of Tales for Okamoto evened the board again, in a game that had a lot of action, but almost no changes in life totals thus far. Kibler attacked with his squad, trading the Scourge for the Strider (combined with Teller of Tales) and dropping Jin to fourteen. 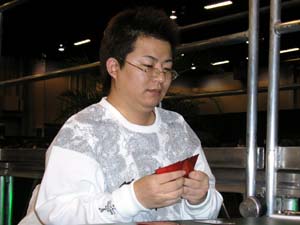 Froehlich and Stark had already finished their matches at this point in the game giving the Ligers the match, as spells and attacks had again cleared the board in this game. Okamoto's hits kept coming and Kibler simply scooped that game, lacking any real gas to combat Jin's fresh ninja, Moth, and Soratami Cloudskater.

While shuffling for Game 2, Kibler briefly discussed the origins of his team name with former roommate Brooks. "My favorite comment thus far about Napoleon Dynamite came from Efro who said "That movie, it just seems awful to me -- they just made a movie about Tim Aten?"

Game 2 in the match proved how completely insane Okamoto's deck was, seeing him cast two Teller of Tales this time to go along with his two Kabuto Moths, two Ninjas, Opal Eye, two Terashi's Verdict, etc. etc. Kibler did a lot of work to try and hang on, but Okamoto was in control the entire game, smashing the Dragon Master and forcing Brian to admit that it's nice to have teammates. Before you could turn around, both Froehlich and Stark had dispatched their mighty Japanese opponents.