tidbit about Anton Jonsson. Despite being one of the game's top Limited players -- I know that the term "top Limited player" is an overused Feature Match staple but we are talking about the very tippy-top here folks -- Jonsson has never once made Day Two of a Team Pro Tour. Last season he took the all-star route with Nicolai Herzog and Tuomo Nieminen to no avail. He decided to play with friends from Sweden this time out, hoping for a better result. 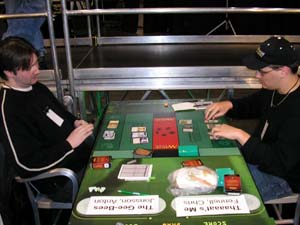 Fennell, right, wasn't happy when he saw his opponent.

After four rounds of play, Anton, Thomas Rosholm, and Johan Sadeghpour were facing an elimination match at 2-2. Their opponents were Thaaaat's Me, last seen together when they were winning Grand Prix-D.C. U.S. National team member Bill Stead may be the most well-known member of this team, but when it comes to team events it is all about Charles Gindy. Gindy has played in three different Grand Prix with a different set of teammates each time. His worst finish are finals appearances in Pittsburgh and Chicago, with the win in D.C. sandwiched in between.

"I don't know who this team is but they must be good if we are getting a feature match!" Chris Fennell announced to his teammates as he ambled into the feature match area. Bill Stead nodded over to where Fennell would be playing -- and where Anton Jonsson was already seated and ready to go.

Anton and Fennell chatted about their evenly divided fortunes and misfortunes over the first four rounds. Anton was just happy to still be playing.

"Our last decks were really bad," he said.

Anton kept a 5-land hand on the draw and led with Kitsune Diviner followed by Minamo Sightbender. There was nothing but land for Fennell on the first three turns and the Sightbender got in unopposed for one.

The Diviner was pretty useless against a turn-four Order of the Sacred Bell, as was Anton's turn-four Moonlit Strider -- who took four on the next turn. Chris added a Sakura-Tribe Springcaller to his menagerie and smiled at Anton's one-drop.

"That spirit guy is really doing his thing over there."

Anton had more land and passed the turn back with a trademark frown. Kitsune Diviner continued to underachieve when Fennell dropped Seishiro the Anointed and sent his Order and now-huge Springcaller into the breach.

Anton chump-blocked it with Diviner.

Anton played his sixth land -- he was holding three more -- and put Phantom Wings on Seishiro. Moonlit Strider blocked the soon-to-be 2/4 and Anton fell to eight from the Order. Chris had enough mana to play Seishiro and Orchid Sustainer. He attacked with everyone and Anton fell to one. Nothing on top could help him and they went to Game 2. Chris was also holding Sosuke in his hand when the game ended.

Anton led off Game 2 with Isamoru, Hound of Konda. He got in for four with no play from Fennell. Anton stalled on two lands and had Soratami Cloudskater on turn three. Chris kept the Hound at bay with his Ronin Houndmaster and Anton could only get in for one the next turn. He did have a third land for Kitsune Blademaster. 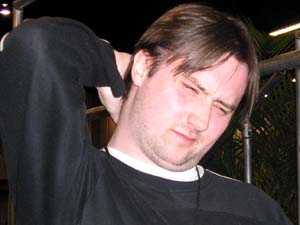 Chris showed off the Sosuke he had held back last game but Anton was ready with a Cage of Hands. He attacked with Blademaster and the flier and snuck a Shinobi into play to return the red samurai. Chris replayed the Ronin and added Frostling to the mix.

Anton only sent in his Blademaster -- no blockery from Fennell -- and followed up with Moonlit Strider. Fennell used Frostling on the Blademaster and tried to finish it off with Yamabushi's Storm. Moonlit Strider took the hit instead. Fennell also played a Sustainer.

Anton replayed the Cloudskater and dug for a card -- nothing to write home about. Chris used Commune with Nature on his turn and hit a Matsu-Tribe Sniper -- worth at least a quick postcard. The Sniper was giving Anton problems as his Blademaster had been about to slip into a pair of Phantom Wings, but had to use them to bounce the Sniper instead. He sent in the Blademaster and flyer. When the Houndmaster stepped in the way, Fennell had the Kodama'a Might to save it. Anton clucked his tongue and summoned Split-Tail Miko.

Fennell's Sniper returned to the field of battle and was joined by an Orochi Leafcaller. Anton's Cloudskater got in for one and Anton's small guy army picked up a Minamo Sightbender. Chris's guys were pretty small too but not after he played Seishiro, the Anointed next turn and sent Ronin Houndmaster and a pair of 4-power card drawing snakes into the red zone.

Anton looked for the right blocks and could not make up his mind…Chris was at six. He activated his Cloudskater and discarded Terashi's Verdict -- which drew a chuckle form Fennell, "I'm gonna write that card down." In the end he decided to take eight out of a possible ten thanks to Miko and allowed Chris to draw two cards.

Gindy defeated Johan two games to zero, which brought some amount of pressure to bear on Anton's decision-making process. Anton weighed his options and enchanted his Plains with the appropriate Genju. All he could see fit to do was get in for one with the Cloudskater.

Chris untapped -- "Stupid Genju" -- and looked over the board. He had one more snake than he had last turn after using the Sustainer to power out The Anointed the previous one. He bunched up his Ophidians and entered his attack step -- tentatively pushing his three 4-power guys onto the red zone on the playmat.

Anton activated Genju and made his blocks. Hound and Sightbender in front of Sniper, Genju in front of Sustainer, and no blocks on the Leafcaller. He saved his hound with Split-Tail and when you factored in the life gain it was only two points of damage and a card. Fennell wasn't out of snakes though -- not by a long shot. He conjured up an Orochi Eggwatcher after a Ronin Warclub.

Anton was out of steam and could only peck in for one with his Cloudskater and pass the turn. Chris attacked with everyone -- maybe -- and then considered leaving the Seishiro back. Finally he sent them all in. Now it was Anton's turn to think. He activated the Genju and looked at his potential blocking outcomes.

The game was so close for Anton and he could feel it slipping away, "And you are at five, right?" 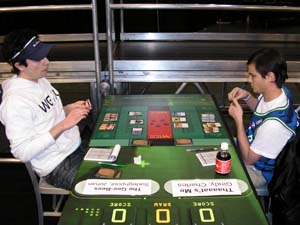 Bill Stead cut through the silence of the Anton/Chris matchup, "Chris, this is not going well . . . if you can win, that would be great."

Anton announced that he had only one out remaining in is deck -- Genju of the Falls. He drew a Rainshaper and slumped. Chris announced, "I have a lot of damage next turn."

Anton did not understand why the American player had given him so many turns with the Cloudskater rather than just shooting it with the Matsu-Tribe Sniper -- and for that matter why he was willing to trade the Sniper.

Fennell shrugged and showed him Gale Force. "I was holding this the whole game," he said. "I was hoping you would play another flyer."

Final result: Thaaaat's Me defeats Bee-Gee 2-1, knocking Anton's team out of contention for Day 2. The Gindy-Stead-Fennell crowd still needed to win their final round if they wanted to get through into Saturday's action.