the close of business Friday, these were the last two teams with undefeated records. As such, they had a 9 a.m. appointment in the feature match area to narrow the undefeated to one team. Boat was sporting a spotless record at 6-0. While Les Baltringues de Ludipia were undefeated as well, there were some streaks in the shine on their record at 5-0-1. They took a draw in the first round but have been tearing it up ever since. 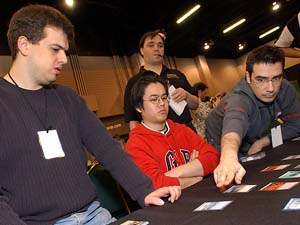 After the draft was over, Boat did not like their chances of staying afloat as the only undefeated team. Rui, who had drafted a speedy red-black deck that was low in the toughness department, was facing off with Camille Fenet's green-black monstrosity featuring Kodama of the South Tree and Hideous Laughter.

"I guess my match is winnable but it is not very good for me," Rui pulled a Heartless Hidetsugo from his deck with what he hoped looked like optimism. "I have this guy and a Devouring Greed."

Tiago Chan was philosophical about the draft which saw Frederico's opponent get handed Meloku the Clouded Mirror and Uyo Silent Prophet in back-to-back packs. "They opened almost all the bombs," he shrugged and showed off his Keiga the Tide Star. "We started good."

Their team drafts together regularly and has been qualified together for years although scheduling conflicts have kept them from playing most times. Their plan coming into the draft was to be flexible and let their opponents' cards be their guide.

"I think this format is really reactive," explained Bastos. He added with a smirk, "Although what we should have done was choose Seat 2 so we could have opened all the bombs." 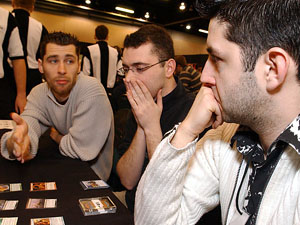 Les Baltringues de Ludipia is a French squad with Benjamin Caumes at the center of it. Ben is a solid French Pro who is often overlooked in the recent flurry of French success stories. His last major accomplishment was his quarterfinals clash with Jon Finkel in Yokohama. Since then, he and Nicolas Bornarel have busied themselves with running the game store Ludipia in Clermont-Ferrand, France that is the latter-half of the team name. The former half roughly translates to . . . well . . . I guess "bathhouse" is as close as I can get.

Nicolas has played in 10 Pro Tours and this is the first time he has had to wake up early on Saturday. In addition to qualifying consistently for the Tour, Nicolas has multiple high finishes in European events and -- he added with a smile, "I won a Prerelease tournament."

Among Nicolas' multiple Pro Tours are a few Team Pro Tours. Benjamin and Nicolas have played together a few times with a different third without much success and turned to Pro Tour first-timer Fenet to change their luck. When asked how Fenet was holding up, Nicolas smiled in Benjamin's direction, "He went 5-1 yesterday -- better than this guy."

As they say down, Bastos took a deep breath and said a little prayer, "No bombs, please."

Frederico's deck was capable of some very fast starts and would be in good shape if he found an early Soilshaper. He had abundant spirits and arcane to abuse the card but the long game favored Caumes who was the beneficiary of Meloku and Uyo.

Split-Tail Miko was the initial play from Benjamin while Frederico had a Minamo Sightbender. The Portuguese player followed with Kami of Twisted Reflection while Ben sat back on his healer. Glasskite showed up on turn four for Caumes and Bastos' Burr Grafter meant he could get in for three. 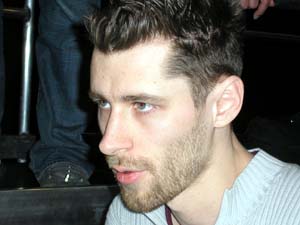 Caumes had Meloku on his side.

Turn five was exactly what Bastos did not want to see happen on the heels of his slow draw. Caumes flew in for two and tapped out for Meloku. Frederico got in for five with his B-team and hoped he would have time to find some answers with his Honden of Seeing Winds. The fliers came over for four and Benjamin left a freshly-baked Kami of Tattered Shoji and one white to activate his Split-Tail.

Bastos passed his turn without incident and fell to nine on Caumes' next attack. Soratami Mirror-Guard joined the air force and the game was over one turn later.

Rui took down Game 1 from Camille while the match between Tiago and Nicolas saw red and blue dragons clash. Nicolas and the red dragon took that game.

Frederico's hand for the second game looked much more exciting than the one he kept last game. This one featured Soilshaper, Kami of the Hunt, and two lands. Soilshaper attacked into Split-Tail Miko on turn three and the Frenchman -- who had mulliganed -- chose to block. Frederico saved it with Kodama's Might. Neither player had a third land and Caumes followed up with Kitsune Diviner.

The players laughed as they stuck on two lands for several turns. Frederico was able to play Matsu-Tribe Sniper and two Minamo Sightbenders but could not find land number three. Benjamin's land started showing up and he had Waxmane Baku and Shimmering Glasskite for back-to-back turns -- he missed a counter on the Waxmane through.

Finally, a third land arrived for Bastos, who ultimately decided to tap down the Glasskite for a turn by making it unblockable and then shooting it with the Sniper. This left him without mana to do anything else and contented himself with getting in for one with a Sightbender.

Kabuto Moth came down for Caumes, who was so concerned with everything else on the board that he missed a Waxmane counter for the second time in the game. Land was flowing for Bastos now and he was able to play Kami of the Hunt and animate an Island. He attacked with everyone -- after shooting the Moth. Benjamin fell to six.

Benjamin shook his head as he played Meloku, "I think you have this one."

It's hard to accept that you might lose with this block's Morphling in play, but that was how the game was looking. Frederico shot the legend, played Burr Grafter, animated a land and attacked with everything after his Kami was tapped by Diviner. There was not a good block for the Frenchman although he did make an honest effort. Frederico simply used the Grafter on one of the unblocked creatures and the Frenchman smiled, "I had to try."

Nicolas made very short work of Tiago and overran him with his black-red deck. Rui and Camille played one game in the time it took Bastos and Caumes to shuffle and tied up their match. By the time they were ready to play their match took on extra meaning as Rui won a fast Game 3. His match was the one they did not anticipate winning and suddenly the rubber game between the former Pro Tour Top 8 competitors was also the rubber game for their team's match.

Game 3 got under way with a turn-one Genju of the Fields for the French player followed by a Floodbringer. Things were looking good for Bastos with a turn-two Soilshaper. Caumes got in for three with Floodbringer and his Genju with no turn-three play.

Kami of the Hunt came out for the Portuguese team and Soilshaper got his beat on. Shimmering Glasskite joined the French end of the table. Kami of Twisted Reflection meant that Kami of the Hunt and a land could come over for six.

Caumes got to swing back for three in the air and attempted to hold the ground with Kami of Tattered Shoji. Bastos was ready with Consuming Vortex and bounced the 2/5 on his turn. He also played Child of Thorns and with two animated lands and a 4/4 Kami of the Hunt attacked for thirteen.

Caumes had to think long and hard about his turn. He settled on animating his Genju and attacking. He went to adjust life totals and Frederico put up his hand to stop him. He was considering a chump block with the Child of Thorns -- and then fizzling the life gain by bouncing or sacrificing it. He did just that and used his Twisted Reflection to bounce the one drop.

Child of Thorns came back down and Frederico pushes all of his men into the red zone. Now it was Ben's turn to back things up. He used the ability from the Floodbringer to tap the animated Mountain. Bastos was technically backed up into his declare attackers step but simply left both of his other men tapped in the red zone. Glasskite ate the Soilshaper and Floodbringer stepped in front of the oncoming Kami -- Blessed breath saved the 1 /2 flier.

Benjamin activated his Genju twice on the next turn to gain four precious points of life.

Scaled Hulk from the Portuguese player preceded an attack with his now 3/3 Kami. Caumes double-blocked and Bastos used his Child of Thorns to save it. The score was 11-6 in Bastos' favor but the game's momentum had swung around to the French side of the table and a Soratami Mirror-Guard came down for the deliberate Caumes. 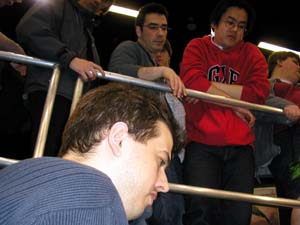 A full Boat looms over the rail.

With Rui and Nicolas looming on the rail, Bastos played Sosuke, Son of Seishiro and passed the turn hoping that he could draw one of his Sightbenders to push his Scaled Hulk through for a truckload of damage before Caumes tapped five or six mana.

Five mana from Caumes could only mean Meloku . . . well, it could mean Hundred-Talon Kami but it didn't. It was Meloku. Bastos sent all three men into battle and Caumes made three spirit tokens to chump block them. Bastos used a precious Reach through Mists to dig one card deep but held back a second.

The Frenchman was able to crack back for six and when the reserve Reach found nothing and Ben showed a willingness to block everything they shook hands and turned their attention to getting ready to start all over again next round.

Final result: Les Baltringues de Ludipia sinks Boat two matches to one to remain the only undefeated team in the tournament at 6-0-1.