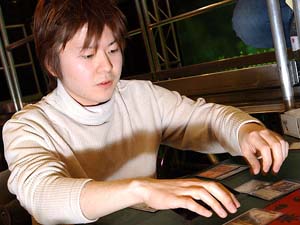 When you're a PT champion, apparently you glow.

this point, Shu Komuro needs little introduction to most players. Kai Budde was a little confused about who he was when the feature match was called, but once you win a Pro Tour, people other than Kai tend to remember your name -- at least for a little while (sorry, Michael Loconto).

Roel Heeswijk and his fellow Dutchies, on the other hand, are known to practically no one. Both Roel and Jasper Blaas have attended a couple of Pro Tours, achieving no real notable finishes, but that didn't stop them from compiling a 6-1 record here in Atlanta.

A flurry of mulligans kicked off the match, with Heeswijk taking three of them on the draw and Shu tossing one back himself before laying an Island to start the match. With the slight delay of the players moving to the feature match area and all the shuffling, 10 minutes had passed before the first land was played. Komuro started the action on turn three with a hasty Ronin Houndmaster, followed by Brutal Deceiver, a spirit that was immediately Rended. Ninja of the Deep Hours plus Phantom Wings put Komuro way ahead in the card advantage race and a few perfunctory attacks later, it was on to Game 2. It's difficult to mount much of a defense from a four-card hand, particularly when land flood sets in behind it.

One entertaining moment from Game 1 came from the death of Roel's Dripping-Tongue Zubera. At first he asked the judges for a token, but when none was produced, he shouted, "Jasper... token! Menno, please," to teammate Jasper Blaas. A moment later, classic Dutchie Menno D's latest DCI card was on the board, appropriately representing a spirit. 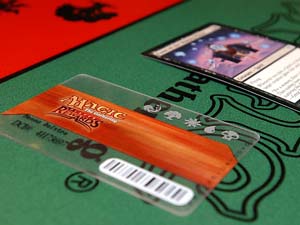 Luckily for Roel, his teammates both won their first games, giving the Dutchies the early lead.

Komuro kept a three-Mountain, all-blue-spell hand for Game 2, but plucked an Island off the top on turn one like a champ, letting him cast Soratami Cloudskater on turn two. Roel cast Loam Dweller on turn two and then Kami of the Waning Moon on turn three, putting another land into play from the Dweller trigger.

Komuro attacked with his Cloudskater, using it to throw down Ninja of the Deep Hours when the moonfolk went unblocked. Kodama's Reach let Roel put three additional lands into play that turn, giving him a 7-4 advantage over Komuro. Roel cast Neko-Te, looking to push some damage through and stymie some Komuro attackers, but Consuming Vortex plus a ninjutsu'd Mistblade Shinobi left his side of the board creatureless, and gave Komuro a stacked hand. About this time, Sasagawa evened his match at one game apiece.

Returning to the match at hand, Komuro played Honden of the Seeing Winds, meaning Roel would need some serious help if he was going to pull this one out. Scaled Hulk showed up right on time, bashing for six plus one when Wicked Akuba joined Roel's squad on the next turn.

Jasper Blaas defeated Shimura 2-0 in the C seat, giving Roel hou je Smoel a 1-0 lead in matches. Meanwhile, Heartless Hidetsugu made its first appearance of the match for Komuro. The board stalled as Roel looked for a way to do the final seven points of damage to Komuro without dying himself on the counter-attack -- a situation that was further complicated when Komuro cast Ronin Houndmaster and another Deep Hours on the next turn.

Sasagawa won the A match, leaving the outcome of the match riding on Roel's ability to pull out this close one and send the match to a rubber game. Komuro used Heartless at the end of the Roel's turn to drop the Dutch player to seven, and then attacked with Soratami Cloudskater, used Hidetsugu again, and cast Yamabushi's Flame to deal the final points of damage.