many players can a color support? In one of the craziest turns of events, the draft between Gabriel Nassif, Gab Tsang and David Rood vs. Osyp Lebedowicz, Gerard Fabiano, and John Fiorillo, the two teams had five red drafters out a possible six. Only Fabiano didn't play red, instead opting for a blue-white build.

While Nassif was feeling confident with his two Matsu-Tribe Snipers, Lebedowicz didn't like having even two red drafters on his team. He said that the draft was so unusual because of the shear quantity of red cards that it threw his team off their gameplan.

Nassif appeared in the feature match area first and commented, "I don't know how he can possibly win."

When Fabiano sat, he asked, "Would you switch decks with me?"

"No, would you?" Nassif replied. "What .you don't answer? I answered you, that's not fair."

Fabiano used Eye of Nowhere to bounce the first land of Nassif's, forcing him to discard. Then he played out a Waxmane Baku. Nassif fought the land bounce with a Sakura-Tribe Elder. Fabiano attacked into the snake and played a Split-Tail Miko. 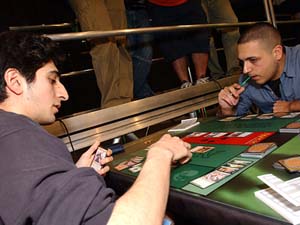 Who wins in this fight? Certainly not posture.

When Fabiano's Waxmane Baku gained a counter, Fabiano asked Nassif for one. Nassif pulled out a $50 bill and placed it on the Baku. "No counters and you get 50 bucks," joked Nassif.

Nassif played out a Kodama of the South Tree to fight back against Fabiano's growing team of creatures. Fabiano attacked with his Moonlit Strider and Waxmane Baku, having five untapped mana. Nassif thought a long time before taking 3. Fabiano then played a Ghostly Prison to hold back the South Tree.

Nassif sent in the Tree anyhow and played a First Volley to kill the exposed Split-Tail Miko but Fabiano sacrificed his Strider to save the little Fox Cleric. Nassif then played out a Matsu-Tribe Sniper to hold off the assault.

Fabiano traded his Miko for Nassif's Sniper while the Tree continued to swing.

"No, not really," said a dejected Lebedowicz.

Meanwhile, Nassif put down a Gnarled Mass to go with the Kodama of the South Tree. Waxmane Baku was Fabiano's biggest threat until he drew a Quillmane Baku.

Nassif played a second Tribe Decoy with the life totals Nassif 8 and Fabiano 7.

"There are 40 cards in his deck, not 60. He is not invincible," said Osyp to Fabiano after finding out that Fiorillo had won.

Nassif revealed Blind with Anger, targeting the Waxmane Baku. The Sniper and Baku double-blocked the Quillmane Baku so Fabiano put all of the damage onto the Sniper to keep his own Waxmane Baku alive.

Fabiano kept himself alive with a Shining Shoal for 4. The life totals were tied at four but Nassif kept the pressure up with a Rootrunner. 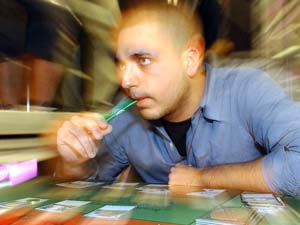 Fabiano could only dodge Nassif for so long.

If Fabiano could draw a big Spirit he will have potentially stolen the game. He drew Mystic Restraint to tap down the Rootrunner but it wasn't enough.

When Nassif went to attack Fabiano tapped the Kodama of the South Tree. Nassif attacked with the Gnarled Mass. It would have been one damage short of killing Fabiano but Nassif had a Serpent Skin to finish off the game.

Osyp finished losing to Gab Tsang, so now Fabiano would need to win both games in order to keep the NFC in contention.

Fabiano took his opening hand and shook his head. "Mulligan," he said.

His six-card hand was good enough and kept. Nassif looked at a hand of no Forests but kept anyhow. Once again Fabiano started off with an Eye of Nowhere to send home Nassif's first land. Nassif discard a Venerable Kumo after much consideration.

When Nassif finally did get to two lands, he played out a Matsu-Tribe Sniper followed by a Kodama's Reach to re-establish his mana base. Fabiano hadn't played anything following his early Eye to Nowhere.

Finally he started in with a few spells. He put the Sniper into Mystic Restraints and Thoughtbind on a Burr Grafter. Nassif was bringing out the beef with a Scaled Hulk.

Fabiano answered with a Moonlit Strider and a Waxmane Baku. The Scaled Hulk came across for 4. With seven mana available all Nassif could manage was an Orochi Ranger.

The Ranger blocked the Waxmane Baku but Fabiano had a Blessed Breath to save the Baku and add a counter to him. The Scaled Hulk came across again and Nassif played an Ogre Recluse off the top of his deck.

Fabiano used his Waxmane Baku to prevent the Ogre from blocking as he dropped Nassif down to 15 life. Nassif was able to swing with the Hulk. During the end step Fabiano bounced the Hulk, giving his Baku another counter.

Before Fabiano could declare his attack, Nassif used Blind with Anger to attempt to take the Baku. Fabiano used his Moonlit Strider to protect the Waxmane Baku. He then played out a Silent-Chant Zubera.

Serpent Skin saved the Ogre when it was hit with Shining Shoal. Waxmane Baku tried to stop the Recluse and Hulk but they wouldn't stop coming. A Feral Deceiver for Nassif was too much and Fabiano extended his hand.