Baltringues de Lupidia entered the round of four in the top spot, but they may find themselves with egg on their faces. You see, they drew with We Add in Saturday's final round to make sure they'd be the fourth seed -- and therefore face them in the semifinals. Apparently they're tougher than they look. After the draft, Adam Chambers' match against Camille Fenet looked like a foregone conclusion. Les Baltringes really needed Nicolas Bornarel to take down Andrew Pacifico, and hopefully Ben Caumes would find a way out of his mire with Don Smith. 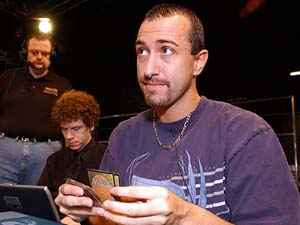 Pacifico and We Add had been playing masterfully since the LCQ.

Pacifico won the right to play first and led with Devoted Retainer and Ember-Fist Zubera. Bornarel had a pair of Goblin Cohorts, the first trading with the Zubera. Pacifico dropped Cage on the other and hit again for one. Bornarel's follow-up was a modest Ashen-Skin Zubera.

With Pacifico's next play of Moonlit Strider, he firmly blunted Bornarel's offense. Bornarel had no play on four land. The little Retainer kept on trucking. Bornarel drew for his turn and sighed. He was supposed to be the beatdown here.

Pacifico untapped and played out Waxmane Baku. Bornarel wasted no time showing Rend Spirit. Pacifico thought for a moment, and decided to rescue with his Strider, Soulshifting back his Zubera. Bornarel untapped and threw down a second Rend. Pacifico shrugged and sent his Baku to the bin. Bornarel got in there with Big Zubs.

Pacifico drew Ronin Cliffrider. With six lands at his disposal, he decided to wait and drop his Ember-Fist. His other card in hand was Candles' Glow. Again, Bornarel had no play. He watched with a grimace as Pacifico added Harsh Deceiver to the board. On his turn, though, he let out a little excited noise.

He busted out Nezumi Ronin, and responded with Hanabi Blast on the Zubera. Pacifico thought about saving with Candles' Glow, but allowed it and shot Bornarel for one. Unfortunately for Bornarel, his Hanabi Blast didn't feel like being bought back, and ended up in the bin. Pacifico ripped a second Cage for the rat and got in for another point. Bornarel had no play. Pacifico hit land number seven and played out his Cliffrider with Candles' Glow back.

Bornarel turned up what he thought was a good one: Blood Rites. He tapped out and sacrificed his Zubera to take down the Cliffrider and the last card in Pacifico's hand. Things did not go as planned. Pacifico save with the Glow, then untapped, grabbed his Cage off the Nezumi Ronin and shot it down on his way through. Suddenly Adam Chambers bustled past.

"I won my match." Adam Chambers informed his mates. He actually couldn't get out of the Feature Match Area fast enough. He didn't even look back as he said it.

Bornarel finally got to dispatch the Cliffrider and played out Kami of the Waning Moon. Pacifico made a Kami of False Hope and swung in. The opposing spirit blocked and then shot the Retainer. Bornarel made a Goblin Cohort. Pacifico flipped a land on upkeep to power up his Deceiver and swung with both, losing his Kami and hitting for two. When Borneral did nothing on the following turn, Pacifico tried again. His Deceiver went unblocked, and rather than accept just two damage, he went for the kill with Devouring Rage. Bornarel showed him Torrent of Stone, finishing off the Deceiver with the help of a thrown Cohort.

Bornarel untapped and found a Nezumi Graverobber. Unfortunately, Pacifico's graveyard was stuffed, so flipping it wasn't going to be easy. Worse, his life total was on the wrong side of 'precarious.' Pacifico Caged him up and dropped Ronin Houndmaster. Bornarel thought and thought, and decided he'd fall to two, hoping to draw a different creature to aim at the Houndmaster.

He threw the Graverobber then passed the turn with nothing to do. Pacifico pulled up the top card of his deck and dropped it on the table: Hanabi Blast.

While shuffling for Game 2, Don Smith reported on his match.

Now, Fate likes to be cruel, so it's no surprise that Pacifico found himself parising to five for his second game. Bornarel led with Graverobber. Pacifico let out a sigh and passed his turn without playing, but then dropped Terashi's Verdict on the incoming 2/1.

For a five-card hand, he was showing a lot of strength. While Bornarel did nothing he dropped Brutal Deceiver and Harsh Deceiver on successive turns. But then the turnaround came in the form of an end-of-turn Torrent of Stone followed up by Three Tragedies to leave Pacifico handless and relying on his 2/2. His first draw was a Cage that sequestered Bornarel's next play of Okiba-Gang Shinobi. Then a Kami of False Hope while he got in for two.

Bornarel made a Nezumi Ronin. Pacifico's hit a land and passed it back. Yamabushi's Flame took out the Deceiver and Bornarel got in for three. He followed up with Kami of the Waning Moon. Pacifico plucked Hundred-Talon Kami off the top. Neither player made a move for two turns, Pacifico continuing to draw useless lands. Finally Bornarel dispatched the Hundred-Talon with Rend Spirit, giving Pacifico back his 1/4, but temporarily clearing a path for four damage. Pacifico replayed his Deceiver and lost his 1/1 to First Volley. 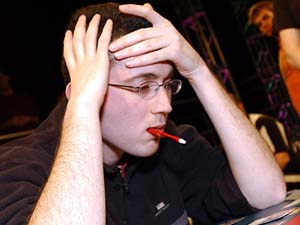 Bornarel ponders his board position.

The weak beats continued as Nezumi Ronin stayed home. Pacifico tried a Cliffrider, but Bornarel was ready with Hanabi Blast. Again, it refused to stay in his hand. Pacifico plucked Nine-Ringed Bo to take out the Kami of the Waning Moon and hit for two with his Deceiver. Bornarel did nothing and accepted another two, then he came down with Gutwrencher Oni. Pacifico picked up his Cage and put it on the big Demon, then passed the turn.

Bornarel sped through his upkeep and draw step, forgetting to discard a card to his Oni. Unfortunately, he had drawn his card for the turn. Head Judge Sheldon Menery was called in. Back in Pacifico's day, this kind of thing carried with it an automatic game loss, so he was slightly surprised when the Head Judge backed Bornarel up to his upkeep, allowing him to discard and carry on. Of course, the reason this repair was so easy was soon clear: his hand was two lands and the card he drew (Nezumi Cutthroat), so he would obviously discard a land even if he'd held Cutthroat and land.

With that sorted out, Bornarel hit with his two rats. Pacifico naturally blocked the Okiba-Gang and took three. Down came the Cutthroat. Pacifico drew Devouring Rage, then hit for two with his Harsh Deceiver. Borneral hit back with his fear rat. This time around Pacifico didn't have a land on his deck, so he had to sit back and take two while Borneral added Sokenzan Bruiser. A Candles' Glow bought Pacifico another turn.

He drew Moonlit Strider and looked at his board of lands. He played it, then sacrificed it to give his Deceiver protection from red and get back his Zubera. He played it and attacked with the Deceiver. When Borneral double-blocked, he went to Devouring Rage, then realized his error, and scooped.

Heading into the final game, Smith was happy to report that he had evened things between himself and Caumes. Now either of them needed a win and We Add would be on to the finals. 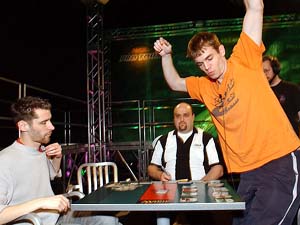 Smith's win sealed it for We Add.

Now it was Borneral's turn to mulligan, but he stopped at six. He led with Goblin Cohort and then Hearth Kami, getting in for a quick two past Pacifico's Kitsune Diviner. Pacifico's third turn brought out Nine-Ringed Bo right on time to dispatch the Kami. Borneral followed up with Nezumi Cutthroat. It got to hit once while Pacifico made an Ember-Fist Zubera, then it got Caged.

Before Borneral could draw his next card, Don Smith stood up from his table and stepped over to Pacifico. He'd won his match, giving We Add the win and a spot in the finals. Apparently this LCQ team wasn't quite ready to call it a weekend.