Spin have come a long way since their Top 4 at Grand Prix-Osaka in January. This team of close friends seems to love to game together, and they had an awesome instructor for this tournament in Japanese Team Rochester master Itaru Ishida. 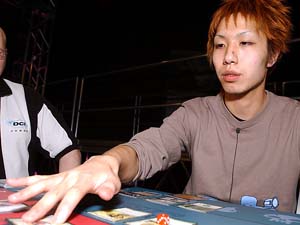 Tomoharu Saito had a tough matchup against Nassif.

However, coming out of the draft, they found themselves in a very difficult position. Gabriel Nassif's green-red deck looked to be a near lock for victory over Tomoharu Saito and his underpowered black-green deck, and David Rood's blue-red double-Glacial Ray deck looked to have a large advantage over Kenji Tsumura's blue-white deck. The only place where they managed to put Nova into a tough spot was giving Kumano, Master Yamabushi to Tomohiro Kaji against Gab Tsang and his black-white deck that had precisely zero answers to a resolved red Masticore.

Nassif's opening hand was gassy except for the fact that it had no green source to go along with his three Mountains. A fourth Mountain off the top was not what he was looking for, but his turn-two draw yielded a Forest, just in time to toss down Humble Budoka to Saito's Sensei's Divining Top. Ah the Top, source of infinite debate and the biggest detractor to World Magic productivity since Brainstorm and Sylvan Library.

Nassif paused to consider his options for turn three, staring at the Kami of the Hunt and Ronin Houndmaster in hand before sending with the Budoka and casting the Kami. Saito attacked back with his Ronin, making Nassif pause again (this will probably happen a lot this match -- Nassif tends to be very deliberate), before letting the rat through unblocked. Saito followed with a Sakura-Tribe Springcaller. From there the game hit a stall, as both players battened the hatches while calling reinforcements and waiting for some source of advantage. 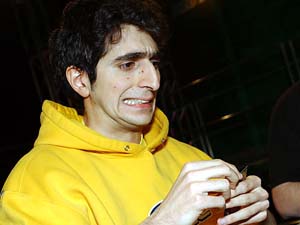 Nassif actually complained about the pace of Saito's play at this point, and rightly so -- Saito was actually taking minutes (and sometimes many of them) every time he activated his Top. The table judge briefly conferred with another judge before asking Saito to speed up his pace of play.

Saito finally cast Traproot Kami, giving his Kami of the Hunt +1/+1 and attacked with Nezumi Ronin and the Kami. Nassif traded Humble Budoka with the rat, and dropped to 14. Honden of Life's Web looked to be a nice stabilizing force for the Frenchman, but Genju of the Cedars changed all that, giving Saito a burly attacker excepting the fact that he only had one Forest. Nassif double-blocked the Genju with Kami of the Hunt and Houndmaster, trading the Houndmaster for the Genju, but Saito had another Forest to replay the Genju. Things were looking bad for the Player of the Year until he plucked a card, smiled at his good fortune, and then played the trump in Ryusei, the Falling Star. Saito would have to find a way to win through the burly 5/5 flyer because if he didn't, Ryusei would wrath away his whole team.

Kiku was summoned into play by Saito as if divinely brought forth to the top of his deck, so Nassif implemented the dragon beatdown plan, looking to force Saito to kill the Red beastie and drastically change the dynamic of the game. Saito saw this likely result as well and chose to send with his entire team (including the normally pacifistic Petalmane Baku) to get some damage in before the board cleared.

Nassif was having none of it, making good trades for his side, and daring Saito to blow things up with Kiku, which he did before playing a Wicked Akuba. Nassif had been stockpiling some dudes himself, and cast Humble Budoka plus a busty Ogre Recluse. Gab's draw was also a saucy one in the form of Devouring Rage, an utter beating with Honden of Life's Web churning out angry food.

Nassif forced Saito's lone Forest to trade with his Recluse, opening the door for a lethal attack on the next turn. Rood reported in that he had won his match already, and Tsang pulled an improbable Game 1 win for himself, giving Nova a big early advantage, one that was stretched further when Nassif put a notch in his own win column as well.

Interestingly, Nassif brought out the sideboard for Game 2, taking out two Sokenzan Bruisers for Kusari-Gama and a Harbinger of Spring. Seeing as how this was a Rochester Draft, that sort of shifting is a little unusual, but One Spin actually had to audible their colors twice during the draft, the last time when Kumano was opened by Kaji, thus Nassif thought Saito might be running Mountains instead of just playing green-black. Over in the A seat, Tomohiro Kaji evened his match at one each on the back of Kumano.

Nassif's hand for Game 2 was Iwamori, Honden of Life's Web, Sosuke's Summons plus Yamabushi's Storm and Ronin Houndmaster. He'd need a bit of help in order to make a go of things, but kept it anyway. Saito played a turn-two Budoka Gardener, while Nassif drew the Mountain he needed and played a turn-three Gnarled Mass after Saito Reached for two more lands. Saito used his Gardner to gain an even bigger lead in lands and cast Orochi Sustainer plus Gibbering Kami. Nassif just took that as his cue to drop Iwamori of the Open Fist on the board and then turn away, hoping Saito had no free legendary creature to throw down. Saito grimaced and did nothing, giving Nassif a board of fatties even a Turian could love. 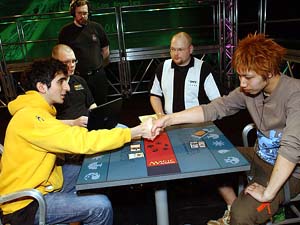 And with the handshake, Nova was on to the Final.

On his turn Saito had some decisions to make, using his Top to draw an extra card from his deck and then casting Loam Dweller before sending things back at Nassif, leaving seven power of blockers on the board. Nassif cast Ronin Houndmaster and brought the noise. Blockers plus Yamabushi's Storm left Saito bereft of any men, and his one card in hand would have to be amazing to pull this one out. A Kami of the Hunt from Gab and a grip of lands displayed by Saito meant that Nassif and his Nova teammates were off to the finals of Pro Tour-Atlanta 2005.