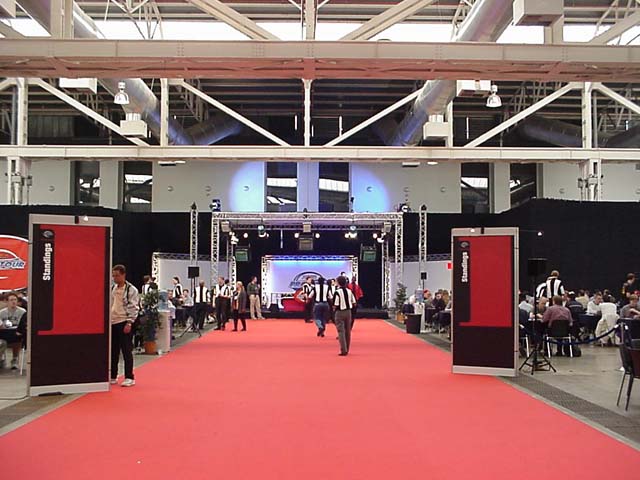 Pro Tour banners hung from the streetlights for blocks around La Farga L'Hospitalet. This was mostly to help players make their way from the Metro on Barcelona's twisting roads, but it gave the event a real presence. It was as if the conference center could not contain this much raw Magic talent, and the weight of it would tear down the doors and flood across the city. Unsuspecting citizens would start Rochestering like a bunch of frenzied Finkels. It's hard to deny the excitement that comes from seeing the best square off. The night before the roar of three hundred pros vying would fill these halls, thirty-two of the elite assembled for the Masters. Their group was completed by Satoshi Nakamura and Tuomo Niemenen who survived six rounds in the Gateway.

The field was vastly different than that of Tokyo. Instead of red-black control and green-red beatdown, the majority of the decks ran Islands, neatly split between Go-Mar and Domain styles. This worked out well for Jay Elarar, who ran a deck with four maindeck Kavu Chameleons on advice from his "Brazilian Connection" Damian Brown-Santirso, the man who supplied him with his Top 8 Chicago Skies deck.

The competition went well into the night, capped by a marathon match between Benedikt Klauser and Jon Finkel that was described by Randy Buehler as "One of the best games of Magic I've seen in a long time."

The Pro Tour was just as electric. Several pros noticed that white-green was a criminally underdrafted color combination, and capitalized. One of these players was Kai Budde, who was the leader after Day 1, undefeated alongside Dan Clegg. Budde swept his first table with W-G, helped along by Gary Wise's mana difficulties in their Round 4 match. It took nine minutes in total.

Igor Frayman got his first taste of Planeshift from a card list he read en route to Spain. Even with this mammoth disadvantage, he ambled into Day 2 with 15 points. He wasn't the only absentee to come back to the Big Game. Magic's Old School came out in style, with Shawn "Hammer" Regnier ending the day 17th, Thomas Andersson in 55th, and Matt Place in 77th.

The Spanish showed their prowess on home turf, sending eight people into Day 2. They face an uphill battle, however. Alejandro Dominguez is the highest ranked among them at 74th.

The race for Pro Player of the year intensifies going into Day 2. Of the Top 5, Kai Budde is in first, Mike Pustilnik is fifth, Scott Johns is seventh, and Kamiel Cornelissen in 34th. Zvi Mowshowitz ended at an ignominious 319th, missing Day 2, as did Tokyo Finalist Tsuyoshi Fujita.

As well, the Rookie of the Year race is by no means finished. The Top 3 players, Lawrence "The Creecher" Creech, Katsuhiro Mori and Danny Mandel have all made second day, and if any of them Top 8 they'll probably take the title.

A number of players failed to post records that matched spectators expectations. Matt Vienneau, the unwitting champion of two Invasion Block Limited Grand Prix, ended up 3-4. Rising star Ryan Fuller edged into Day 2 with twelve points. A number of Masters Top 8 players made quiet exits at 1-4 to practice their upcoming matches. Damian Brown-Santirso, the Brazilian Connection himself, ended up 169th.

Jon Finkel had himself a full plate, what with a term paper due during the fifth round of play. He proved up to the task, submitting the paper while finishing Day 1 in 76th and making the semifinals of the Masters.

Two disqualifications have been handed out so far this weekend. One to Raphael Levy during the Gateway for presenting an advantageously unsideboarded deck to his opponent, the other to Xavier Petit for misrepresenting information to judges in an attempt to gain advantage. No penalties were handed out to the players who legitimately drafted six Shivan Zombies and four Probes, respectively.